Today I'm lucky enough to have another guest post from Rachel, who shall forever be known as The Wee Lady after her last fabulous post which allowed us all to find laughs in the otherwise depressing topic of urinary incontinence and/or retention. Go black humour, it's the only way to roll. Rachel articulates what many of us encounter, the gate-keepers. For better or worse, we are at the mercy of those who hold the treatments and sometimes no matter how well we play the game it doesn't always go in our favour. Or worse, hope is pulled away at the last minute due to circumstances beyond our control. For those of us with a progressive form of this disorder, "wait and see" is simply not a viable option. 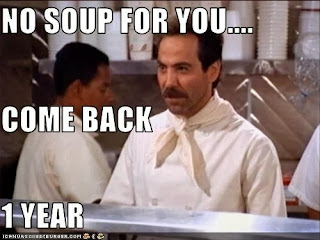 In the past couple of years, my care has been transferred from my Cardiologist, to the General Medicine department of our local hospital.  My General Physician is a specialist doctor who coordinates the other specialists who care for me and they all consult with him as the primary doctor who oversees my case.  In addition to the General Physican, I see a Neurologist, a Neural-Opthalmologist, a Gastroenterologist, a Cardiologist and a Urologist. They all see me through their out-patient clinics unless I happen to be admitted for something. I really like this model.

Until recently, my Main Man (doctor wise, not to be confused with my Main-Squeeze, the delectable hubby) was a really lovely, really clever, experienced physician who was involved, interested and not afraid to admit that he needed to find out more. He wasn’t threatened by me, or my lists, my folders or my frequent email attachments.  He wasn’t even threatened by my six foot frame and it’s wobbly instability.  He understood that I wasn’t trying to be an annoying patient.  I was just trying not to be a patient at all. He suspected that I have AAG.  Autoimmune Autonomic Ganglionopathy.   The idea is that the immune system has turned against the Autonomic Nervous System in error.  It begins to pick off autonomic ganglia, preventing the usual messages from getting through, throwing out homeostasis. And this thinking meant that he was open to the idea of my problems being treatable.  That concept, for me, for anyone facing a progressive illness, is the equivalent of being a kid in a candy store..  It’s the nirvana of chronic illness. The delectable hope! Shiny, sweet gorgeousness!

But oh! There I was in the candy store, staring up at the jars, salivating. And it occurred to me that I couldn’t just buy what could make my dreams come true.  I didn’t have my little snap purse. The benevolent gentleperson with all the buying power was about to leave the store.  And he did.  The hospital moved him into another department and transferred my care to a new General Physician. One who hadn’t gone through the lengthy discussions with me about the candy and the possibility that maybe, I’m worthy of having a bag of bulls-eyes (plasmapheresis). My new Main Man prefers the sit-and-wait approach. Main-Squeeze and I at first, politely inferred; then, referred directly to the last doctor’s findings, suggested and finally pleaded for some more action, some attempt or nod towards trying.  He just took off his glasses, said we need to face some realities. Sat back and said that he would like to simply ‘watch’ my progression. Candy shop shut.

The research in this area shows that if indeed I have AAG, the nerve damage that continues to occur over time is unlikely to be able to be reversed.  So I don’t want to wait while he observes more progression.  I want to arrest the progression.  I need to, in point of fact.  Because, like all of my fellow sufferers, I have a life that I need to get back to. A husband who wants a partner in every sense of the word.  Children who need their Mum in ways and at times that I can’t always be there for them.  And a host of other brilliant things that are out of my reach with things the way they are.  Things that would have been, if I hadn’t got sick.  I’ve got some potential to fulfill.  And although the new Main Man doesn’t know it, I am worthy of the attempt.  Aren’t we all?  There aren’t very many of us.  It’s not like there’s going to be a mob looting that candy shop.  And we are very polite, on the whole.  Except for inside our imaginations, where occasionally, we slap people who don’t want to try to help.

I don’t have the antibodies which prove AAG.  In fact, 50% of AAG sufferers don’t.  But there is still a good chance that I would respond to immune modulation therapy.  So, I am standing in the candy store, alone.  Looking up at that candy.  Just wishing that this new doctor would come striding in and say “A bag of bulls-eyes for the little lady. Quick, now, don’t delay!  She needs them!” And maybe, you know, it could happen; he could make my dreams come true.