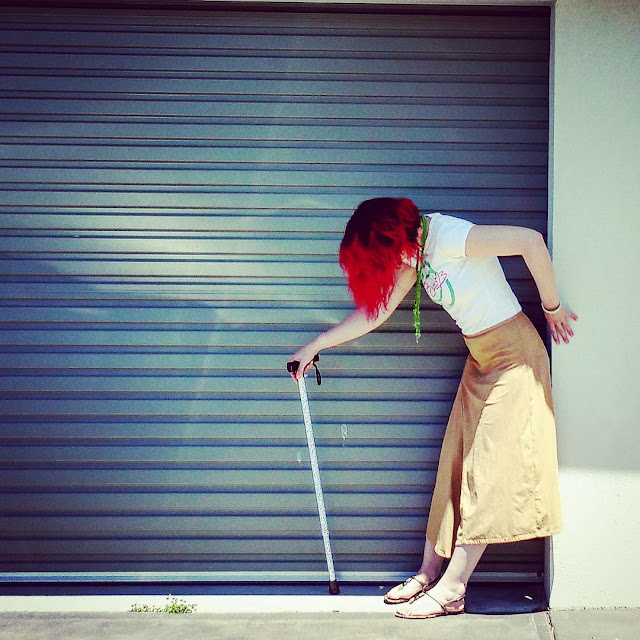 [Image: I'm slumped over resting against the roller door and bracing against the white wall. My hand is extended holding my walking stick. I am wearing a long tan skirt, white t-shirt and green jewellery. I am half in shade, half hot sun. You can't see my face for my red hair which has fallen forward.]

I can hear more than feel the breeze coming through the open door. Beyond the dusty fly wire the leaves of the trees rustle, disturbed by the ebb and flow of small invisible waves. The security door is doing it's job keeping out not just burglars and miscreants, but the breeze that sends the white roses bobbing outside the loungeroom window.

The dull whirr of the air conditioner is all noise no substance. Evaporative cooling, cheap to install and useless when there's even a touch of humidity in the air. A loose print bangs softly against the book shelf and the waist high fronds of the Bangalow palm in the entryway shudder. Freyja lies listless on the floor. Her discontent clear in growled mutterings and halfhearted attempts at movement. The heat stubbornly maintains its hold on the house.

Not to say outside is that much of an improvement. Clear blue skies look straight out of a travel advertisement. Photogenic grey-green gums screaming Australia to an overseas audience. You can feel the breeze, but a moment in the sun is to feel an oppressive weight upon my whole body.

The heat is here and my world shrinks.

A body that cannot cope with heat is a body not designed for the Australian climate. I hear the politicians argue about climate change in terms of economies, in terms of fossil fuels, in pontific terms that only they seem to truly believe. But never the human cost. Never what it will mean to those of us whose bodies are already struggling in the heat of today, let alone the heat predicted in 50 years time. Whose worlds collapse in upon themselves each time the mercury rises.

Yesterday I dressed to go up the street only to realise that the time required to do all my and my son's errands would far exceed my ability to function in the heat. Not that he wouldn't push me in my old wheelchair. Not that some of the shops aren't airconditioned. But the drain of the heat. From the shuffle from the house to the car. The heat in the mobile greenhouse that serves as transport. The move from car to shop. In and out. Over and over. Each minute in the heat sapping strength. Not just from that day but the subsequent day and the day after that. The heat takes out credit for all the days after. And it never repays.

It holds me down. It suffocates. It seeps into all my pores and weaves it's way through bone and flesh. Stealing the strength and the functioning. I move through slow setting concrete. Dragging my limbs, my lungs, my mind. It's harder to think. It's harder to interact. My focus sharpens and wavers. I end up stretched too far from the smallest effort. I react like an injured animal when spoken to. Teeth bared, sharp words spit as the remnants of my reserves slip from flaccid fingers. The tendrils of heat reach deep until an amorphous agitation is all I can feel. Brain and body no longer able to find a path out.

From my lowered vantage point on the lounge, a small side window perfectly frames a patch of blue sky and swaying gums. More appealing than the prosaic view I have upon standing where the same window affords a view of red bricks that form the back of our garage and a grey paling fence, but none the less isolating. Spring and Summer days may be beautiful but they mean chest pain and weakness, greying vision and shaking hands. They mean existing under ineffectual ceiling vents, devouring Hydralyte icypoles and the mind numbing, only slightly cooler, four walls that allow for some semblance of functioning. It means peaking out windows for a hint of the world. Short forays into the backyard to check on the chickens and back to the darkened house to listen to the dull rattle of loose prints and breeze through tree leaves. It means a ruthless dissection of time and reserves. Logistical analyses and bitter disappointment.

I can go here. But not there. Not two the same day. Not two consecutive days. Is it evening or day? How far? How long? How much? It always comes back to the cost.

18 to 22C the magic span of time where I function these days. Above or below I am a mess. And now we are set for months of above. Months of missed events and missed opportunities. Regrets and apologies.

I feel the weight in my bones and my heart. My sluggish mind plods along unable to find solutions.

It's 3pm and I am still in my pjs. Showering and dressing no where in sight. The temperature hovers the high 20s and I melt further into the brown leather. I'm supposed to be at an event at 5:30. It's a beautiful Spring day. Not a cloud in sight. A perfect beach day. An in the garden day. And a punishing day if your body is no longer capable of compensating for even a small rise in the ambient temperature.

I hardly sweat now. Even on the 40C+ days. A new medication I started earlier in the year means I now have at least a handful of odd patches where the nerves put in a half-hearted effort, but not nearly enough to cool me down. I feel like my chickens on the back door step, puffed out and puffing. Beaks agape. I chomp though electrolyte icepoles as they chomp their way through the fish gut iceblocks I just put out for them. Only to slump down again to await the evening drop.

The heat is here to stay and I will get through it. Just like the last 11 years. I'll step out into the world in short deliberate bursts and hopefully ED avoiding outings. I'll gaze out the open windows and listen to bird song through dusty flywire, while icepacks slowly melt on my neck. My world will be smaller and heavier. The burden for stepping outside greater. But I'll sip a G&T under my red umbrella in my back yard. I'll listen to the clink of the ice cubes on glass and feel the condensations drip down my wrist. I'll smell the mandarin peel as the oil slowly infuses the clear liquid. Chickens will be coerced into long cuddles and I'll pick cherry tomatoes off the vines in the garden beds. I'll lie on pillows and watch fairy floss clouds disappear as they pass over the edge of the red material above my head.

For a while my world will be small and my connections tenuous. I'll exist until the leaves start to brown and Autumn announces it's arrival in cooling temperatures and fire-coloured leaves collecting on my doorstep. And the reawakening will be celebrated.