Well Funkfest 2012 continues despite my best efforts. Whether it is my generally craptastic health, my brain that appears to have evaporated in the heat of Summer, or life which seems to persist in running full speed and flinging crap bombs at me at every opportunity, it appears that Funkfest will be here for a bit of an extended gig.

So between a broken dog, a broken me, a youngest child going in for surgery, a husband's 40th birthday and inundation by his clan, I'm not going to be up to blogging, or breathing and standing, over the next couple of weeks. 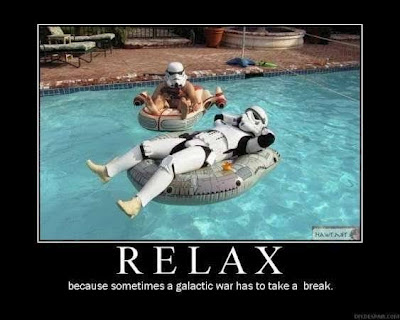 So I am taking a deep breath and opening up the blog to some guest posts.

You may get a good idea of my level of crappness by the fact I am even thinking of this. My control freak self is not good at relaxing my sphincter enough to allow others to play with my toys.

If you are interested in applying for the opportunity to guest post there are only a few requirements:

1) You must make me laugh. This is perhaps the most important criteria. As we all know a life with chronic illness is a life of absurdity. If the post elicits snort laughs or Poise worthy moments your chances of selection increase. Prolific use of sarcasm will receive bonus points.

2) Preference will be given to illness related posts. I'm not going to confine it to Dysautonomia as many of us have multiple illnesses. And lets face it who can't find a laugh in going arse up and flashing your granny undies at a check out, or attempting to put on compression hose with muppet arms. Catheterisation and colonoscopies are rife with humour and pretty much write themselves.

3) Short and sweet is good. I can't recall what I wrote two paragraphs ago so if it's long I will most likely pass out or be distracted by a bright shiny object, before I get to the end.

4) I am currently reading with one eye closed (aka clenched in bowel weakening agony) thanks to the persistent red hot poker that is lodged there, so easy to read, big font would be lovely.

6) References to classic scifi or horror will also get bonus points. If you know all the words to The Ballard of Jayne, (without cheating) you may just be a shoe in.

7) Send all posts (completed, not just a topic idea) to rustyhoe@livingwithbob.com

I'm looking for 6 blog posts which would give me about 3 weeks grace to try and relearn the breathing and walking skills I once had.


8) Okay I have more than 6 submissions already (man, you guys are quick) so I will read through them all and pick the final six at the end of next week.  Remember: To judge it fairly I'll need the whole post not just a topic or idea.

So what are you waiting for?

And to continue my funky theme.....

Gotta make a move to a town that's right for me.
Town to keep me movin',
keep me groovin' with some energy.

Irony of ironies. I am in a major funk and yet Funky Town is apparently the place to "keep me groovin' with some energy". Lies. Damn lies. Those catchy beats just aren't cutting it. No amount of keytars and 80's mullets are going to make this mood move on. 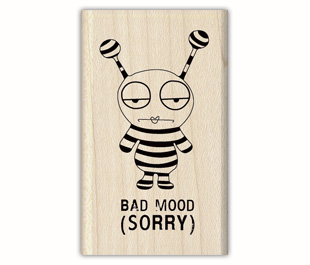 Fatigue has hit with a vengeance. As have migraines, chest pain, leg pain and back pain. Not only did my leg scan came back unclear, but I didn't even get a superpower out of the deal. If I have to be injected with radioactive material the least it could lead to would be a superpower. Hell even glowing in the dark would have been useful during my frequent nightly trips to the loo. Especially if I wasn't going to get any answers out of the deal. $500 later and my leg still feels like someone took to it with a crowbar. Fatigue also means that my brain capacity has hit rock bottom. A tweet is now akin to War and Peace. This blog post is just gibberish. And I am so proud to admit that I forgot to wash the soap off before I got out of the shower today. I am in major woe is me mode.

Avert thine eyes people. I am wearing my whinge on my sleeve today and it aint pretty.

It seems my autonomic neurologist was right and I hate that. Excessive laughing does indeed turn out my lights. As does singing. Prince did me in with his infectious beats. I survived Kiss but When Doves Cry was the kiss of death, literally, as my heart decided filling and emptying is overrated. Apparently singing and a beating heart is too complex for my body these days. Time to buy it one of those "I'm with stupid" t-shirts. Most days I'm okay with it, but of late it's starting to shit me. Laughter is the best medicine and now I can no longer laugh. Call me crazy, but that seems a rather harsh and stupid symptom for Bob to choose. The universe really has a perverse sense of humour.

For those who follow FB or Twitter you'll know that my furry shadow Thor has been unwell, and this has added an extra level of funk to life. Watching your beloved dog hardly able to walk, his rear legs collapsing, is heartbreaking. He's trialling steroids and they've helped a bit but he is still unsteady. Sadly he has also withdrawn. Where once I couldn't pee, shower or breathe without a furry shadow, now I'm doing it solo. Though Freyja is trying and has started to take over his companion duties and is now starting to wait outside the shower.  Unfortunately, she doesn't have quite his placid demeanour. My slow dressing is not to her liking and I now bear some lovely 'hurry up' claw marks on my belly, thigh and, OMG, map of Tassie. I did wake up to him asleep next to my bed the other day, but it was a one off and hasn't been repeated. This has not helped my mood.

I am now waist deep in funk.

Seems I am going to have to ride the wave.

But nothing says I can't pout and stamp my feet until it ends.

Oh man I can't even sing along to this. Bah humbug!

Ink on a page

Writing by hand is a feat of epic proportions these days.  To hold the pen. To form the letters. To string together the sentence. To push through the shaking and the weakness. But there is something magical about putting ink on paper. Somehow more permanent and tangible than anything typed on a keyboard. Something that makes the building ache in my arm all worthwhile. 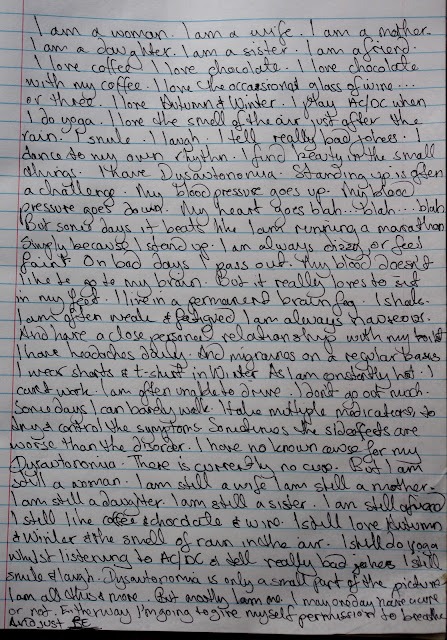 These are the words from my first attempt at a Dysautonomia awareness video.

Writing them out again reminds me once more that I am NOT my illness. Each letter, each word, proof that I am much, much, more.

Writing them again allows me to extend my middle finger to Bob (Dysautonomia). I may be shaking. I may be tachycardic, but I wrote it all out. 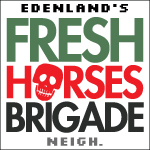 The View From My Couch: Sparkles 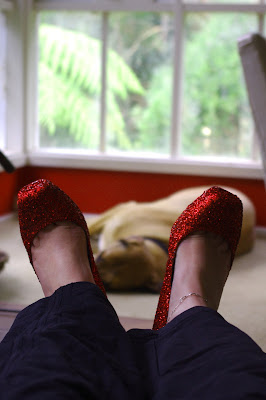 Today is one of those days that I'm totally exhausted. It's not normal tired. It's a complete bone weary kind of tired, where even lifting my head or typing these couple of lines is exhausting. It's when thinking is too much, and constructing a sentence leaves you needing a recovery nanna nap. It's a kind of exhaustion reserved for the chronically ill. A kind of exhaustion I never knew before Bob reared his ugly head.

The last couple of weeks, hell the last couple of days, have taken a toll. Technology debarkles, Summer heat and the added bonuses of extra non-Bob related injury and illness. Pre-sick I'd be fine. But these days it just saps me dry. I have posts and articles to write, email systems to fix, Dorothy Shoe Project newsletters to send out, and then there's the whole keeping my family running issue. It gets hard sometimes.

Yesterday I admitted that I have become somewhat (okay make that a lot) socially phobic over the last few years. It seems the isolation of chronic illness is not conducive to maintaining those skills, or at least your confidence in them. Especially as the years pass. Now whether or not I am actually shite at social chit chat I'm not sure. My own neurosis says "Hell YES". But it may be like riding a bike and I just need to get out there and do it. There are blogging conferences coming up locally and I am still umming and ahhing about going. Fear of small talk with strangers, or ending up flaked out on a floor are hard to move past. But the beautiful community of the internet stepped forward with words of support and encouragement. And that's what I love about this whole blogging, tweeting, facebooking world of ours. Strangers, people I have never met, may never ever have the chance to meet face-to-face, stepping forward to cheer you on. For no other reason than they care. I'm not sure if I'm going yet, but I know if I do I'll have a cheer squad across the world waving their pom poms and doing the splits, so a neurotic 38-year-old woman can make it through a day of social interaction.

Now I'm lying here flaked out on the couch. Old trackie dacks and t-shirt. Hair unbrushed and shower avoided. The eldest started Yr 12 today so it's my first early school morning since last year. It's going to take me a while to get my body to accept the new program again. Coming on top of a few weeks of extra poor health it may take a little bit longer than usual. I had to laugh though. The youngest (he doesn't start till Monday) came in and asked me a question. He saw me lying on the couch in my old and comfy clothes, rocking a whiter shade of pale, and didn't bat an eyelid at the fact that I was also wearing my Dorothy Shoes. My weirdness has now become normal.

Today I may feel like crap, but the view from my couch definitely makes me smile.

The more astute of you may have noticed Thor's cameo in between my sparkle clad feet. He has become a permanent, smelly and slobbery, shadow of late. Who needs a bp machine to tell me I'm crap when I have 90kgs of dog whose very proximity is an accurate indicator of my health.
Posted by Michelle Roger at 14:54 1 comment: