I've known today's guest poster Julia for a few years now. I've always been impressed by her sense of humour and determination, not to mention her amazing macaron baking skills. (Disclaimer: I may be somewhat biased by the fact that Julia rocked up to my room post-pacemaker surgery with a tin of freshly baked dark chocolate macarons. Yes, I can be bought with baked goods.) But this year Julia did something amazing, she ran 5km and raised $3,000 for POTS and OI research. As someone for whom walking to the end of my driveway is the equivalent of the Olympic marathon, I am still in awe of Julia's achievement. 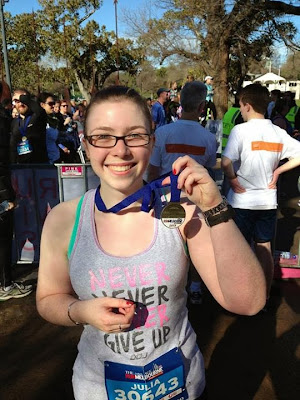 I am a self confessed drug lover. I could not live without my drugs. My AFL team has been termed the drug team. I have a pill vile necklace (thanks Claire). I even have been known to study drugs in my science degree. I’ve even made drugs!!! Sure it was aspirin in a chemistry prac and I got a shocking yield AND we weren’t allowed to take any of it but I still made it!
My deep love for drugs doesn’t mean that every drug has been kind to me. I don’t think I have enough hands and feet to count the number of meds that have either done nothing, or their side effects made me worse off.

Of course, this dedication for drugs has to start somewhere though. Without my current concoction of pills I would still be Year 12 me, fainting up to 6 times a day struggling to make it to school. Now I am 22 and in my fourth year of university and recently completed the 5km RunMelbourne in a mere 38minutes 44seconds!!!! (My personal best and ONLY attempt of running 5km)

The run meant more to me than anything before. It meant more than my enter score, what uni I got into and any result since then!!

This run was my evidence of improvement.

I knew in my mind I had improved, but I never had solid evidence in a certificate and a medal to show it. Now I do!!

I signed up for RunMelbourne after my cardiologist had the idea to get a group of patients to do it and raise money for the POTS and Orthostatic Intolerance research going on (link below). I immediately agreed to do it and thought it was the perfect exercise goal. I signed up in November/Decemeber of 2012. That gave me just over 7months to get there. My original goal was to be able to run the entire way, but as I started to train my body started throwing hissy fits and so I decided it was unrealistic. My new goal was to reach the end and run across the finish line.

I started my training with the treadmill. My knees (which I have already dislocated twice) did not like this idea one bit. So there went that plan. I thought, what’s better than fresh air? So thought maybe actual running outside on cooler days could be a good idea. After only a few hundred metres of mostly walking (and maybe 3x10second bursts of running) and stopping to sit down twice I decided this was not going to work either. I consulted my exercise physiologist (EP) who suggested we try walking outside and the cross trainer for speed (as this would take the impact off my knees). This was my plan!

For the next 5months I cross trainer-ed 2-3 times a week, I walked just as much and I had EP appointments weekly to track progress and work on building a good running core and leg strength to cope with the impact of running. These EP appointments and my actual EP were more important than my drugs (which is saying a lot). The appointments kept my workout routine going by nudging that little guilt factor to keep training and my EP kept up my motivation. She knew I could do it, so I believed her and so I’d train as hard as I could, despite many ups and downs.

At the end of the 7months I raised $3000 for POTS and Orthostatic Intolerance Research at the Baker IDI and more importantly I ran at least 2km (in 200m bursts) of that 5km and got an awesome time AND didn’t actually pass out (just had to take a brief lie down at the finish line). If that’s not the start of recovery, I don’t know what is!