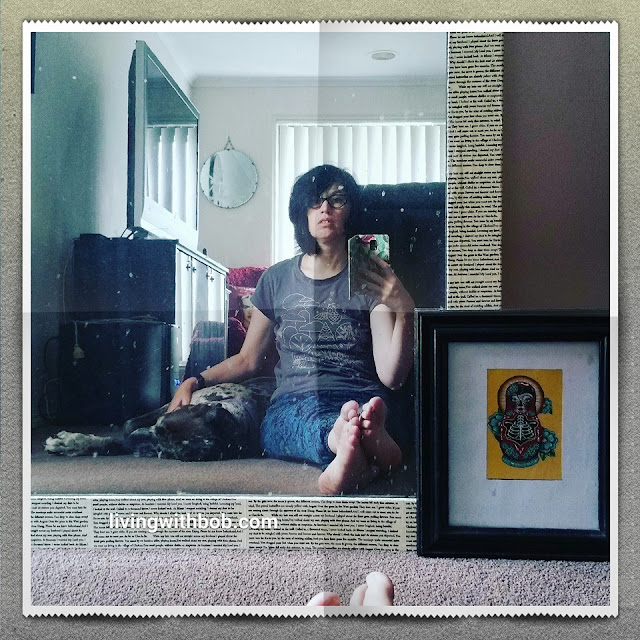 [Image: A woman, me, sits before a mirror with her merle Great Dane, and constant companion, Freyja. She's wearing grey and blue pjs and the picture is muted and dark. Her pale and tired reflection looks back, The mirror, like most of the house has Great Dane slobber all over.]


I can hear the television from the other room. The rhythm of the speech declares it sport in some form, though the content of the comments is lost in a melange of muffled sound. The world continues on oblivious to my presence on this side of the white MDF door. That this cheap and poorly fitted paper thin block could cut me off, rubs. Not that I can remedy the situation.

I lie supine, bound with invisible straps. Words fail as mind and mouth refuse to communicate. What simple ideas and words coalesce in my brain, unable to reach their destination. I am reduced to the most basic of function.

I don’t know where I am now. I try and pull myself together but the exhaustion foils my attempts. There are points where the unrelenting nature of illness catches up. Knocks you down and cages.

I’m coming out the otherside but the pull of the cage is strong. I worry that I’ll lose my footing and slip back. My windows of semi-functioning are small. Some days so small that simply trying to work out how to access the series I want to watch while lying on the couch is beyond me. Some days I get there. The programs indexed but I can’t recall what it was I wanted to watch. I end up overwhelmed by choice, too much data for my mind to process. So I close it down and watch the midday trash TV on whatever channel happens to be on.

The last three months are vague. Someone snuck into my brain and ran their thumb pad over the ink before it dried. A large smeared mess left in its place. I can’t recall what I’ve forgotten but I know I’ve forgotten things. Important things and small things. That knowledge I have, but the specifics. What was it I was supposed to do? Who was I supposed to call or email? Did I make promises to do things. Most certainly. I do that all the time. But what was it I promised to do? And for who? My brain is a mess. My cognition slowed and frequently disorganised. Trying to carry through a thought to completion beyond me more days than not. I feel like I should apologize, but to who? About what? I’m not sure but the feeling is there, pressing hard as I lie in bed at night. Reminding me that I’m messing up. But how do you remedy a situation that you no longer recall?

I have ideas. But they are gone as soon as they start to become clear. I can see them for a split second. And then…nothing. Just a vague impression that lets me know I did indeed have a thought, a plan, a something. Just enough to tantalize and frustrate. I was sharp once. I know that. But my confidence has taken a battering of late. The chunks of time, of events, of conversations that are missing add to my anxiety. I am an unsure about things that would never bother me before. Simple things and big. Am I saying the right thing? Doing the right thing? I feel stalled by a brain that has gone on strike.

So I have avoided my lap top. My emails continue to pile. I still find it hard to read and hard to respond. I’ve lost track between one paragraph and the next. But a paragraph is better than it was. It’s getting better but it’s excruciatingly slow. Nails on a chalkboard seemingly drawn out for an eternity.

I’m trying to be kind to myself. I’m trying to embrace the tiny windows. To live larger by living smaller. Simple, short and sharp. Focus on the joy part and embrace every second of it.

I sit with my chickens and play with my dog. I get dressed and I take silly photos. I’ve started back on Facebook, but I’m limiting my time. I bug my husband to go to the local lake and roll around through the park lands. I have the odd coffee out and just try and breathe.

I’ve started back with small exercises. I made pizza and sweet scrolls. I potted a plant. I rolled to the cow paddocks on an icy day and watched the pelicans and water foul swim on the dam. I stood at a council meeting and spoke my mind. A small glimpse of the old me. Exhausting and exhilarating. I wrote this blog post over weeks. A snippet here and a snippet there. But I wrote it.

Life is smaller, but the parts are more healing. I am resigned to patience. I will wait. My brain will come back. I will step back into my life.

For now. But not forever. 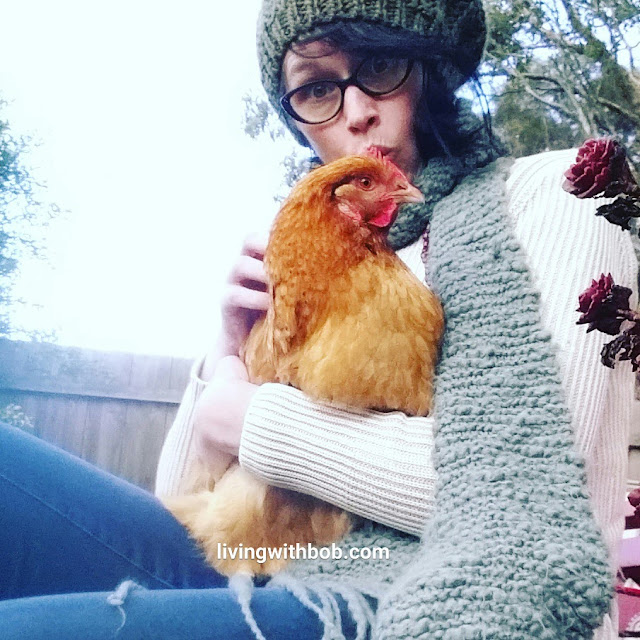 [Image: A woman sits cuddling a large orange chicken on a cold and dull Winter's day. She's pretending to give the chicken a kiss. The chicken, Sharona, is plotting the woman's death.]

*Thanks to Stefani, from Kind of broken: Lifestyles of the Young, Sick and Fabulous, whose own efforts prompted me to try and get this post into something resembling coherence. We're both going to get there. Of that I am sure.

Not sure why this didn't come up on the post. But hey. Matters little in the big scheme of things. But I've been listening to a lot of The Jezebels in my down time. I love this song, but there's something about the film clip in particular that I really love and feels invigorating.
Posted by Michelle Roger at 15:53 4 comments: