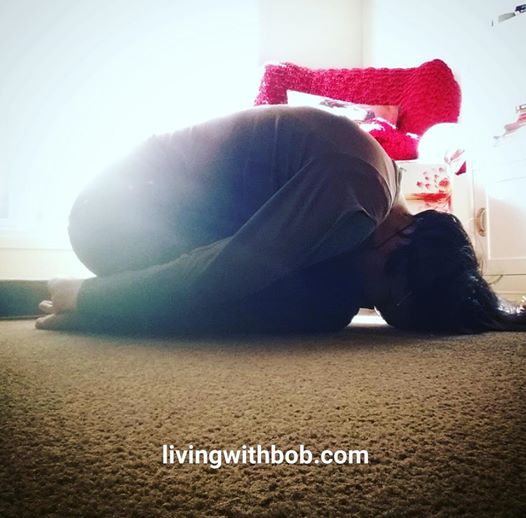 [Image: a woman kneels on brown carpet, forehead touching the ground in the yoga pose known as Child's Pose or Balasana which helps her gastric pain. Light shines from the window behind her, reaching a chair covered in a bright red throw rug.]

Eight minutes and six seconds. That's when my exhausted body said hell no. I lay on my yoga mat listening to Adriene, from Yoga with Adriene instructing me to massage my feet. A panting blob lying on green rubber matting not even capable of a proper savasana. Autumn sun was a lovely idea. The birds were chirping, the chooks scratching away in their yard. Even the workmen that have been at my neighbours for weeks were silent. Freyja came over and nuzzled my pasty face before deciding to take a poo less than a metre from my head.

And in that moment, the last couple of months were summed up neatly. Short lived joy followed by a large foetid mustard-coloured dog nard from which your slow and exhausted body struggles to escape.

I'm not quite sure what happened. The usual illness malarky was muddling along, when suddenly it all went pear-shaped eventually ending in a long overdue ED visit and a protracted recovery phase that still feels in its infancy.

I've tried repeatedly to take a deep breath and step out into the world only to be hit hard with payback. I've dressed up and gone to a cafe only to be forced to watch Mr Grumpy eat while I swallowed down vomit and ate antiemetics. Sit out with my chooks and recovery sleep is measured in hours. Yesterday I went out for 20 minutes, saw some cows in the paddocks next to our housing estate and today I woke up struggling to breathe or lift my head from the pillow.

Dip my toe in the world. Tell myself I can push through. And my saggy, stretch-marked, arse is where I keep on landing. Payback comes in metric fuck tonnes these days. And it can no longer be ignored. My droll husband tells me at least I look sick now, but even he finding little in that line amusing.

I have a collection of vintage cutlery. In amongst it all I have several tiny silver, salt and mustard spoons. Smaller than my little finger. My spoons have been in short supply of late and those I do have are reminiscent of those tiny salt and mustard spoons. So I've hermited. Built myself a pillow fort and tried to simply ride it out. When existing is hard the rest of the world has to be put aside to focus on trying to heal. And of late it's been pretty bloody hard.

I've tried to put pen to paper or fingers to keyboard and realised there was nothing. My brain too flummoxed to conjure up a coherent thought let alone hold that thought, coordinate fingers and get it onto a screen or piece of A4. Reading has equally been beyond me. And I have been bereft. Two of my greatest pleasures gone and my world far more claustrophobic.

I have known that I have cognitive issues for some time, more than just regular old brainfog. I had a brainSPECT scan last year that confirmed moderate impairment in the blood flow to my left temporal lobe, and mild to my right. I haven't fully processed what it all means, but it's effects are clear at present. My reserves are piss poor and now documented in a series of rainbow coloured scans. Add in worsening health and it would seem those reserves have been wiped out.

To respond to emails or messages is difficult in the extreme. Primarily because even reading them is exhausting. It's a weird place to be. That which was once my strength is muted. I have to believe it'll come back when this patch has passed. Losing my words isn't an option I want to contemplate.

This is the most I have written in over two months. It's been a struggle. But it's better than the usual staring at the screen, perplexed and frustrated, impotent hands poised over the keyboard, that has marked the last couple of months. So I'm taking it as a cautious sign.

The pain in my arms and wrists and the exhaustion that have come from these few words are worth it just to see them sitting there before me. They aren't perfect. But they exist. A small piece of me out there in the world again.

I wanted to say thank you to everyone who has sent emails and messages of support and concern. I haven't been able to respond and sometimes even read bar the first line or two, but those messages are much appreciated. I'm not really on social media at the moment except for a bit of Instagram where deep cogitations are not really required. I'm not sure when I'll get back on properly. I need to be ruthless in my energy usage to try and get on top of this again.


"Come on my friend
Drink to good times
Golden wishes
To your health and mine."
(PJ Harvey, You Come Through. 2004)