The Adventures of Bob and Dick.

".....and then he did a mould of her vagina!"  Not exactly the sort of thing you expect to hear when you're sitting in a little hospital courtyard sipping your illicit lemonade, but it made me both wince and giggle like a fool.  Which I'm pretty sure was her intention.  Because that's what she does.  She makes me laugh when it seems like there's nothing really to laugh about.  And she always knows exactly what it will take.  (Though, if discussing an art piece made entirely of plaster cast vaginas doesn't make you laugh you really have no sense of humour).

When I think back to that fateful day in 2008 when we first met I could never have imagined how important she would become to my life.  Who knew that developing Bob would lead to anything good?  And yet it did, and the fact that it was so unexpected makes it all the sweeter.

There we both were, in a small hospital gym, surrounded by a gaggle of grey-haired Franks and Merles.  The only two patients in the room who didn't have first had knowledge of the Great Depression.  We bonded over illness, over an upturned life, over a love of Johnny Depp, and being hit on by sleazy elderly Lotharios.

She knows only too well the world of doctors and sickness.  She's faced it head on, and left me in awe of her determination and courage.  And even during those times, she reached out to me, and to others.  Her generous heart and giving spirit always in evidence.

She is an expert at taking my mind off being sick.  It's often only after she leaves and my heart feels lighter and my cheeks hurt from laughing, that I realise what she's done.  In many ways it's not even that she stops me from feeling like the sick person, instead the sickness becomes irrelevant and she reminds me that I'm still here.

I don't know if there are any words to adequately describe what her friendship has meant to me over the last few years. I know I have struggled writing this post more than most.  And I know these few barely touch the surface.

But I am proud to call her my friend, and even happier that she calls me hers. 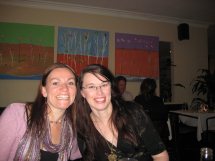 Posted by Michelle Roger at 15:03 9 comments: Links to this post

Just another quick post to let everyone know I'm out of hospital and back home.  Unfortunately, my plan to have a fully functioning gut and butthole was simply a flight of fancy and I am still sick as a dog.  (My plan to be ANTMs oldest, most wrinkled supermodel, is however going a treat, and I may be just a kilo or two off rocking skeletal chic).

It has really been quite an eventful time in my life, thanks to Bob's fickle nature. Highlights have included:


Ah dignity, I feel I may have misplaced you somewhere between the thumb-sized poo collection jar of stupidity and having to brace for a surprise enema.

"How many times can this woman talk about her busted gut and her need for special ed classes to learn how to poo?", I hear you ask.  Well many many times apparently.  Lucky you, dear reader.

Actually, what's even luckier is that my piss poor excuse for a body continues to fall apart at the seams so I am too exhausted to do much of a post (or breathe, or stand, or shower, or....), so you'll have to wait for the next episode in the exciting adventures of my bowel.

I will leave you with a fabulous post from one truly lovely Elly Lou of BugginWord fame who made my day by dedicating her weekly uke tune to me.  I may have alternately laughed hysterically and sobbed uncontrollably throughout, but mostly it just made me smile.  (PS I am also happy to take that bottle of wine, I'll even wait to share till after Paul's arrival, MFBT baby :))

A huge thank you to everyone who has commented, emailed, tweeted and FBed me over the past few weeks.  It means more than you could know, and has helped to keep me smiling through what I will have to admit has been and continues to be, a rather rough patch on many levels.

Michelle :)
Posted by Michelle Roger at 21:34 9 comments: Links to this post

The Machine That Goes Ping

Just a quicky to let you all know I've been admitted to hospital so probably wont be on here for a while.  I have attempted to do a delayed post, actually tried it before admission, so that may or may not come up.  Bob has kicked my butt big time.  At this point not sure when I'll have my freedom again.  At least I'm on day 3 of continuous fluids so I feel a little more alive.  Though having the machine that goes ping go off all through the night if I bend my arm is not conducive to rest.  Fingers crossed I'll be out in a few days, with some answers and solutions.

Till then, take it easy.
Michelle
Posted by Michelle Roger at 10:24 10 comments: Links to this post

The only way is up. 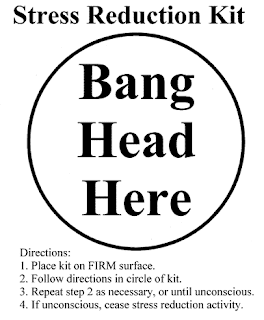 Well turns out my gastro was so atypical, it's not even gastro.  (Sigh).  Yep, once more even the vaguest trace of normal slips through my fingers.   It seems that Bob has dreams of world domination and my gut is Poland.  Joys.

Who knew there would be a time in my life where I would wish I had a bunch of rancid bugs having a rave in my lower imtestine?  Not me.  But there you go.  The fun times just never end.

It seems that uberneuro was right about the whole progressive thing.  Only by 'progressive' it appears he meant 'faster than a speeding bullet'.

So now I have more tablets to take.  More time to waste.  More checking in with my doctors to discuss my poo in great detail.  Daily conversations about the the consistency, shape and odour of my excretions.  Something to look forward to I'm sure.  I know they're just as excited as I am.  At least they get paid for the pleasure.

So my plan for now is watching re-runs of 30 Rock whilst sucking down Hydrolite popsicles, which taste suspiciously like Tang.  Luckily the new tabs also make you sleepy, BONUS!  Given the first one left me comatosed on the couch for a few hours, only to wake up to Mr G and the eldest rug rat eating dinner next to me, it looks like a snoozefest is on the cards for the next few days.

But really, if things don't pick up soon I may have to break out the big guns, otherwise known as, 80's Power Ballads.   So if you hear the first strains of I Want to Know What Love Is, or even worse, I've Never Been To Me, you'll know that the shit really has hit the fan.

Thanks to everyone for their well wishes, they are greatly appreciated.  I'm sending you all big cyber hugs and air kisses.

Update:  Always read the small print: "medication may lower blood pressure and cause rapid heart beat".  So shortly after taking its already: 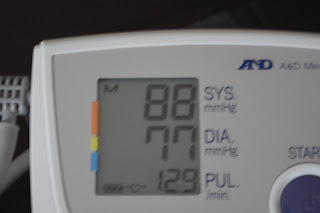 Okay I may just need one hit of 80s magic to make it through the day.

Posted by Michelle Roger at 09:01 4 comments: Links to this post

Now if only I could work out how to pick a better picture as the still.

Michelle :)
Posted by Michelle Roger at 17:05 4 comments: Links to this post