Today's guest post is something a little different as it is from the perspective of a carer, Damon. Damon and his wife Zen, who has been diagnosed with POTS and generalised Dysautonomia, hail from The Land of The Long White Cloud aka New Zealand. Damon talks about what it is like to be the one standing next to the person they love who is traversing the complexity of illness. I love his last point and his evident love for his wife. Thank you so much for sharing, Damon. 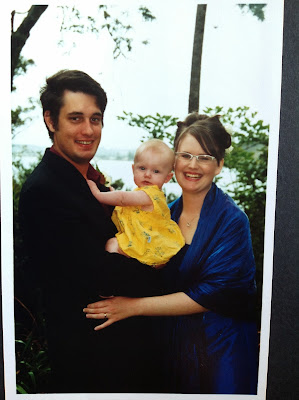 (Damon and Zen on their wedding day with their little one.)

About four years ago it was very frustrating because doctors kept saying my wife's illness wasn't physical. I knew it was, because my wife (Zen) wasn't mentally ill. Her mental acuity was certainly not impaired. She was getting more and more exhausted just from walking, and she'd always been a big walker before that. She was in physical pain after walking, too. 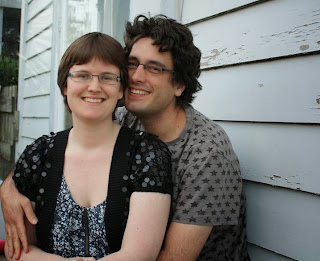 When the GP ordered blood tests, the results were screwy. They indicated thyroid problems, and her internal organs were struggling. The doctor settled on overactive thyroid. The thyroid went back to normal pretty fast, but Zen was sicker than ever. She was having horrible attacks where she went very pale and cold in her hands and feet, and shuddered a lot. She would writhe around quietly, and sometimes be gasping for breath. She would need to be cooled down with water and ice. I thought she was dying.

One day she took a strong tranquiliser because the doctor said she should see if it helped. She was on the couch totally out of it, but with all the same symptoms. Sweating, needing water tipped on her, having difficulty breathing. One day Zen was sitting talking to the doctor, and she had an attack. The doctor looked at her funny because she went all pale, and he told her to go over on the bed because he thought she was about to faint. Zen didn't want to go up on the bed because she said everything was spinning, so she sat on the floor and tipped water all over herself and ripped her top off because she felt so hot. At that point the GP seemed to realise something was very wrong. He sent my wife to a specialist who told her after the first appointment that she had POTS. I took her to the hospital for a tilt table test and they said it was the worst case of POTS they had seen. 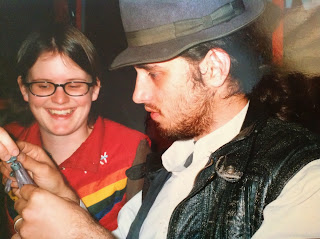 (Zen and Damon shortly after they started going out)

I started having to take a lot of time off work to take Zen to doctors, and to look after our daughter more. I had to do all the things we used to do as a family, just with our daughter instead. Zen was in and out of hospital a lot.

It's four years on now. Zen has been diagnosed with generalized dysautonomia possibly brought on by a virus, but she has had symptoms all her life. Zen hasn't really gotten any better. The medication just keeps her out of hospital a bit, but she can't do most of the things she used to do. Some doctors act like her illness is nothing. Other doctors say her illness is awful, and it's very unfortunate there is no cure for her. None of the doctors seem to want to help.

Zen is always trying to do stuff around the house and I have to tell her to stop it and sit down because she starts banging into things and dropping things. Even though her body has given up, she hasn't. Zen always gets more sick the more things she does. I can see that she gets very frustrated. When I first met Zen she always wanted to go out on adventures. She was never happy to just stay at home. She used to sing a lot, and play the saxophone. We even said in our wedding vows that we would never stop climbing trees and singing in the branches together. I watched Zen go skydiving and doing so many crazy, fun things like skinny dipping at the beach.

These are the main things that have changed for me since my wife was afflicted with this condition:

I lost all my old friends.

It's harder to keep up with work. I gave up on my career aspirations and have kept the same job that has the flexibility I need to look after my wife and daughter.

Almost every time my daughter and I go out, Zen isn't with us anymore. I spend the whole time worrying about Zen at home alone, and checking my cellphone.
I feel a dread when I leave the house.

I have given up on hobbies.

I don't get to go on dates with Zen anymore. We used to have a lot of fun in the city.

I am now my wife's main caregiver. Every morning I refill her drink bottle, cook food and/bring it to her, empty the bed pan, bring my wife medication, and basically do whatever she needs doing.
When I get home in the evening, I have to start washing the dishes, clean up the kitchen, and cook the dinner straight away. I am often tired. Sometimes Zen needs me to stay up very late because she feels too sick. 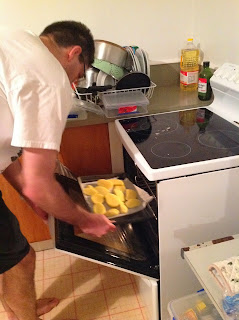 My wife and I have a good routine. After our daughter goes to bed, I make Zen's second dinner. She has to eat two dinners to keep her weight steady these days. We watch a show together. Then we listen to a comedy radio show and Zen usually falls asleep during it. I switch it off, empty the bed pan, turn off the lights and go to bed. We can't sleep in the same bed anymore because sometimes Zen got very weak muscles from me turning over in the bed, and it was horrible. A couple of years back, in the middle of the night I had to call the ambulance because she could hardly breathe when it happened. 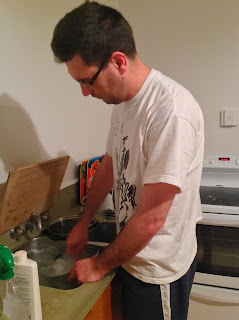 I have a closer relationship with my daughter because I do more things with her now than I would have otherwise.

We've caught up on a lot of TV shows that we didn't have time to watch before.

I have filled the master bedroom with my comics.

I decided to get Zen a cat because I know how therapeutic they are. We got the first one on my birthday last year. Since then I rescued another cat that was stuck in my car, and they are very entertaining. The cats love to sleep all over me.

Zen still manages to do things for the family. She sorts out the budget, pays all the bills, orders the groceries and organises the outings for me to take with our girl on the weekends.

What I would like people to know is that even if your partner becomes sick like this, their brain still works and it would be hurtful to them if you gave up when they don't have that option. It could have easily been you that got sick, and you would want your partner to stick by you. You can make a routine that works for your family. Collect small moments of happiness whenever you can. 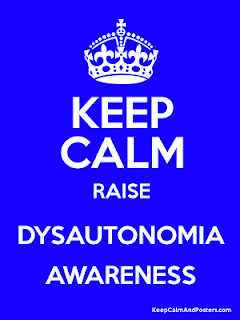 Don't forget to check out the other awesome guest posts:
1. Claire: The ups and downs on the journey to diagnosis.
2. Amity: Art from the heart.
3. Claire: Finding your personal treatment regime. A spoonful of this and a teaspoon of that.
4. Belinda: Coming out.