The Thumping Tube of Death

Well I did it..  I made it through and lived to tell the tale.  Victory is mine.  Maybe I can get a trashy t-shirt made to commemorate the occasion. 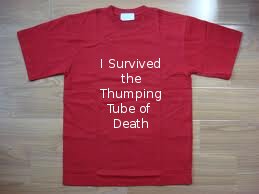 "Why don't we do a scan?"  Sounded like a good idea at the time.  Obviously I was away with pixies, as I appear to have agreed whilst completely forgetting my gut wrenching fear of small spaces.

Give me snakes.  Give me heights.  Give me ramshackle Vietnamese bridges where a landslide had taken out the road the day before.  I can deal with that.  However place me in a small space and I am totally convinced that I am suffocating and going to die.  Even back in my navy days, I was happy to fight oil fires, with thick black smoke blocking my visions and the flames rolling over the roof like a scene out of Backdraft.  That I can do.  But that damn face gear (shudder).  I have never tried so hard to find my happy place as when I had to put that large mask over my face.  I don't care that I was hooked up to an air tank and was therefore assured of continuous O2, I still felt like I was going to die.  Agreeing to a MRI therefore suggests I have more than one screw loose.

My last MRI adventure was unpleasant.  A head and spine combo.  50 minutes complete with head gear and chest plate.  My panic at the time did mean I was moved from the dark cave/coffin at the bottom of the hospital to the bright shiny room and Mr Grumpy was allowed to sit in and hold my foot.  I may or may not have nearly cried at the time when they said I couldn't be sedated, as that had been my grand plan to make it through.  I swore after I would never have another.  Yet there I was again, trying to swallow my fear (and vomit) yet again.

This time around it was 15 minutes (though it felt like 15 years), and just my neck.  Time to suss out those dodgy blood vessels of mine with an Magnetic Resonance Venogram (MRV).  I know that not much in the way of blood is going to the old noggin (about 50% according to the Prof a while back), which explains a lot.  This time it was to see if what little was getting up there was draining out properly.  I've known for quite a while now that my veins are dodgy.  My cardiologist delights in telling me how bad they are and showing others my gold medal winning blood pooling abilities.  I feel special, really I do.  Maybe I can get my photo on a Weeties box?  Now there's something to which I can aspire.

I had managed to live in denial about my upcoming suffocation for a number of weeks.  Then the night before I had the joy of filling out the bazillion questions on the form in between hyperventilating and throwing up a little bit in the back of my throat (anxiety rocks).  I will admit to a certain level of childish amusement when one of the questions asked if I had a "penile prosthetic".  Really?  I can understand the pacemaker question, and asking if I was a welder (only in my Flashdance dreams), but fake penis?  Not so much.  I have been told that my voice is rather deep for a woman, but it's not like I sound like James Earl Jones. All of a sudden I had Lou Reed's Take a Walk on the Wild Side playing in my head.  I will say that my fear did take a turn for the worst when I read the final lines on the back of the sheet.

What the hell radiology people?  Don't put a line like that on the sheet you send to claustrophobia girl.  Sheesh.  "Thank you" just doesn't cut it.

This time around I was accompanied on my journey by my bestie Kerri.  You know someone is a true friend when you hop in their car and say "sorry I'm having one of those pee every three minutes days we may have to stop frequently on the way" and she doesn't bat an eyelid.  Or when they see you freak out and not care.  Or pretend to be laughing at your ridiculously huge scrubs and not the small whimper of fear that may have escaped your lips.  A true friend makes you laugh to take your mind off things and even offers to sit in if you need.  I did suck it up enough to not beg her to sit in with me.  I was rather proud of myself.  A true friend also doesn't tell you that the machine you are about to go into is in a dark little room, is very tiny and lacking any mirrors to see the outside world.  If she had I may have run screaming from the waiting room.  A true friend doesn't tell you beforehand that she's so relaxed she falls asleep in MRIs.  Thanks Kerri for being that friend.

I will say that the staff were lovely.  I wanted to hate them for what they were putting me through, but it's hard when they come in and pat your hand and tell you that "you're doing so well", in a Romper Room voice.  I had the joy of trying to explain Bob in the pre-interview, it never grows old.

"Do you have high blood pressure?"

"Do you have low blood pressure?"

She was lovely though and didn't even bat an eyelid when I suggested she add a few plus signs next to the claustrophobia question.  Nor did she call me a freak for saying that I wanted her to come to all my blood draws as she was the first person in a very long time to find a vein first time round.  Or that I thought the IV should be pumping in tequila instead of a contrast dye.  She even joked as I was leaving that she'd be happy to come along the next time I needed a venous line.  To top it off she was happy to take photos for me and suggested a good place for a recovery coffee.

Swallowing down fear and vomit is hard work.  Standing in the door way and finding that the machine was an old super small MRI that made the last one look like an open field, I must admit to a moment of hysterical screaming panic in my mind.  I'm still amazed that I managed to put one foot in front of the other and not only get to the machine but also lay down on the skinny table that slides in the thumping tube of death, instead of simply curling up catatonic in a corner of the room.  I know it's a ridiculous fear, but that's what a phobia is all about. Looking back now I want to slap myself for my silliness but in the moment, ugh, it's overwhelming. 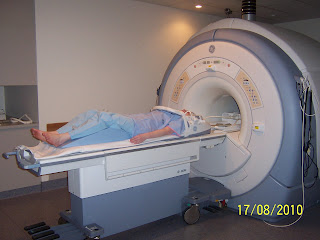 (I don't care what anyone says that is a stupidly small hole.
"Damn radiologist has strapped me down so I can't make a break for it. Stop being nice you cow I want to hate you right now. Don't pat my hand and tell me I am "doing so well", I hate you and your niceness, evil torture woman".) 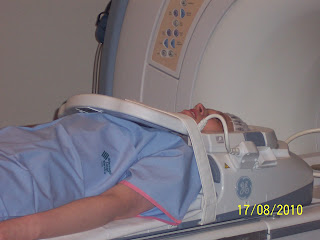 I know the radiologist was speaking to me before I went in but it just became white noise.  Thankfully there was no head gear this time round, but there was the chest and neck plate which was strapped down to the table so I couldn't make a run for it.  As they slid me in my internal conversation went something along the lines of:

"Your doing so well Michelle, this next section is 10 minutes".

Then all of a sudden the table was moving and I was out.  I had escaped the jaws of the thumping tube of death and lived to tell the tale.  I was going to say I made it out unscathed but my extra 1,000 grey hairs tell a different story.  Luckily here is Aus such scans are bulk billed, so essentially free.  I feel blessed, especially knowing what friends go through in other countries.  Also I have since found out we are one of the few countries that gives you a top and pants, instead of a hideous drafty hospital gown.  Go Australia.  The land of wide open spaces and free pants in MRIs.

Thankfully the brilliant Kerri and I went and had coffee and lunch after to de-stress, before she drove me home.  Strangely, it was a fun day in it's own weird way.  Laughing with a friend who knows only too well the joys of the medical drill.  Chatting, going out to lunch.  Laughing some more.  If I take out the pee my pants fear and near death experience of the thumping tube of death, it was a great day out. 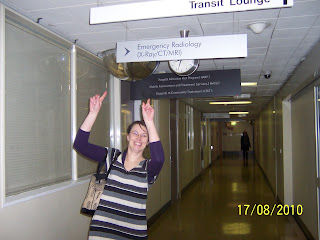 Now I play the waiting game.  I have a copy of the films to look at, but not the official letter.  If it was a brain MRI I could read it in my sleep, unfortunately a neck venogram not so much.   So I will spend the three week interval between scan and cardio appointment, trying not to think about it and failing miserably.  I can't help but go back and look at the scan every couple of days.  I look at it and think "that's some weird shit man", but as to whether it is in the realms of normal variation on not (and I know from experience normal can look decidedly abnormal at times), I have to wait, and waiting sucks.

In honour of my penile prosthetic query, Take A Walk on the Wild Side.