News Flash:  Michelle's body has another mutant part.
I know, I know.  It's not really a news flash.  I don't even know why I'm surprised.  Even an idiot could see it coming.  Well any idiot other than me, that is.  Now before any of you, my lovely readers, decides to jump to my defence with cries of, "But Michelle, you're a brilliant and gorgeous woman, with killer thighs" (which is quite sweet of you to say), even my cardio pointed out my ever increasing stupidity at our last appointment.  I'm even pretty sure I saw her doodling a bid dunce cap on my file as we spoke.  So really my misguided belief that I was due for a "normal" result is not that surprising.

September has been a time of enlightenment and discovery on the body front.  First my body added mutant boobs (boob saga available here and here) to my list.  For those of you who can't be bothered reading about my degenerate boobs (and frankly, why would you?), I have boob tissue growing where it should not grow.  This has given Mr Grumpy a new comedic outlet whereby he'll grab my knee or shoulder and start moaning "Ooooh.  Ahhhh.  Yeah baby.  Nice boobies".   He truly is a funny, funny man.  I guess they don't call them "fun bags" for nothing.  Now, I have another exciting bodily development.

As most of you will know I emerged the victor in my battle with the thumping tube of death a few weeks back.  I really should congratulate my opponent.  He never wavered for a minute of our 15 minute death match (think Thunderdome without the metal).  Despite his valient efforts to suffocate and crush me in his belly of doom, I emerged, battered and bruised, but still breathing.  At the time I had no answers.  Just a copy of the films to drive me slowly insane in the intervening weeks between scan and cardio appointment.

It turns out that my diagnosis of "that's some weird shit man", was actually correct.  I really do have some "weird shit" going on.  My left jugular is a mutant; twisted, with multiple stenoses and weird engorged bits hanging off the side going nowhere.  My right is "relatively better".  Which is a bit like saying losing a finger  is "relatively better" than losing a thumb; not all that encouraging and definitely not a reason for celebration.  I mean, I loved The Fly, but no one really wants a mutant Jeff Goldblum living in their neck.  I have however, decided that my left jugular shall forever be known as "Jeff".

(Actually, a naked, pre-splicing with a fly, Jeff Goldblum, is rather disturbing too, The Fly 1986) 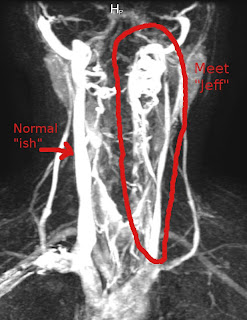 (Meet "Jeff")
So what does all this mean?  In simplest terms, the drainage system from my brain is blocked and I need Roto-Rooter to come and sort it out.  Maybe I can get the Roto- Rooter guys from Ghost Hunters to deal with it, that would be rather cool.  Brain drainage and any errant poltergeists, dealt with in one quick visit.  In all seriousness, having my brain sit in a cesspool of manky used blood surely can't be a good thing.  It makes me wonder how much it's contributing to my Bob symptoms.

The only feasible way to try and sort this out is to have a long wire shoved up my leg and threaded up to Jeff and then have a balloon angioplasty to try and open him up again.  I wonder if you can request balloon animals?  I like the idea of Jeff being opened up by a balloon in the shape of a sausage dog, or maybe a giraffe. Here's hoping the doc's at least as talented as those guys who make the balloon animals at kids parties.

The strangest part about all this, is that for years I've had knife-like pains in the left side of my neck (and to a much lesser extent my right), that involved my jaw and ear.  I never really thought much of it, as it was just another pain in the big scheme of things.  Now I find out that this pain is connected with jugular stenosis.  My migraines are also primarily on the left and for many years I have had unexplained piercing ear pain on that side.  So I'm hoping that all of that may resolve, or at least improve, when I get the balloon animal of my choice, in my neck.

I should probably take a step back to explain why I even made the masochistic choice to jump in a dreaded MRI and look at this in the first place.  It all began in my doctors office many moons ago.

At my last appointment my cardio told me in no uncertain terms that there was nothing more she could offer me to combat Bob.  She also added that if I had any ideas, she would be happy to support me.  Luckily she has proven true to her word and given my non-existent choices and progression, is happy to think outside of the box.  So up popped the completely out of left field idea of Chronic Cerebrospinal Venous Insufficiency, or CCSVI.  "What is CCSVI?" I hear you ask. In simplest terms it's where the venous drainage system from the brain and spine are impaired.  This can lead to a number of symptoms, including fatigue, brain fog and heat intolerance (can you guess why I was interested?).

Currently this is being investigated primarily in MS patients, although more recent studies have shown it to be present in a number of other neurological conditions eg, MND and Parkinson's, and it is being posited as one of the possible causes for indefinable symptoms such as fatigue.  Although, it's still in it's infancy (I could go into the current debate, but the links below explain it much better), there is now enough evidence, that investigation and treatment is now being offered in a number of countries, including Australia.

The clincher for me was when my best friend, who has MS, had the investigations and was found to have stenosis in both jugulars.  Following treatment she had a significant improvement in a number of her symptoms (including fatigue and brain fog) and was visibly 'well' for want of a better term.

Since then there have been a steadily increasing number of clinical reports and personal accounts of improvements following treatment for CCSVI.  Notably, the interventional radiologist (who is the Director of Radiology at one of Australia's top hospitals, so has some serious credibility) who will be doing my procedure reports that even those patients with no other significant illness who have jugular stenoses repaired, have significant improvements in attention and concentration and fatigue levels.  I'd be pretty happy with that at this point.


Whilst my dance with the thumping tube of death was unpleasant to say the least, it has at least provided me with some useful information and potentially a chance to alleviate some of my symptoms.  My cardio is also sending me off for a doppler ultrasound of my legs to see if I have similar mutant vessels that may explain why my pooling is so severe.  Who knows, for the first time in nearly five years I may actually be able to have some relief from the day to day drudgery of Bob.

I'm not getting my hopes up yet.  To many times I have been told that a pill or procedure would help, only to be sorely disappointed.  So I'll go in with an open mind and just see what happens.  The scientist in me knows that without objective data it would be easy to say any improvements are due to a placebo effect, so I am going to contact my physio to do some basic tests pre and post angioplasty.  In many ways it's more for me than anyone else.   I want to know that any improvement I am experiencing is 'real' and not just in my deluded head.

I will admit to a few butterflies about the whole process.  Fiddling with the main drains from my brain was not something I had on my Bucket List.   But I figure if I have even a 10% improvement in my fatigue or brain fog, that's worth it at this point.  Besides if I can conquer the thumping tube of death, a balloon in a mutant vein will be a stroll in the park.

Really there is no appropriate musical accompaniment to having a mutant Jeff Goldblum in your neck.   Although I was tempted to add Falling to Pieces, by Faith No More (so apt in so many ways), I decided to go with Remedy, by The Black Crows as that is what I need most at the moment.