Sick? You're doing it wrong.

If one more person tells me how to be sick, or, more specifically, how I'm doing it wrong, I may just....Well, I really don't know what I'll do as I have all the get up and go of a soggy tissue. But I'll think up some really snappy Looney Tunes-type scenarios, complete with over-sized anvils from the Acme company, that I'll replay over and over in my head. 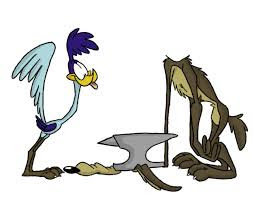 Why do you care how I deal with my illness?

Why do you think you are more of an expert about my experience than me?

Why do you instantly think I am doing it wrong?

There are the "if only" brigade. If only: I ate better, prayed more, exercised every day, went to their homeopath, checked out my chakras, saw another doctor, stopped seeing so many doctors, took this medication etc.

There are also the outright rude brigade. I have been called a "fool" or an "idiot" on more than one occasion.

There are the amateur psychologists . You're depressed, you're anxious, you want to be sick, if you were more positive you'd be well etc. All decided after a two minute chat.

The "my second-cousin twice-removed's next-door neighbour's uncle's dog-sitter's dental-hygienist, had what you had and they're better now" brigade.

The list goes on. But all drive me barmy.


I've had a clanger running around my head for a while now:

"Are you depressed? Don't become one of those depressed, chronically ill people."

One of those people.

God forbid I should feel a wee bit down about my situation. You know the whole life-changing illness malarkey. Daily pain. Daily vomiting. Daily lack of functioning. How dare I? Damn you, Michelle. Pick yourself up woman. Don't go down that road. Next thing you know you'll be hanging out with politicians, and people who kick kittens. You know, those people.

Because feeling down, or dealing with Depression, when you are chronically ill is apparently wrong.

I have been stewing over this comment for a few months now. At the time I mumbled my way through an incoherent set of words that could have been essentially summed up as a simple, "No". After the fact, I beat myself up for all the things I wish I'd said, instead of being foiled by a combination of shock and brain fog. And then I got angry. I may have ranted at the long-suffering Mr Grumpy for a while and let off a few exasperated, FFSs. But I always wish I had the guts to ring back and say my piece. Instead, I took the less confrontational road of spending my nights ruminating on all I wish I'd said.

I've been trying to think why it affected me so deeply. I think I have finally boiled it down to 4 main points.

1. As Mr Grumpy pointed out at the time, I have more than enough reasons to be depressed. The last seven years have sucked. I have had seven years of pain, loss and increasing disability. I have pretty much earned the right to be sad, or angry, or a generally pissy person if I wanted to be. I am not, and have never been, the kind of person who cries into their cornflakes over piddly things, eg because they don't have the latest iPhone.

2. Depression isn't a weakness, or a failing of character. It isn't a choice. It is an illness and it effects millions in society. Depression is incredibly common in chronic illness communities, with an estimated "28% of people with a chronic physical condition also [having] a mental disorder". Even irrespective of developing a chronic illness, it is estimated that 1 in 5 women,, and 1 in 8 men will experience depression during their life. So is it really that unrealistic to expect that a person with a chronic illness may also be dealing with depression? If, for example, a person with Dysatuonomia also had diabetes would we go around saying, "don't become one of those diabetic chronically ill people"? Perhaps instead of criticism, there could be support? Or maybe a simple, "how can I help?" Such a negative attitude is a sure fire way to get a person to hide what they are thinking and feeling, for fear of judgement.

3. So called 'negative' emotions like sadness or grief aren't inherently bad. They are a normal reaction to what is often an abnormal or stressful situation. We have a range of emotions for a reason and some are more appropriate to certain situations than others. Being permanently perky can be just as unhealthy as permanently pessimistic. For example, laughing with happiness at a sombre funeral, not exactly appropriate. Laughing with happiness at a comedy club, pretty appropriate. If I were to stuff down my sadness every time it reared it's head, how would I ever process it and move on? Saying I'm over being sick, does not instantly make me depressed. Should I say I am absolutely stoked to be sick? Don't shut me down, with a flippant comment about not becoming one of those people.

4. I have worked damn hard to not be depressed. I had counselling for a year when I first left work and I felt like my life was crumbling. I took the steps I needed at that time. I now manage my stress and my general mental health, as I once managed my career. I am an inherently positive person, but I also work every day to find the joy in life and to keep myself moving forward. And I work double-time when this illness throws another curve ball my way. I have bad days but they are far outweighed by the good. To have all my hard work dismissed without even taking the time to find out how I am coping, is just rude. How about a high five for how well I am managing, despite a bucket load of obstacles?


I am always astonished when someone enters my life for 5 minutes and they not only have to  judge how I am managing, but tell me after that same 5 minutes, all the ways I am doing it wrong.

I have lived with serious chronic illness 24 hours a day, 7 days a week, for 7 years. I'm still laughing and putting one foot in front of the other. That simple fact says I must be doing something right. Please respect that.

As they say, that just makes an Ass out of U, but in this case, not so much, out of and Me.