Develop all the symptoms! 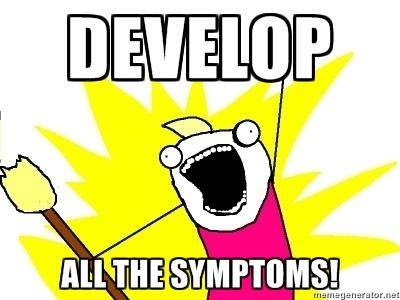 I saw the above picture over on Carrie, from Just Mildly Medicated's, Facebook page today and thought it couldn't be more perfect for my current situation. If you follow me over on Facebook you know that despite Jeri's (my pacemaker) best efforts I've still had a dive in my symptoms. This is not to say that Jeri isn't doing her job. She's been a trooper, and I haven't had a collapse since she went in. Funny how a regular heart beat helps. But alas even Jeri is just not equipped to fully deal with my body.

I've had a step-wise progression. Ie I deteriorate for a while, then that stops, I become kind of stable for a while, and then I start to deteriorate again, until the next plateau, and on it goes, ad infinitum. It's been my regular pattern the past 7 years. But something definitely changed back in May. Not only did my heart decide to become a couch potato, but a host of other symptoms popped up, some new and some with an increase in frequency. As I said, "I think I may be in the "fall screaming" stage before I hit the next step plateau."

Luckily, I also had a neurology appointment coming up. Instead of my normal 'Take in my 3 Top problems', philosophy for medical appointments, I ended up with 7. Then as my appointment progressed and she started asking the right questions (because she's an ace neurologist) and Eunice (my last remaining, and thoroughly over taxed, brain cell) finally looked up from her latest edition of Woman's Day, more problems came to mind.

Thankfully, instead of relying on my inadequate descriptive skills I also came armed with a host of photos and videos to show what my body does in these bad patches. Even more thankfully, my lovely neurologist was stoked that I had a multimedia display worked out for her, on top of my nicely set out, dot point, list in my notebook. (We may just share a love of organisation and structure.)

Thankfully again, or not depending on how I am reacting to the news in a particular hour of the day, she actually had an pretty clear idea as to why I can't walk periodically, and why the left side of my face (not unlike my boobs and sad derrière) heads south, and why my breathing gets difficult periodically, and why my meds are getting stuck in my throat, and why I can no longer squish a lemon, even with 2 hands, and.....

You see not only do I have, as she put it on my referral for a biopsy of one of my facial nerves (that's right, they are going to cut another fricken nerve out of my body), "a very rare autonomic disorder" (so rare it doesn't even rate it's own name, though I did suggest FUBAR to her again. I do hope it takes off.) I have also developed another rare, this time neuromuscular, disorder. Because one just wasn't enough. No way, no how, baby. I'm gunna get me all the symptoms! Oh, and did I mention they are going to CUT INTO MY FACE.

The culprit this time being Myaesthenia Gravis, or grave muscle weakness, for the less Latin-minded. Well at least that's the odds on favourite. The Black Caviar of all the potential neuromuscular junction disorders. I'll let the interested read up on it in their own time, as really I can't be arsed facing it enough to write about it in detail at the moment.

So now I am waiting on the confirmation from antibody testing and await the joy that will be the facial nerve biopsy. Admittedly there are a range of treatments, none of which are pleasant, (Mestinon and I did not part of good terms after our short-lived daliance) but it is manageable. YAY another no cure, progressive diagnosis. Just what every girl wants to hear.

And all my autonomic symptoms, small fibre, and now large fibre neuropathies are spreading/multiplying like randy little rabbits all over this sack of meat I call, my body (or Arsewipe, depending on the level of maturity of my coping skills at the time).

Oh and did I mention they are going to CUT INTO MY FACE!

But I did get to up my pain meds. And my neurologist said I looked pretty, and she liked my skirt. And now every time Mr Grumpy moans about something I simply yell "WELL AT LEAST THEY'RE NOT CUTTING A NERVE OUT OF YOUR FACE", which frankly is the best come back EVER. So you know it wasn't all bad.

PS Go on over and visit Carrie over on Just Mildly Medicated, love her. She's a woman after my own heart. Taking the piss out of illness. Cracking sense of humour. And she understands and shares my love of both Game of Thrones and The Walking Dead. Oh, and she has a cape!