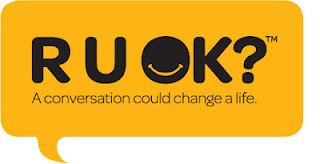 RUOK? day is coming up on the 13th September here in Australia and it's time to get involved. This brilliant initiative began in 2009 and has grown every year since. As the site explains:

"R U OK?Day is a national day of action dedicated to inspiring all Australians to ask family, friends and colleagues, ‘Are you ok?’ By regularly reaching out to one another and having open and honest conversations, we can all help build a more connected community and reduce our country’s high suicide rate."

"Connection and open, honest conversations are good for our wellbeing – whether or not we’re struggling with a problem. It helps us to feel valued and supported by the people around us. There's also an emerging body of research which links supportive social relationships and a sense of social connection with protective factors in suicide prevention."

As I wrote recently (here) the incidence of mental health issues such as depression or anxiety, are very high amongst those who live with chronic illness. As a group those with chronic illness are faced with illnesses and disability that are measured in years or, in some cases, life times. The physical toll is often high, but it is the mental and emotional toll, which often goes unknown by all but the sufferer, which frequently creates the greatest burden. It is important that we start the conversation about the mental health burden of chronic illness, particularly when unlike many of the chronic physical conditions, it can be addressed successfully with appropriate support.

The issue is complex. Stress is often multi-factoral and many are reluctant to discuss their difficulties for fear of being perceived as weak or the stigma associated with mental health issues. Dysautonomia is an umbrella term for a complex series of disorders that arise from the malfunction of the autonomic nervous system. Some forms are rare, but even amongst the more common forms, they are rarely discussed and not easily identified. Patients often experience long and stressful journeys to diagnosis. Even once diagnosed, the complexities of the disorders and lack of information and treatment pathways lead to ongoing high levels of stress. Add to that the severity of sometimes disabling long term symptoms experienced by many and it is not surprising to find that if actually asked, many patients will respond that they may be functioning but they are not necessarily OK.

Those with chronic illnesses that are rare or poorly understood such as the Dysautonomias, often face a long and soul crushing journey to diagnosis. With symptoms that are frequently vague or fluctuating, patients are told "it's all in your head", "you just need to get out more", "you're depressed". Many are faced with insinuation or outright accusations of malingering or lying. The story is repeated again and again on forums around the world. Even long after diagnosis these words continue to haunt patients who continue to hide their stress levels for fear of reignitig old accusations.

Being a chronic illness many find that their friendships and social relationships fall away over time. Friends who initially came around with a casserole or offered to take a child to school, call around with ever decreasing frequency or, simply disappear. Social isolation is a huge issues for many. Especially those patients in isolated or rural areas, or those in countries where little is known of the disorder. Even in larger cities and centres where there are more patients, it can be difficult to organise face-to-face meet ups with patients who are fatigued, have mobility issues and, thanks to the quirks of the disorder, may have to cancel engagements at the last minute. Whilst fellow patients may understand this, often friends and family do not and social invitations slowly evaporate. In my own case, many friends I thought would always stay by my side disappeared as my ill health increased. My circle of friends decreased over time until now I can count them on one hand. Although I would say chronic illness does aid in rapidly sorting the wheat from the chafe and whilst I may not have the same quantity of friendships the quality is far better. (online friendships have been a saviour, but that is another post).

Intimate relationships change. Husband and wife, becomes carer and patient. Trying to maintain a marriage in these circumstances can be very difficult without dedication. Often outside guidance and counselling is required to traverse the new and changing relationships. Marriage breakdown is common and even dating is often difficult. The strain of constant illness, inability or infrequency of intimacy, financial concerns, difficulty in maintaining roles such as house keeper, parent or cook can all mount to create problems in relationships. Additional difficulties can arise when a partner requires aid with personal care needs such as showering and toileting. Where does the role of husband stop and carer begin? Navigating these changes can be very difficult for couples many of who attempt to do this in private for fear of embarrassment or feeling like a failure.

Parent/child relationships also change. Adult children may be forced to move in with aging parents. Conversely, young children can become carers for their adult parents. Parenting with chronic illness is difficult. Being able to care for small children when you can barely stand or are worried about passing out can be both heartbreaking and dangerous. Guilt is common. Even when the children enter the teenage years they may be forced to care for sick parents or are unable to socialise with friends and relationships can become strained.

Many teenagers with Dysautonomia are unable to go to school or participate in regular teenage pursuits such as parties or sports. They are reliant upon parents at a time when they are normally asserting their independence. Again conflict can arise and strain exists for both patient and carer.

Work commitments are often challenged and unemployment is not uncommon for many patients. This creates not only a financial burden to families, but also a loss of identity. The first question asked at social functions is often "what do you do?" For someone recently unemployed this can be difficult to deal with and often those asking the questions are stumped as to what to ask next. For many, a career equals identity. We understand when someone says they are a doctor or teacher. There is a whole social schema that goes with each label. For many, myself included work was a joy. After years of study and working hard I had a job that I enjoyed and felt was making a difference in the lives of others. To give that up after a year of battling increasing Dysautonomia symptoms felt like the ultimate surrender. I felt like a failure. Added to that was the guilt of the financial burden I was placing upon my husband which was and continues to be high.

Independence is often the first casualty of chronic illness. Simply being able to do the grocery shopping by yourself can be difficult. Many patients who experience frequent syncope are no longer allowed to drive which leaves them reliant on others for transportation. Being able to garden or go to the movies can be a Herculean task. A patients' identity can often seem lost with each small piece of independence that disappears. Spontaneity is no longer possible. A friend calling over for a quick, unexpected coffee can be overwhelming. Patients need to prepare for outings and entertaining through rest, medications, extra fluids and salt, after which they still may be unable to participate thanks to the unpredictable nature of the disorder. It is the normal social situations that others take for granted, particularly the small things such as going to a cafe, that are frequently reported as most missed by patients. And the inability to do such simple things often serves to highlight what they have lost.

Cognitive problems are also common in Dysautonomia thanks to poor cerebral perfusion, fatigue and medication issues. Patients are embarrassed by lapses in memory, inability to complete simple tasks, read a book or follow a conversation. For many, on a bad day, speech is impaired both cognitively and mechanically. Many withdraw from social interaction as they are either self-conscious or simply unable to take in all the competing information.

All of these issues are on top of the physical symptoms of the disorder with which patients contend with 24/7 (tachycardia, bradycardia, hypertension, hypotension, syncope, pre-syncope, weakness, fatigue, poor thermoregulatory control, gastrointestinal symptoms, urinary frequency, seizures, to name but a few). Whilst the physiological symptoms of Dysautonomia can be difficult to live with, it is the impact that they have on daily life, the social, psychological and emotional issues that many patients find the most challenging.

The support for those suffering chronic illness is greatly lacking. Care fatigue ensues amongst friends and family as time passes and a patient either doesn't get better or, gets worse. Chronic illness doesn't fit into the normal sick paradigm associated with acute illness. There is no easily identifiable illness or injury, no clear and distinct treatment path and frequently no identifiable resolution after which the patient can resume their regular role in society. This leaves chronic illness patients vulnerable both medically and more importantly psychologically.

People stop asking if you're okay. As one of my readers wrote, "when I asked her why she didn't call to ask how I was, she responded "it's just your normal. I thought you were used to it"". Chronic illness patients are frequently forgotten until a crisis occurs. We develop means of coping, putting one foot in front of another, because there is no choice. There is no resolution as the disorder is chronic, you must learn a way to cope. Patients may smile and laugh , because they have learnt to find humour in the small things, but that doesn't mean everything is okay. It doesn't mean they are okay. It doesn't mean they are coping. Many are barely holding it together. Being strong for years on end is difficult. Sometimes we all need to be asked "R U OK?"

Please take the time to ask the people in your lives R U OK? If you have someone in your life living with a chronic disabling illness like Dysautonomia take the time to truly ask "R U OK?" It wont take long and they will appreciate that you care. You don't have to solve their problems, just listen and be there. Start the conversation.

If you are unsure how to ask someone, R U OK? Day has some fantastic resources available.

Importantly, if you're the one who isn't OK, but you're not sure how to tell someone or ask for help, they have information and resources here.

You don't have to be in Australia to participate. Nor do you have to stick to one day a year. You can ask "R U OK?" anywhere, and any time. Start the conversation and change a life.