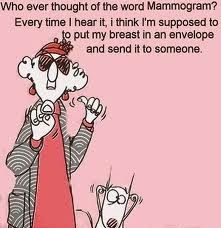 My boobs have been problematic from the start. They didn't even want to make an appearance for a long time, thus leaving me open to many terms of endearment such as Surfboard, during my teenage years. Not to mention that the top of my sternum and adjacent ribs like to stick out rather than curve in and I was cursing my genetic shortfalls even back then. By Year 12 they had made a half-hearted appearance and thanks to the wonders of the miracle bra I could pretend that my singlet worthy breasts actually had cleavage. I should have known from their early behaviour that they were going to be recalcitrant for years to come.

They hurt. ALL. THE. DAMN. TIME. How two somethings so tiny, could be the source of so much pain, I will never know. But when the blast of the shower hit them or the dog accidentally whacked them it was beyond painful. Nothing soothed them. Not changing my diet or scoffing Evening Primrose oil. To this day they are tender little things. Add in the sharp electrical shocks that now inhabit them, and they are a tiny barrel of laughs.

Pregnancy brought mastitis, prior to giving giving birth. Who knew that was even possible? And I lost all the skin off my left breast and had months of biopsies and painful dressings until a plane trip to Melbourne finally diagnosed an obscure dermatological issue. (It would seem that my body has always been intent on being obscure in every possible way. Thanks genetic lottery. I am reduced to using floaties/water wings in the shallow end of the gene pool.)

My boobs have been continually problematic from their lacklustre late appearance, onwards.

Shortly before I turned 30 I discovered a lump.  A trip to the breast clinic at the local hospital went from it's probably nothing, to scans, to instant review, to on the spot biopsy. Luckily, apart from a bazillion grey hairs and a good cry in my car afterwards, I got the all clear a week later. But this marked the beginning of my complex, fertile boobs, upping the ante.

Since that time I've had two "we aren't sure" lumps cut out and many more biopsied. I have been told that my breasts are a garden and Swiss cheese. I have breast tissue growing where it should not grow and incredibly dense fibrocystic tissue throughout. They are more bag of demented marbles than breasts at this point, and this means I am left with a constant quandary. If I feel a new lump should I be worried?

Since that initial concerning lump of nothingness, I have been a regular scanner. My boobs have been felt up and seen by more people than I care to recall. I did have a break at one point. There is only so much cold KY and small talk in a darkened room, whilst a stranger tries to find your backbone through your miniscule boob, that a girl can take. But the last couple of years I sucked up my pride, had a good talking to from my doctor, stopped ignoring my defunct boobage and re-entered the world of scans, mostly due to more and more lumps arriving.

Last year a week after turning 40 I found a new and unusual lump. And so I had my first mammogram, plus bilateral ultrasound, apparently with my boobs of high complexity I have to have both. Luckily that was just a large unusually shaped fibroadenoma, but it reminded me that I can't always tell by feel what is and isn't a worry.

Today I had my first mammogram in my wheelchair.

Now getting your boobs squished is not the most fun in the world. It's uncomfortable. It's awkward. When someone is trying to simultaneously fluff up and squish/stretch out your miniature mammary to try and get something to scan, it can be offputting. This is where the staff can make or break the experience. As women we have to be aware of breast health. We can't avoid it. And our minds often make the idea of a mammogram seem far worse than it is. I know the first one I took my best friend along for moral support, but this time I was far more blaze about it all.

The reality is it is quick. And chatty friendly staff make it go smoothly. Today in my chair it was more awkward, well more so for the poor technician than me. But she made me feel comfortable and at ease. It was as simple as whipping back the arms of my chair, bringing the machine down to my level and having to stretch out awkwardly in what, minus the large medical scanning device clamping down on my breast, would have been a Vogue worthy model pose.

Of course I had to wait to see if I needed more than the basic four scans thanks to my complex boobs. Though I kind of like to think of them as more enigma than complex. Like some mysterious femme fatale in a French Film Noir production. Makes it a wee bit more bearable. Really it's hard to be worried when you're thinking of your breasts talking in a deep French accent. When you have scar tissue from past surgery and dense tissue it's never straight forward. but thankfully by the time I had also moved onto the, "there's another cyst, and another, and another, and that ones awkward, and there's that fibroadenoma you mentioned and...." ultrasound, I was free to leave no more squishing required. Winning!

Whilst I was waiting in the mammography room while the scans were checked, I was amazed at how little this mammogram phased me. It really is innocuous, especially in light of the myriad of other tests I've had done, or the surprise pelvic ultrasound I had earlier in the year (Dear Doctors, tell your patient when you've added that to the list of scans needed. It's not a test you should spring on anyone). I know a lot of women put off having a mammogram, for fear of pain in particular. But it is both quick and although uncomfortable, should not be painful. The staff do this all day everyday and you are treated with dignity and there is no embarrassment. And as I found out today they are happy to work around issues like wheelchairs, and teeny tiny boobs.


So now it's waiting to see my GP for the results.

It is easy to get caught up in a world of Dysautonomia or other chronic illness, but we also have to take care of our more general health issues, just like any other women. And as my own experience demonstrates, being young doesn't mean you can't have breast issues. So check your breasts ladies and schedule in your mammograms and ultrasounds.

Interesting sidenote: I saw graph recently that showed fibrocystic breasts were over represented in Dysautonomia patients. As was endometriosis (which I also had) and PCOS. If I can find the link again I'll post it.

I really wanted to put Diana Ross' Touch me in the Morning as my musical accompaniment, especially given I had a morning appointment, but really the trick with these things is just to keep breathing, plus I love Garbage.