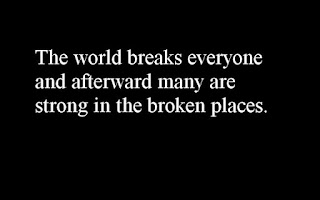 I know many come here for a moments laughter and respite from the absurdity of life with chronic illness, so I feel like I should add a disclaimer from the start. This isn't one of those posts. I am not shy in discussing the less glamorous sides of the physical aspects of illness so it would be disingenuous of me to shy away from the emotional detritus that also occurs.

I have been much worse this year than others. Though in truth it is longer than that, with the last 4months just a continuation on the previous year's exacerbation. Attempts to fight through it have mostly ended up in simply causing more problems. My presentation remains problematic and more disheartening diagnoses are being raised. Reports come back with words like "marked decline" repeated over and over and I have to admit it's been a struggle to try and keep a stiff upper lip. I am referred to more specialists in the hope that someone, somewhere, will have an epiphany. Not an epiphany about treatments or cures. Just that I may eventually be able to give a clear name to what is causing my body to slowly destroy itself.

I have clarity in some aspects but in many others I am still living in the shadowlands. And this is a difficult land to negotiate. Mostly I can compartmentalise. I focus on the small day-to-day needs and don't plan past the moment. I amuse myself with small things and generally don't register that my life fails to be even remotely similar to that of others my own age. It is certainly a better mode of existing than constantly worrying about the future. But sometimes moments arise and the calm I have so laboured to construct is shoved aside, as if it never existed.

Sunday night brought things to a head once more. After a day of crushing chest pain, worse than I have had in a very long time, and severe tremors, my body went into meltdown. For the first time in a very long time I passed out not once but twice, whilst sitting on the couch. Not even standing. Not even after an arduous day, or sitting in a hot room. No discernible precursor, apart from some gardening the day before. And it was quick. None of the usual lead up that gives me time to sit or lie down and avert full collapse.

There was the shift, as if the world hiccups, that heralds such moments. And then the waves of heat, the nausea, the weakness, the roaring wind in my ears and darkening of vision. There were dinner plates thrown at Mr Grumpy. Pillows shoved to the floor and a frantic attempt to get flat. And then the tears. Those damned tears. Sudden drops in blood pressure can cause tears, but there is also the frustration. The complete lack of control and the instantaneous knowledge that my normal abnormal is likely gone once more.

Add to that the fear it generates in those around me. My children have born witness to my illness from the beginning. I like to delude myself that they are coping well with seeing me like this. That they have found a sense of peace with it all. Anything can become normal if you live with it long enough. But in that moment when I was lying with my feet up the back of the couch, trying to hide the tears streaming down my face under an icepack, I realised how tenuous their comfort was. The fear on their faces and the tremble in the voice, bellies their stoicism. To witness it once was confronting. To see it repeated within the half hour was not what they needed. The reality of my illness was stripped bare before them and there was nothing I could do. To have them both come into my room the next morning to check on me. To tell me it was okay if I couldn't drive them to school. That they were concerned about me passing out at the wheel on the way home. It hits you hard. Such burdens should not be placed on such young shoulders. And the guilt that engenders breaks my heart.

To see Mr Grumpy shaken is perhaps most distressing. He is the strong one. The one who gives me strength when my own is failing. He is generally unphased by my state. But in that moment I realised how much I rely on him and how much he carries with little in the way of complaint. There was realisation that my illness affects him much more than I had ever imagined. And I want to tell him I'm sorry for giving him this burden, even though it was never my choice.

For the first time in a long time I cried myself to sleep. The pain, the fear, the physical and emotional wretchedness that are created in these moments given free reign. I let the little voices that come out in the dark, speak their venom. I hate it, but it is part and parcel of this life of mine. To pretend these moments don't exist is to deny the realities of what it means to be ill.

As I finish typing I wonder whether 'Portents' would be a better title. As much as I try to remain positive I have to wonder if this is just another sign of things to come. It is hard to not get disheartened when improvements are only measured by the a slight decrease in symptoms after yet another spike. When the only symptom that has been well controlled has risen not once but three times in less than a month. That the permanent pain in my left leg has now spread to my left arm. Such that both now feel like someone has taken a crow bar to the bone. And yet conversely, I burn my wrist on steam and don't feel it, and can poke the large black bruise on my arm with impunity as the dead nerves no longer register the sensation.

Where for the first time in a long time I feel like I did right at the beginning, before a diagnosis and before medications. It's a scary place to be and not one I truly want to face, but in reality must. If I hide what I am feeling not just from the outside world, but from myself, it will devour me. If I tell others that to admit the negative aspects of this illness is both courageous and freeing, how can I not do it myself?

There is catharsis in truth, no matter how ugly and scary it may be.

For those who don't know I am in the running for the 2012 Best Australian Blogs Competition. If you'd like to vote for me (though after the depressing purge above I understand if you don't) click on the icon below. There are many other fantastic Australian blogs in the running so you can always send a vote their way.