Well it's that time of the week again when I break out my rose coloured glasses, staple that slightly deranged and ecstatic smile on my face, and leave the realms of reality to live in a land of puppies, lollipops, fairy dust and moonbeams.

I must admit its a tad more difficult today as I am currently battling a very virulent form of pestilence brought home by the Ebola ridden, youngest monkey boy. And when you are already scrapping the bottom of the health barrel it's not pretty site.

I apologise to all the trees that have been felled so I can have something to catch the litres of fluids making an break for it via my tender nostrils.  Normally I am  recycled paper girl, but not today.  My Rudolf the Red Nosed Reindeer impersonation requires silk touch, aloe vera soaked, triple ply, bleached and pulverised old growth rainforest tissues.  Tomorrow I'll get back on my Green soap box, but not today.  Besides I figure it's all balanced out by my use of happy eggs, dolphin friendly cleaning products, recycled loo paper and the water saving philosophy of "if it's brown flush it down.  If it's yellow let it mellow".

Old Eunice is valiantly battling through the truckloads of mucus that have chosen to reside in my noggin, to try and get me through this, so be prepared to be wowed by my mediocre efforts.  Tip for the day: if you close one eye and screw up your face, it takes the edge off the jack hammer pounding away in your head when you are looking at a computer screen.  Alternately it could be the litre of cough mixture and Nurofen I had for breakfast, who knows.  So just bear with me whilst I chant my perky mantra to try and brainwash myself into pathological optimism:

Okay.  My glass is once more half-full, maybe half-full of mucus of varying densities, but half-full none the less.

All right now before I OD on Lemsip and Vicks Vapour Rub fumes, I thought today I'd write a post to celebrate the nerds and geeks of this world.  I have been inspired by a recent news story here in Australia and I think that it behoves me as a proud Aussie to share it with the world.

Now prior to the story I should acknowledge the controversy surrounding the terms 'nerd' and 'geek'.  I often use these interchangeably but apparently this is a huge faux pas.  So to save you this embarrassment I give you this link to explain these different groups (to lazy to do it myself today).  And what would a discussion of geeks and nerds be without a Venn diagram to help explain this contentious issue. 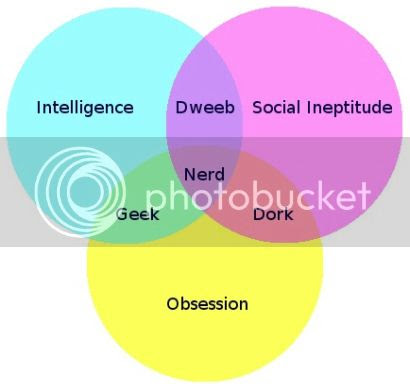 (Great White Shark)
Oh Venn diagram, how I love thy overlapping circles of knowledge.
On May 1st 2010, in the fair city of churches, Adelaide, Sth Australia, a robbery was thwarted by Spiderman, two Jedi and The Flash.  Well geeks in a comic book store, on International Free Comic Day, dressed as Spiderman, Jedi knights and The Flash, foiled the robbery.  And what was the evil doer stealing you may ask, why a comic book of course.  An X-Men Omnibus no less.  Yep the evil geek was captured by the good geeks.  Go geeks.  Now the evil comic napper nearly got away with it as bystanders at first thought it was a case of LARPing when the spidie suit-clad owner apprehended the theif, but luckily the Jedi with their super mind powers knew better and called '000'.  Love it!  You can read the full story here.

(I love the fact that in the 2001 census over 70,000 Australians classed their religion as Jedi).

Now don't get me wrong, I'm not paying out geeks.  I love me some geeks, especially being a geek myself (I am wearing a Wonder Woman t-shirt as I type).  I even married a computer geek (a very hot computer geek, but a computer geek none the less).  I am proud to say he doesn't own a pocket protector or Spock ears.  And thankfully he didn't propose to me in Klingon, but he is the kind of guy who thinks Jean Luc Picard is cool and whose list of ideal women over the years have included, Dana Scully, Samantha Carter and Seven of Nine.

In fact I do call him Comic Book Guy (from The Simpsons) and have brought him a little figurine of his alter ego.  His secret identity was confirmed when Comic Book Guy utter the classic words, "And I would like an hour on the holodeck with Seven of Nine", a Mr Grumpy fantasy of long standing.

("Lucite hardening... must end life in classic
Lorne Greene pose from Battlestar Galactica
... Best... Death... Ever."
Comic Book Guy as, "The Collector".  Photo from here)
For those unfamiliar with Comic Book Guy, a tribute can be found at Alt.Nerd.Obsessive.

I'll even admit that I didn't mind the new Battlestar Galactica (and I am very anti-remaking of the classics), though in my own geekdom I will say that Dirk Benedict will always be Starbuck to me (see I have been a geek for years). But I do think the use of "Frack" as a swear word was pure geeky genius. (Lt. Starbuck (Dirk Benedict).
Photo courtesy of The Geek Bookworm).
Now just as long as they don't try and re-do Buck Rogers In the 25th Centrury.  A modern day version of Twiki would be just wrong, or as he would say "Beedeebeedeebeedee...".  Oh wow, I think I just out geeked myself.
On that note I shall say good on you middle-aged men of Adelaide who are brave enough to wear your underwear on the outside and carry your lightsabres in public, whilst defending the world against evil.  "Live long and prosper", my dweeby brother and sisters, and "may the Force be with you".
Cheers
The geeky and very phlegmy Michelle :)
Star Trekkin', The Firm,  (1987). Luv it and I still know all the words. Made it to No.3 on the charts in Australia.  So proud.