Well it's Fabulous Friday once more.  Time to break out the bedazzler (or Tequila, your choice), whip out the feather boa, and find that little gold lamé and rhinestone loving part of ourselves, that we normally hide away for fear of shame and ridicule.

Today I will publicly celebrate my love of gnomes.

Kitch, Naff, Dorkapalooza, I can hear your derisive laugh from here, but I don't care.  I love me some gnomes.  A garden is just a bunch of plants and dirt without a gnome.

So I'd like to introduce Norman, the gnome in residence at Château Rusty, And being Fabulous Friday you know he's got some bedazzling going on.

Of course being my gnome, Norman, is a bit of a spiffy fellow.  He chooses to shine.  None of this boring red hat and blue pants crap for him, oh no.  Norman has a thing for the Silver Surfer, and has gone for the whole body shiny silver look.  Norman knows he has it going on! 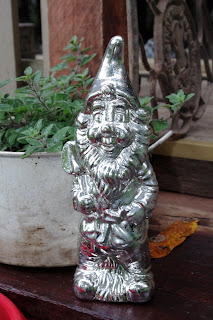 (Norman is such a camera tart). 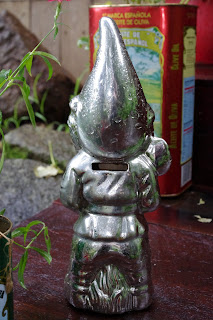 (Norman also fits well into our household as he's not quite right, note the large hole in his back.  But we are happy to welcome such a 'special' gnome into our home.)
Now for those of you who feel it is wrong to keep gnomes, rest assured Norman in no way works in our garden.  Norman is a gnome of leisure.  He relishes his role as gnome eye candy, and is content to sit back and look pretty.  He loves the way his silvery curves catch the sun and loves nothing more than to sit back and catch some rays.

Norman also gets to travel.  He travels up trees, behind pots, under ferns and to different garden beds.  Mostly this occurs with the aid of Mr Grumpy (the husband) or the rug rats, and mostly to mess with my head.  Apparently it's hilarious to place Norman in new and exciting areas around the yard and watch me try to find him.  This has even extended to the rug rats friends who also get in on the merriment.  But at least Norman gets to view the world from new and exciting vistas each day.

If however you are concerned for gnome welfare I have some sites of interest for you.

The public face of the Gnome Liberation Front, this site provides information relating to how to free a gnome, gnome freedom stories, and gnome freedom organisations around the world. Since 1997 it is believed that over 6,000 gnomes have been freed by the GLF.

The official gnome sanctuary for Europe, Barga is a place of safety for all gnomes.  This site provides information of gnome abuse along with feel good stories of their rehabilitation following emancipation.  There are also beautiful pictures of gnomes running free and playing in parks.

This site details many instances of gnome liberation around the world.  For example:

"In September of 2001, camouflaged personnel scaled a 3.5m (10ft) wall, navigated barb wire and an electric fence, and rescued the garden gnome from the house of the South African version of the TV Show, Big Brother. It was then taken to a pub".


It should be noted that unlike Norman's life of luxury, many gnomes continue to suffer abuse and gnomism permiates world wide.  Perhaps the most famous instance of gnomism is the continued gnome ban at the famed Chelsea Flower Show in the UK.  In 2009 contoversy arose when gnome advocate Mrs Jekka McVicar, breached these rules to place her gnome, Borage, in her design and was threatened with disqualification.  Borage was relocated but was proud that his presence had brought light to the important issue of gnome rights.

So lets all stand up against gnomism and gnome abuse and celebrate gnomes in all their glory.

NB. Living with Bob, is a pro-gnome blog.

(okay so I didn't design this, it can be found here)
Posted by Michelle Roger at 22:37