Falling down the rabbit hole. 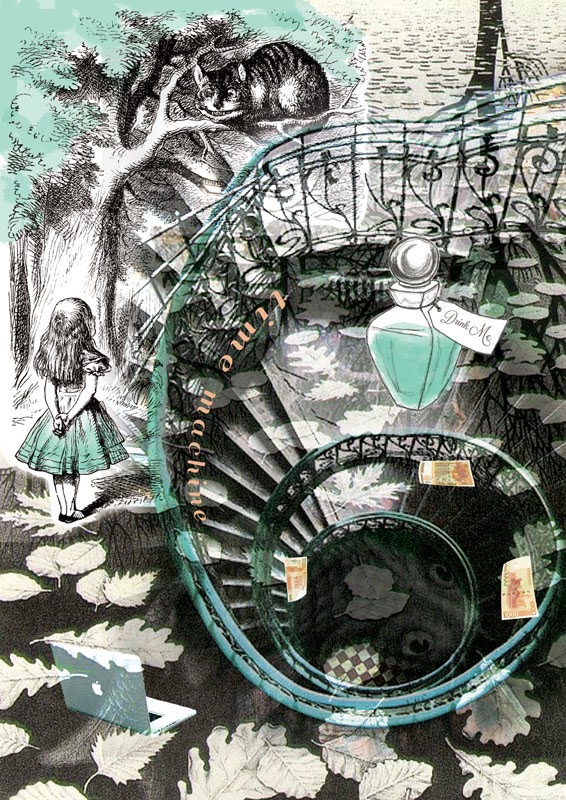 The last two, three, four months have been hard. My body has decided to do one of those fancy steps down, on the stepwise progression thingy. Or more, screaming, flailing leap, than step. I've tried not to let it affect me but it has. Denial is hard to maintain when you can't do a poo without face-planting on the tiles and being dragged limp and slurring to your bed. Or even better when no one is home and you're lying on the tiles of your bathroom, pants only just covering your sagging butt cheeks and your ever faithful canine companion comes, sniffs your forehead, and then sits promptly on your head. Or when your normally stoic other half keeps coming in every five minutes worriedly touching your forehead. Or you go to walk to the kitchen and end up on your hands and knees behind the couch. Or....

I can walk less. I can stand less. I have less control of my body temperature. And I've started losing weight again. But I have more syncope. And more pain, be it my feet, my stomach, or my head. None of my tricks are working. And as my cardio pointed out last week, I'm out of medical options.

And all of it is beyond exhausting.

I feel like the months have gone past and I missed them. I mean I know I was there. It's not like I have a Delorean or anything. Although that'd be mighty cool if I did. It's just been a fog of illness. A fog that has eclipsed the wider world. It's been one of those times where dealing with my body takes every shred of energy that I have and everything else is shut out into a half-arsed, half done, package of incompetence. Be it blogging, replying to emails, unpacking at our new house, or breathing, it's all been a half-arsed effort.

I've tried to be normal.

Head out for a coffee. Come home head between my legs, be dragged into the house to pass out on the bed. I've been out looking at potential new houses, only to return home a green-tinged blancmange, or simply cancelling at the last moment. I had a lovely visit with my Uncle and Auntie book-ended, by a body intent on expelling everything I have eaten in the last year, out of either of two burning orrifi, face-planting on the tiles in my bathroom, and coma sleep. I saw my cardio in the city last week and am still paying for it today, almost a week later. I have to head back to the city for more neurological tests in less than four days and I have no idea how I am going to manage.

We planned for tea out with friends at an actual restaurant. I prepared for days in advance. But my body said no. I'm not sure if it was the rapid revisit of the plain poached egg I'd attempted earlier in the day or the chunk of perfectly poached egg white that came out of my nose when I sneezed an hour later, that was the clincher. But I was made aware of the fact that I was not well enough to head out into society, or into my lounge. Luckily our friends were willing to do plan B of take away here at home where I could crawl into a ball on the lounge. They even put up with our insane dog who apparently had a snort or 12 of coke before they came. Good people.

It's just disjointed pieces of late.

Finding a spot to focus on. A task that I can actually complete in it's entirety seems impossible. Everything is sitting not done, half done, or forgotten in my sieve of a brain.

I waste energy on putting up the good front. I'm coping. It's all good. I can still laugh at it all. Life. I'm playing the part, not really living it. The truth is my body and I aren't doing all that well. Coping with a big deterioration is hard. I should say that out loud ten times. Scrawl it across my mirror and write it on my arms. Because it's the truth. I tell others to that they should speak the truth of illness, the ups and downs, and here am I still hanging stubbornly onto my pride. That message ingrained from my childhood that says "suck it up and be strong, don't be weak." The message I convince myself that I've conquered, until I realise that it's snuck back in and taken up residence once more in that hyper-critical part of my mind that likes to whisper sweet nothings in my ear.

Somehow I lost the ability to give myself the permission for space. Permission to breathe. Somehow I have forgotten that it's okay to say I'm really having a tough time with this crap. That sometimes it gets scary and sad. That I'm tired of being strong. All. The. Damn. Time. And that when you only have a thimble full of energy it's okay to use that thimble for yourself.

Life may be piecemeal for a while yet. But hopefully I'll get better at picking the pieces that are more healing.

I may be falling down the rabbit hole, but even Alice found her way home.

Michelle
Posted by Michelle Roger at 22:16