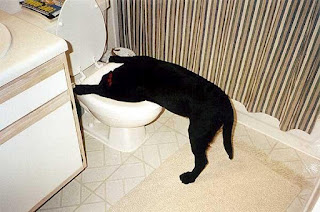 (photo)
Long time readers will know that my gastric system, decided to give up the ghost last year and I landed in hospital. Since that time I've managed to, if not greatly improve the situation medically, at least improve my acceptance that we may forever be frenemies. However, of late it has been getting worse. Obviously I wasn't paying enough attention to him and he's gotten a bit shitty (pun intended). As such, the frequency of my use of public toilets has increased significantly and my ability to get out is even more limited.

Yesterday I had the joy of sitting in the toilet of the L-plater's dentist, exploding at both ends, whilst grabbing the walls trying not to pass out. He luckily was oblivious and just happy to finally have his braces removed. Though apparently the desk staff did alert him to the fact that I was rather green and stuck in their loo when he did come out. And what caused this delightful hour of my life? Who the hell knows? I haven't changed my diet, lifestyle or meds. I didn't do a heap the day before. I didn't step on a crack or walk under any ladders. For whatever reason it felt a tad fractious and I paid the price yet again. Well so did the L-plater if I'm honest. It's hard to be excited about getting your braced off after 22mths when you're helping your mum to stand and walk in a straight line and then driving her home using all the short cuts whilst she's groaning and holding onto a puke bag for dear life.

Or there's last week where we had to drive the 10 minutes to the next town to pick up the youngest and we stopped not once, but four times on the way there and back. Admittedly, two of those times were aborted because a) the Victorian National Park Service decided to lock the public loos stating they didn't have funding to keep them clean. This was clearly evidenced by the fact that the one unlocked loo in the park was craftily decorated with fragrant nard sculptures by some arsehole. It sure made those treefern covered hills look tempting. And b) we drove another two minutes to the soccer oval on the outskirts of the town to find that they too were locked. At which point a tear may have been shed and the idea of simply dropping my granny undies where I stood was looking pretty darn good. Who the hell locks public loos? You people should be shot, or dosed with laxettes and let loose in an area where every public loo in a 10km vicinity is locked. How'd you like them apples? Eventually, we found unlocked loos in the town centre. As I sat there on that paper coated, bent and broken loo seat doing my best Mt Vesuvius impersonation, I may have said a prayer of thanks to every deity known to man for being open and sans nards. After picking up the youngest from his drama class we headed back to the same loos only to find someone had power spewed over the bowl, floor and walls and I was forced to use the men's silver bowl of foulness. Even with a Brazillian rainforest worth of loo paper covering that icy (it's Winter here in Oz) metal bowl it was only my desperate need that made me sit. And as I sat there abluting with gusto in that breezy, moist and fragrant Petri dish of humanity I thought to myself, "self, you are truly living the dream".

And such has been my life of late. Admittedly I am well overdue to go back to Gastroman. Last time he told me there was little left for me to try except for one med that was so far out of my price range as to be inaccessible. Add to that I have had so many other specialist appointments, a son with knee surgery and ongoing rehab, and just a general unwillingness to have yet another invasion of my orifices by a complete stranger, and seeing Gastroman has sort of slid down the list.

Logical me knows I should go back. Today for instance I am plied with meds and yet cannot keep even water in. I feel like I am permanently on the edge of yet another power spew or fire hose trots. It makes functioning rather difficult. Big props to my mum today though. When mid phone call I sort of screamed hysterically "I have to go and thrown up" she didn't bat an eyelid, just a quick, "I'll let you go, so you can throw up in peace" and she hung up. Go mum. It's times like these that you need those around you to not ask questions or get in between you and your porcelain lover so you can just focus on the task at hand, no matter how unpleasant it may be.

It's funny what you take for granted in life. Years ago I never thought much about going to the loo and I'm sure most healthy people don't. Now, it is an ever present thought in my life. If I am to leave the house I have to plan where I'm going by loo availability. I also carry emergency loo paper, towels and underwear. It's hard not to get depressed about it all really.

I know my parents and in-laws are little horrified with my openness about this issue. But lets face it I'm not alone. I also know it's not an area where you'll find much discussion in the Dysautonomia texts. It might be in the lists of possible symptoms, either constipation or diarrhoea, but there is little about what it means to actually live with the issue. It's not as simple as too much movement or not enough. It's the fact that tonight I can't drive my son to footy practice as the chance of exploding in the car is too high. It's the fact I am forced to use foul public toilets which others treat like an abhorrent ablutory free-for-all. It's the fact I can't leave my house to go shopping yet again because my bowels have other plans. It's the fact that the simple act of standing can be the only thing I need to trigger yet another gastric apocalypse. Buns of steel, and a perky can do attitude just don't cut it when your digestive system is broken.

So there you go. The saga continues and I am stuck in the batcave once more. standing and walking is a bit of a death defying act thanks to shakiness and weakness. Given it all leaves you pretty exhausted I'll no doubt sleep which is always a bonus (though the waking up with a mouthful of vomit is less desirable). No doubt my dreams will feature the things that need to be done to the people who lock toilets or act like foul pigs just because it is a public loo.

Hmmm given that I'm space-cadeting today I wonder if I should push post, oh well. Sorry if it's a little rambling or incoherent.

PS don't forget to leave your questions on Question Time, and I'll endeavour to answer them at the end of the week.

Now because I know there are others in the same boat I thought I'd re-share a little ukelele song that the truly lovely Elly from Bugginword did for me after my hospital stay last year. Every time I listen to it, it makes me smile and I hope it makes you smile to.