There’s a hole in the dura, dear neuro, a hole! 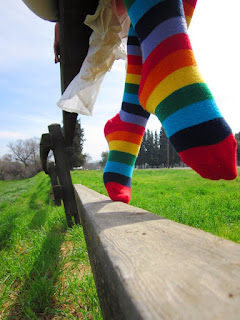 I love this guest post by Blooming Azaleah. As her bio says:


"When you're named after a flower, and live with Intracranial Hypertension, Dysautonomia, Gastroparesis, Pancreatic Exocrine Insufficiency and PTSD, all you can do is keep a smile on your face as you try to bloom in amongst the dirt!"

I found myself laughing despite the seriousness of, and no doubt highly difficult and distressing, situation she is faced with. She is a girl after my own heart who finds that a bucket load of sarcasm is an excellent coping strategy. Because lets face it, many of us are dealing with complex, distressing and often downright frightening health issues, and sometimes the only way to deal with all that is to laugh, big inappropriate belly laughs. She also wears the most amazing rainbow coloured socks and Wonder Woman pjs, which makes me love her just that little bit more. You can read more of Blooming Azaleah at her blog Blooming in the Dirt.


There's a hole in my dura, dear neuro, a hole!

Well, to be perfectly honest, according to all my tests and doctors, my dura (aka the protective layer around your brain and spine that houses stuff called cerebrospinal fluid or CSF for short), is perfectly intact. Can’t argue with science though, right?! Well, apparently my brain, dura and exceptional reservoir of CSF think they can.

For the past 8 weeks, I have been leaking CSF out of my nose, ears, and most recently my eyes. It really is so much fun to try and sleep with tissues crammed up your nostrils and into your ears because if you didn’t you’d need to sleep in a raincoat on waterproof sheets and pillows. Alas, sometimes the raincoat would come in handy when CSF is rushing out my eyes like Niagara Falls.

If the mental image of a twenty-something female with bright red hair, wonder woman pyjamas in bed wearing a raincoat and rain hat with tissues crammed up her nose and into her ears isn’t funny enough for you feel free to add the following. The image two nose piercings one of which is in my septum (affectionately also known as a bull ring) which when moved or knocked in the slightest(or removed in the morning) rips small pieces off the well formed, fitted and folded tissue and leaves them dangling off my metal nasal accessory like a dog who hasn’t had his behind trimmed or cleaned in a while!

I bet your thinking, isn’t that enough ridiculousness for one day?

To which I say, but wait there’s more! First I must apologise, as this offer doesn’t come with a free set of steak of knives. Sorry if you got all excited!

Given the fact that my head is currently in the phase of pressure cooker due to an overwhelming abundance of CSF, your head can’t expand with it and your doctors keep screwing your Lumbar Puncture appointments up, it starts to invade and press on your eyes.

They say eyes are the window to the soul, but right now all my eyes show is a way to solve the constant drought crisis here in Australia.

Which brings me to the next thing you should amalgamate into your evergrowing mental image!

Think of any fluid filled item, say like a hot water bottle, or one of those bendable gel filled ice packs. If you hold either one on their side, either horizontally or vertically, notice how all the liquid sinks to the lowest part and enlarges. Still with me?

Now, if you apply this too that red haired rain coated human, this means that if she lays on her side all that CSF liquid will sink towards the side she is lying on. Remember what I said about it invading your eyes? Well, because of the already high pressure behind my eyes, which with the low-lying liquid theory I mentioned above, means the eye on the side of my face I’m lying on is being put under even more pressure.

What’s so funny about this you ask? Well it means that my eyes become 2 different sizes. One of my eyeballs becomes quite withdrawn and not much larger than your average peanut, while the other transforms into a raging alien-esque basketball sized behemoth exploding from the socket. It looks absolutely ridiculous alone, but when you add that to the raincoat, tissues, piercings and pyjamas, you can understand how you can’t do anything in this situation but embrace the absurdity and bathe in it’s hilarity. Granted, I could always kidnap and torture my neurologist until he does the lumbar puncture he promised 8 weeks ago, but while torture and kidnapping is still illegal, it’s much safer to laugh!

There’s one last image I have for you today. On top of this overabundance of CSF condtion I have called Intracranial Hypertension which the pressure is raised even further when laying flat, I also have Dysautonomia which causes me to have low blood pressure at the best of times, which is lowered even more by sitting or standing up.

Given the fact that my CSF pressure is already high, I’ve been avoiding salt like the plague, which has meant I’ve been stupidly dizzy and in a low blood pressure stupor for a while. When you add to normally crap low blood pressure, the maximum humanly tolerable dose of the diuretic medication, things aren’t exactly fun!

I can’t lay flat to raise my bp, because my nose, ears and eyes will spring another leak and give me the killer headache of doom, but I can’t even sit upright or stand to lower my CSF pressure, as if I do I’ll get dizzy and collapse, and knowing my luck hit my head on something on the way down leaving me with an even worse headache.

So how does an orthostatically intolerant girl with an exploding head sleep in this situation?
You know those fold out beds? The ones that have a single fold in the centre? Well imagine someone sleeping on one, and halfway through the night that centre joint gives way causing each end of the bed to fly upwards leaving the person semi squished in a V type position. That’s how I sleep right now! Thankfully I prop my head and feet up with pillows and phone books, so as to avoid that awkward nightime awakening squished in between a fold out bed!

So to summarise that mental picture for you. There is a girl with bright red hair wearing wonder woman pyjamas topped with a raincoat and matching rain hat. Her ears are stuffed with tissues, as is her nose. The look is accessorised by unmainated dog-butt like shreds of tissue on her septum piercing. She has no need for eye make up as her eyes sparkle separately with the torrents of Niagara Falls- one peanut sized and one exploding alien behemoth. If that isn’t enough, she has the luxuty of sleeping seated in a V position, reminiscent of even the most hilarious fold up bed malfunctions!

I could of very easily written my first post of new blog as a long whinge and rant about horribleness of douchebag doctors and their inability to help their patients via a very routine procedure, but I chose to share the secrets of my current sleeping arrangements- which is much more entertaining, if not slightly embarrassing, I think! But, next time you want to whinge about how you couldn’t sleep because their was a dog barking or your neighbour was too loud, just remember, you could be forced to sleep like I do!!