The Ministry of Silly Walks

Walking shouldn't be hard, should it?  If my eldest could walk at 9mths, surely I should be able to walk with ease at 37.  Mind you, I am walking like he was at 9mths.  Furniture and wall walking my way through the world.  It's a good look.  What is cute and gives rises to "oohs" and "ahhs" and "who's a clever boy" at 9mths, is not met with the same enthusiasm by the general public at age 37.  Instead I am the recipient of 'those' looks.  And little whispered comments, which seem to include the word 'drunk' quite frequently.  If only, judgmental old biddies.  If only.

These past few weeks I have been walking like a drunken sailor, minus the barrel of rum in my belly.  I have found that my gait is getting wider, what in the old work days I would have thought of as a classic alcoholic ataxia.  Only I have had hardly enough alcohol to pickle an olive, let alone my cerebellum.  My muscles have been uncooperative little buggers, and my weakness increasing.  They simply feel 'wrong' when I walk.

Can't wait to give Uberneuro that descriptor when I see him in June.  A patient's inability to explain their symptoms was always a frustration for both parties, back in my work days.  I would hand them a sheet of descriptors to pick from when they were finding it particularly difficult. Maybe I should see if I can find it again, to use for myself. Damn, that's a depressing thought.

I don't really know why it's come to a head lately.  Maybe it's just the effects of my recent back issues tipping things over the edge.  I'm not really sure.  Given that my pulse pressure (systolic minus diastolic) has also been in the toilet I think Bob is getting a bit frisky in his old age.  When 40 is optimal, 30 is considered okay, 20 is considered shock, and all I can muster is a pissy 9, well it's not a particularly good situation.  It could just be a phase, and I'm truly hoping that's the case.  All jokes aside, the past month or so has really been hard and I've had about enough. 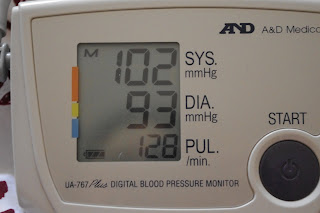 (Was lying down at the time I recorded this)

My neuro symptoms have been getting worse overall.  I tick and shake, and have muscle fasciculations up the wahzoo.  Managed to burn myself on the stove again thanks to the reduced feeling in my hands (good old SNAFU), which is always fun.  I asked my youngest if I had burnt my finger and he rubbed it, taking off a layer of skin.  Apparently what looked like flour was a wee bit of charred skin and we both had a bit of an "oh shit" moment.

Luckily I finally have my appointment date so fingers crossed Uberneuro will have a clue.  I used to take classes with him back in the day so I am confident he's the go-to-guy when no one else has a clue.  But seeing someone I knew on a more professional basis will be uncomfortable to say the least.  I know his current Neuropsychologist quite well.  I was on our state professional board with her, so I'm really hoping I don't bump into her.   It's moments like those that I feel really self-conscious and it all gets a bit confronting. Ugh. That's all way to serious and depressing.  Will now play my happy song in my head and settle down to a nice bowl of denial.

I have finally taken the plunge this past week, and am now the less-than-proud owner of a walking stick.  I have put it off for a very long time, despite having balance issues on and off for quite a while (okay couple of years).  I knew I needed one, but my mind screamed "NOOOOOOOOO........" every time I saw one.  Now before anyone starts saying, "well you have to be practical Michelle", you should also know I will beat you to a pulp with my stick if you even start to go there.

People need to realise that:

Logic and Chronic Illness are not friends.

They're not even casual acquaintances.

In fact, if Chronic Illness was to serve Logic a drink it'd probably spit in the glass and smirk, whilst they watched them drink.

It's a mind space that you are either in, or you're not.  There's not a lot of grey.  Logically I have known that I needed some form of walking aide for well over a year.  But every fibre of my body has rebelled against the idea.

I had a similar predicament with the shower chair.  I have a shower chair now, and I love it.  It means I can shower without face planting.  It means I can have the water above tepid, and stay in for longer than a nanosecond.  And it sure as hell beats sitting in the bottom of my manky shower.  All good things.  But the lead up to getting a shower chair was not paved with lollipops, kittens and rationality.

Buying a shower chair represented tangible proof that I was broken.  Ptooey!  I spit on 'broken'.  "That's not me," I shouted whilst raising my fist in the air in defiance.  Not that anyone was listening.  Except my dogs, and they just looked confused.  It certainly didn't help that they were sold in the 'Aged Care' section of the store.  After a long period of denial, ranting, head shaking from a long suffering Mr Grumpy, and traumatising my dogs, I purchased a shower chair.  There may have been some pouting and swearing involved.  I may also have forcefully thrown it at my shower, rather than going for gentle placement. Whatever.

I still remember sitting down for the first time and thinking to myself,

"I'll show them.  It wont make one bit of difference.  I'll be right and they'll be wrong.  And I'll say see, see, SEEEEEEEEEE I was right, losers".

But damn it.  It was better.  And easier.  And they were right.  And I was wrong.  Bastards.   See the extreme lack of logic involved?  I think I should be studied.  Or at least better medicated.

The reality is that I am now disabled.  And at some level I acknowledge that.  But there is a very large irrational part of me that continues to rally against that label. I spent my professional life, working in neurorehabilitation.  I helped to plan ways to maximise independence, including the use of lifestyle aides like shower chairs.  I know the theory.  I've seen it in practice.  And yet I still rally against it all.  As I said, logic is not my friend.

The acquisition of a walking stick has fallen into the same category of rabid illogical thought processes.  No doubt there will be many other items that will flail beneath the sword of irrationality, before I finally reach the point of acceptance and pull my head out of my own arse and acquiesce.

I am still on the lookout for a groovy walking stick, is that an oxymoron?  I'm not sure.  I really want one of those classy silver handled, black ones that look like they should be in an Agatha Christie movie.  But will have to save up my pennies.  I do feel as though I should be wearing a top hat and a monocle when I walk with my current stick.  And saying things like "tally ho", or "jolly good show old chap".  Or at least break into a song and dance routine complete with jazz hands and spirit fingers.  But baby steps first.  Coordinating, two legs, a stick, a handbag and breathing is still troublesome at present. 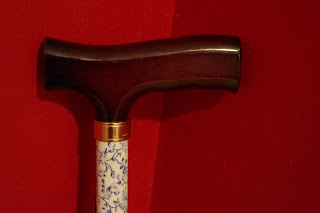 (It's grannified but it works)

I have used my stick as a light sabre, complete with sound effects.  And as an improvised guitar whilst listening to AC/DC.  It has also proven a great tool to poke cheeky children.

I did see a fantastic sword cane (think Crispin Glover's, The Thin Man in Charlies' Angels)  which I want very badly.  That way I can stab people who tell me it's greatI finally purchased a walking stick.  And muggers beware, this disabled, uncoordinated chick would take you out.  It's all very James Bond.  Maybe I can also get one of those bowler that cuts off peoples heads, like Oddjob's in Goldfinger.  Now there's an idea.  I think I'm finally starting to come round to this whole walking stick idea.