You Get Less For Murder. 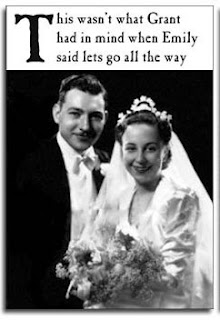 17 years ago this past week, I narrowly avoided spinsterhood by becoming Mrs Grumpy. It was a close call really. Some days I look in the mirror and think, "I'm about 39 cats short of becoming crazy cat lady".  Left to my own devices I have no doubt I would have soon become a weird old lady with birds nest hair and a face like a desiccated apple, who spends her days in in depth conversations with her furry brood.

Luckily fate intervened. I met a man who has a more realistic, although what I consider despotic, pet policy than myself, and I have been restricted to one slightly feral and very incontinent cat, and two intellectually challenged great danes. Avoidance of cat crazy is a good reason to get married people. I mean, I still intend to become one of those old ladies who farts, swears like a sailor, tells inappropriate jokes, and uses her age to freely grope hot young men. But that's the kind of crazy we should all aim for in our advancing years.  Oh, and before you ask, 40 cats is the official crazy cat lady decider.  39 all okay.  40 and you're in pathologically unhealthy feline lover territory.

We met long, long, ago, in a galaxy far, far, away known as the Australian Defence Force Academy. Such a romantic venue. Guns, camouflage gear, buzz cuts, marching, cheap alcohol, co-ed dormitories and the smell of gun oil and shoe polish in the air, how could you not find love? I still find it amazing that he saw me in my un-sexy Navy uniform and wanted to date me in the first place. Maybe he had a secret thing for old ladies, because frankly the white female naval uniform looks like a lawn bowls uniform. Hmmm, maybe that explains my prodigious lawn bowls prowess?  All I know is there is nothing more romantic than a guy who is willing to clean your rifle, and spit polish your shoes.

17 years. 17 long, oh my lord how long, wonderful years. Being the sentimental type, Mr Grumpy loves to sing me AC/DCs, Jail break, whenever we discuss our years of wedded bliss.


Jury found him guilty
Gave him sixteen years in hell
Bwahahahahahahahaha. He's a funny man. You should have seen him when our 16th year rolled round. He was in sarcastic nirvana. But that's what you get when you marry a man with a fondness for flannel, scifi, red wine and 70s and 80s mullet rock. I should also mention that he wanted to have Motley Crew's, Kick Start My Heart, as our wedding song. Needless to stay he was disabused of this idea rather swiftly. Mind you considering we ended up with the gag inducing, hideous theme to The Body Guard, I Will Always Love You, (don't ask, long story) as our song it would have been a better choice.

It's amazing we've lasted.  Or as my delightful brother in law said in his toast, "lets hope they stay together for a while", (yes BIL, I will be milking that one for ever).  We were married young by today's standards, me 20 him 21. Mind you we met when were 17 and 18 respectively so we'd been together for a while. Ahhh the stupidity of youth. Add to that and I was up the duff with our first by my 21st (oh yeah party on down, 5mths pregnant, mastitis, antibiotics, and still having morning sickness, every girls dream come true) and we have repeatedly bucked the life milestones trend.

It hasn't all been roses and candy canes. We fight. We yell. There are days where I would gladly put his junk in a garlic press and crush down, hard. Or put his head in the loo and flush and flush and flush and...... I'm sure he thinks the same about me. But that's the beauty of marriage and it doesn't mean I love him any less (though I do wish he would outgrow his childish delight in the act of dutch ovening me, or farting in the grocery isle and running off so everyone thinks it's me).

Marriage is about putting up with the crappiness, and thoughts of homicide, because it is generally outweighed by the good stuff. The fact he remembers the day we had our first date. The fact he knows I hate carnations (bad teenage boy baggage) and has never ever brought me any. The fact he knows exactly how to make my cup of coffee or only buys the brand of chocolate I like. The fact he knows the exact amount of Vegemite I like on my toast (for my international readers that's just waving the Vegemite covered knife in the vicinity of the toast, not thick like peanut butter which is a disgusting rookie mistake). The fact that he still likes my boobs, even though they have gone from a B cup to a singlet (his favourite saying is “more than a mouthful is a waste”, Shakespeare eat your heart out). The fact he sat in an MRI and held my foot because I was so nervous. The fact he accepts my quirks and just shakes his head. That is what love and marriage are all about.

So happy Anniversary Mr Grumpy, and many thanks for still thinking my butt is worthy of grabbing in public.

For those who like their love posts a we bit more soppy, I have managed to do it once before in an ode to Mr Grumpy.