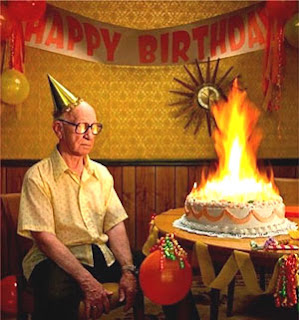 I couldn't have planned it better if I tried.  My blog's 1st birthday falls exactly on a Fabulous Friday.  Yay, 1 year old today.  It doesn't look a day over 6 months.  Oh, and I should say up front, offers of cake and presents will be gratefully accepted.

I think I'm supposed to get all sentimental and review my year of blogging.  What has changed?  What is still the same?  What have I learnt?  What do I wish I had never, ever, exposed to the world?  What does the future hold?

What has changed?  Well after careful examination, ie sitting here for half an hour alternately staring blankly out the window and faffing about with font styles, I think a couple of things have changed.

Discussions involving my bowels seem to have increased.  But then again who doesn't find a poo or fart joke funny?  Okay maybe just me, but I'm okay with that.  I live in a house with teenage boys, a juvenile husband, and flatulent pets, plus I have IBS.  The rear nether regions are thus a prominent feature of my day-to-day existence.  Add to that, I am way too lazy to censor myself.  So odds are in favour of bowel related discussions continuing.

As recently pointed out by the Vegetable Assassin, my open appreciation of men without shirts has also increased, leading to somewhat of a bloggy theme.  But hey would you really rather me discuss my bowels or male eye candy?  I know I should probably be more mature and discuss big meaningful issues, but lets face it that is not likely to occur any time soon. 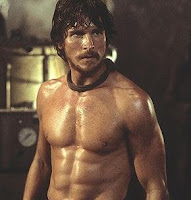 (Gratuitous hot shirtless guy shot.  Okay he may be a douchebag in real life,
but he is mighty easy on the eye)
I may also have gotten a tad more sarcastic over the months.  But considering that I started off on a bit of a sarcastic high it's sometimes hard to tell.  And before anyone points out that 'sarcasm is the lowest form of whit', I can tell you right now I'm okay with that.  I am also okay with my appalling grammatical skills, my ever decreasing use of the spell check function, and loathing of all things Twilight related.

I have made a concerted effort to move beyond the sick thing, hence the idea of the Bob-free Fabulous Friday.  When you are chronically ill, being sick can become your whole world.  You live and breathe illness.  You lose sight of the rest of the world.  That's not that unreasonable as illnesses like Bob, tend to control and curtail your ability to be in the world.  But total focus, will lead to an eventual stay in crazy town.  I know.  I've been there.  I still focus on being ill when I have to, but for the most part, I now try to have a life outside of the crap.  Being sick is just one part of my life, it's not the sum total.  Okay, that sounds way too Oprah or Dr Phil, (shudder).  I refuse to have a "lightbulb moment".  I will go and sit in the naughty corner until I can get back to my usual anti- touchy feely self.

I have met a lot of equally insane and truly wonderful people over the past year, who for some reason enjoy my blogging efforts.  I'm pretty sure that there is a dot point somewhere in the DSM-IV-TR, that says liking my blog is up there with bed wetting and torturing small animals as a marker for psychopathology, but I could be wrong (please keep reading people, remember sarcasm).  Unlike me, there are some very funny and very talented people out in the blogosphere, and I feel lucky to have been able to find them.

I've gone from feeling like the only person out there with Bob, to finding a whole community of people just like me.  Good for me, but crap for them, I don't wish Bob on anyone.  It's probably the one thing I really like about the internet.  To give you some perspective there a sum total of 12 people on the Aussie Facebook site (I know there are more of us out there, but we are still few and far between). Add in the fact we are often not the most mobile people, and the internet lets you connect with people all over the world without leaving your couch.   It's also kind of nice that my feeble attempts at writing are able to help others feel not so alone.

What has stayed the same?  Lets see.  Bob is still there.  Bastard.  He continues to be the pimple on the arse of Satan, that has taken to residing in my house.  I still feel like crap on a daily basis.  Despite being poked and prodded and used as a pharmaceutical guinea pig I am pretty much still in the same state of shiteness as I was 12 months ago.  That is the joy of chronic illness.  And really that is all kinds of dull and depressing, so no more of that.

What have I learnt?  Well, the biggest would be that sarcasm does not always translate well to the written word.  There are also some issues with the whole international thing.  Little did I know that terms such as "Dutch oven", are not international.  Is 'loo' really that strange?  Or as I have recently been alerted to on Twitter and commenting on other blogs, "Bogan" and "Mexican wave" are only Australian terms.  I shall thus refrain from the use of ethnocentric terms such as "Stone the Crows", and "Strewth".   Maybe I need to develop a glossary or Dummies Guide (don't get excited, apathy will win out on that one, try this instead).

I simply don't/can't take life particularly seriously, unless I really have to.  I make fun of me and of being sick.  Call it a coping mechanism if you like, but hey as the Monty Python guys say:

And to clarify for Anonymous comment person (why are they always anonymous?).  My porcelain lover, is not a reference to some albino guy I am having an illicit affair with.  This is my apparently very confusing, reference to my toilet.  If you have Bob you spend a lot of up close and personal time with your toilet.  As such, I felt it needed a new name.  So Anonymous Einstein, I don't need to go to marriage counselling and I am not looking outside my marriage for solutions.

I have also learnt that there a lot of people in the world who need a glittery pair of shoes in their life.  I thought it was just me who had a thing for glitter, but apparently not.  My one birthday wish would be for all my readers to go out and embrace their secret glitter love and make themselves a pair of heels, boots, thongs or uggs.  No crocs though.  I refuse to have beautiful glitter sullied by being associated with a pair of butt ugly crocs.  That is glitter blasphemy.

And finally, what do I wish I had never exposed to the world?  Hmmm....  I know I should probably regret something, but I don't.  I mean I'd like to have at least a Grade 2 level of grammatical prowess, but that's just not going to happen, and other than that, nothing really jumps out.  I'm not even ashamed that I outted myself with regards to my love of all things ANTM.  Generally, I push the 'publish post' button, grab a coffee and forget.  My blog is what it is, the dross from my head.  Life's to short to worry about what I put out there.  Besides there are a lot more freaky and disturbing people than me in the world.  In fact, a quick review of some of the blogs out there and I feel positively normal.

What does the future hold?  My guess is more sarcasm and a continuing dedication to mediocrity.  I shall no doubt continue to make fun of 40-year-old women with 'Team Edward' t-shirts, and anything Justin Bieber related.  Inappropriate jokes will abound and Bob will undoubtedly rear his ugly head.  I also plan to start some sort of fund raiser for the glitter deprived.  See big plans people.  Big plans.  I know you are all completely under-whelmed with excitement.


Happy 1st Birthday Blog
And thanks to every one of my super intelligent, witty and dead-sexy readers.  You all have a special place in my heart.