Friday of Fabulosity is here once more and this week I am in a bit of a quandary.  Last weeks ode to the Dorothy Shoe's turns out to have been my biggest post ever.  It was like glitter appreciation went viral, and women world wide lost their glitter-deprived minds.  Thanks to all for the inundation of comments, messages and emails.  Glad my little pair of heels could brighten all your days.  If you took the challenge and broke out the wine and glitter I'd love to see pictures.

But how do I top that?  Frankly I doubt I ever can, so I'm just going to tap away on the keyboard and embrace my 'meh'.

Today I thought I'd celebrate one of my favourite childhood TV shows.  I don't know if it was ever a hit any where other than Australia, but it was TV gold and the world needs to know and appreciate the brilliance that was, MONKEY! (you have to shout it in a bad Asian accent or it's just not right). 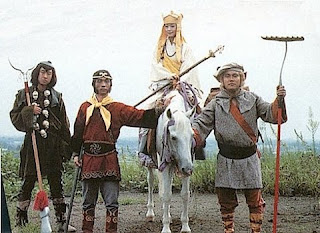 (From left to right: Sandy, Monkey, Tripitaka, & Pigsy, photo from here)
(Monkey Opening Theme)
Now if you are Australian, and you grew up in the 80s, you know Monkey.  It was part of the after school line up on the ABC, along with other classics like, Dr Who (Tom Baker will always be my the Dr to me), De Grassi Junior High, The Goodies, You Can't Do That on TV, and various cartoons like Danger Mouse, Roger Ramjet, and Banana Man.

Monkey was an integral part of my childhood, and my after-school ritual.

Step 1: make up a plate full of dry Weet-bix, slathered in margarine and strawberry jam.
Step 2: make large glass of milk with chocolate Quik.
Step 3: sit in my parents bedroom and turn on their tiny portable black & white TV.
Step 4: sit on the edge of the bed and watch show after show until tea time. Or plead with mum to let me eat my meat and 3 veg in front of the TV.

Monkey at 6pm was always the highlight.  How can you pass up a show about a magical monkey king who flies around on a cloud?

For those of you who have never experienced Monkey (and I do feel sad for you) I'll give you a quick synopsis.

Monkey was an English dubbed, Japanese TV program, based on a classic 630AD Chinese story.  It was only produced for two seasons (1978-1980), but thanks to repeats I swear I saw every episode about 20 times (which may explain why I can quote large sections).  Looking at it now I wonder how they ever got it on TV, but it was a product of its time and as a child you were simply mesmerised by the exotic fantasy of the whole production.  On a television dominated by British, Canadian and American content, Monkey stood out, and grabbed the imagination of a whole generation of children.

It had the perfect over the top Asian accents.  What Australian child didn't go around the school yard saying "Ahhhh Tripitaka" or "Oi....Pigsy"?  Or know how to summon their magical flying cloud or fighting staff?  The acting was as over the top as the accents and I loved it.

The whole show is about Monkey and his friends heading from China to India in search of holy scriptures.  Tripitaka, the virtuous priest (played by a woman for some reason) is the only pure one, or "Holy Fool" as he/she was frequently called, in the group.  The others Sandy (water monster and ex-cannibal), Pigsy (pig monster consumed with lust and gluttony) and of course Monkey had all been expelled from heaven for various reasons and part of their journey is to find redemption, whilst kicking lots of demon arse along the way.  They were later joined by Horse (an ex-dragon), but I was never a huge fan.

This site gives a better round up of the whole story than I could, so if you want to know about Jade Princesses, Heavenly Naval Forces, and the like head there for a wrap up.  The story took almost every fable and fairy story from the Chinese culture and packed them into an action packed, hilarious series.  Mind you as a child I was not really aware of the complexities of the story and they really aren't necessary to ensure enjoyment.

Thinking about it now, Monkey was our 80s version of Buffy.  There were monsters and demons in all shapes and sizes.  Great fight scenes.  Evil was vanquished.  The Princes was saved.  Redemption was sort and found.  What more could you possibly need.  No wonder it has become a cult classic.  Even now, as a 37-year-old woman, I continue to love Monkey.  I may or may not, have wasted the better part of an afternoon watching episodes on YouTube, all in the name of research.  I may or may not, go back and watch some more episodes after I press the post button.  I almost think I can hear the chocolate milk and Wheet-bix calling me back to 1985:


I leave you with a fantastic compilation of all that made Monkey great. Enjoy.