Fabulous Friday: I Am Woman Hear Me Roar.

Politics as a Fabulous Friday topic? I know you all think I've finally lost the plot. First it was my need a slap, woe is me post, and now it's politics, clearly I am in need of help. I'm as shocked as you that I'm writing about politics on a Friday but it's happening.

The last two days have been a bit of a political roller coaster here in Oz.  And I am still regaining my feet.

I never thought that one little moment in politics could make me feel all warm and fuzzy inside. But at 12:30pm on the 24th June 2010 it actually happened, and I find it Fabulous.


Australia now has it's
first ever female Prime Minister,
Julia Gillard.
Woo Hoo!
Now before anyone poo poos this.  I don't think she will make a better PM simply because she is female, only time will tell if she is any good in the roll or not. Nor do I ascribe to her politics. But as a woman, I feel a whole lot of girlie excitement.

Whilst it has been possible for a woman to take the top office, this is the first time the dream has ever been realised and for me that raises it to a tangible possibility as of yesterday.

It was the first time I have ever spent hours watching political TV. Watching her being sworn in I actually got a bit teary. I was totally surprised.

It was just one of those moments where you feel a little like you stepped through the looking glass. A bit bewildered, but very excited. 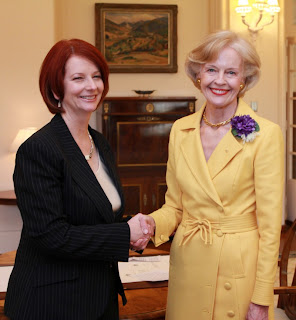 (PM Julia Gillard and Governor-General Quentin Bryce. photo from here)
I wont bore you with the political wrangling behind it all, there's plenty on the net if you are interested, because in many respects I think that is superfluous to what the event represented.

Growing up in the 80s I never could have foreseen this moment. Politics has always been the domain of middle-aged white males. There have been women involved (and I certainly wouldn't have envied them trying to break into and survive that boys club) but men still dominated. The women who made those pioneering inroads into politics should be applauded for their achievements. Click here for a quick history of women in Australian politics.

Julia Gillard has taken it that step further to take the top job as leader of our country.  She also represents a move from the traditional cookie cutter politician. Apart from the obvious female factor, she also:
(*The Deputy Opposition Leader is also currently a woman, Julie Bishop).
That pesky glass ceiling has been smashed in a very tangible way. I'm not naive enough to think that her achievement means that all the sexual inequalities that pervade our society are now magically gone. But for the moment I am going to bask in the idealistic glow of her appointment. This time next week I'm sure the light will probably be dimmed and we will be back to politics as usual. Plus, I love that Julia Gillard became the highest rating trending topic on Twitter. Take that Justin Beiber.

Personally, I can't wait until gender is no longer a news worthy issue (I think its called the 'Watching Way Too Much Star Trek' effect) and it's all about who's best qualified for the job. But that's for another fabulous post in a future where poorly fitting lycra body suits are fashionable for both sexes.  Today I'm enjoying a bedazzling moment in our nations political history.

In honour of Julia's achievement I give you the arse kicking Annie Lennox and Aretha Franklin.