The last week (well 'weeks' if I think about it, but that's just plain old depressing) has been a health shit fight.  My body has decided to demonstrate just how incompetent it is on the whole functioning front.  My BP has been all over the place as has my HR.  There is no consistency, no rhyme or reason for the crappapaloza that's going on.  It's not like I can say it was particularly hot on Thursday and that's why I don't recall from early afternoon till the next day, because it wasn't that hot.  Similarly, why did my body go arse up whilst I was driving, so that my panicked eldest had to tell me to just drive straight home from his bus stop, because I was green and my face "wasn't quite right"?


Most annoying, troubling, for me is that I have gone back to the swoon or the 'less than one second till' swoon, whereby I barely get enough time to lie down to avert full swoon mode.  This just isn't part of the plan and I wish that my stupid body would get with the bloody program.  Yes I used the word swoon.  I much prefer it to the inadequate terms like 'passing out', 'fainting', 'blacking out', syncope or my personal least favourite "simple faint".  Simple faint my arse.  That term could only be thought appropriate by people who have never experienced the delight of a 'simple faint'.  Unlike these inadequate words, 'swoon' just screams 1920's silent movie glamour and is much more palatable.  If I have to do the whole syncope thing I'm picking my descriptor. 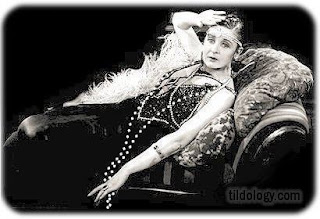 I do quite like this modern day version as well (well more the clothes really) All very Mad Men. 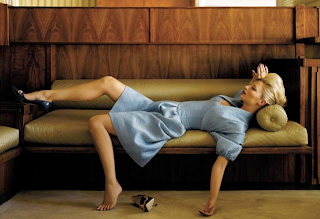 Amy Neunsinger
Unfortunately the reality is more likely to look like this: 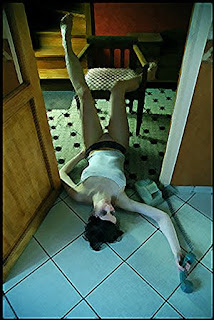 (Ahh the elegance).
In reality I know I shouldn't be complaining.  For some, swooning is an every day event or for the unlucky few an hour to hour phenomenon.  Luckily for me I'm an occasional swooner thanks to the meds.   I mostly do a sort of half-hearted piss-poor excuse for a swoon now.  Yep can't even do that right, my body is such a useless douche bag.

Early on in the piece I had no real warning.  It was case of me standing in lounge room.  Then me waking on the floor going 'WTF'????  Meds have changed that thankfully.  Now I get a lead up.  What's known as pre-syncope.  This is the delightful state of hot flushes, greying vision, nausea, muscle weakness, pasty chic with a touch of vomit green, confusion, lack of coordination and so on.  Unfortunately this lead up is pretty much my permanent state now.  The only difference being the symptom severity.  But these last few weeks my lead up has shortened.

I knew last week things were not looking good early on in the day. 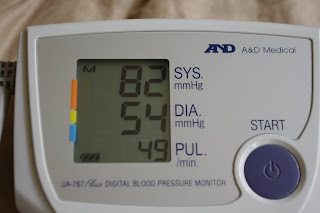 (Hmmm should I stay home and try and rest. No.  Go out and do lots. No problem).
But at least my heart rate was out of the low 40s.  I had hoped that the day would improve.  Looking back I realise the lack of blood flow to my brain was probably begining to affect my thinking.  I managed to get to my friend Kezza's house, luckily only 5 mins away.  I managed to stay for a couple of hours chat and have coffee.  I should have realised that the fact that it took 3 of us to create a Wii character for Wii Fit that things were not exactly shining brightly. Problem was that this was really the last thing I recall clearly that day.

I don't really recall driving home, picking up the kids, shopping or getting home but I must have done it all as I had 2 kids winging like usual, there was food in the fridge and I was KOed on my own couch.  But that's it.  I know I ended up in bed but I'm not sure how.  I took my BP but I don't recall pushing the button.  Luckily my machine records your last level. 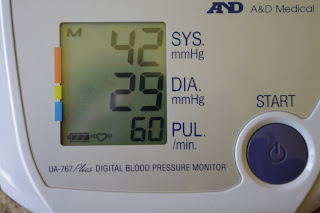 (Bugger.  Pretty sure I may have been away with the pixies by this stage).
Call me crazy, but I have a feeling that this could be reason why I don't recall the rest of the day.  And they keep saying high blood pressure is the problem.  (They also say salt is bad.  Unless you are a freak like me.  Obviously Bob is the king of Bizarro Illnesses).

Unfortunately it was Ground Hog day, yesterday.   I kind of remember David telling me to get out of my dress and put on my pjs, but I could be wrong, I'll have to check.  I do know I woke up in pjs so I guess it happened at some point.  WTF body!!!  I am on a cocktail of drugs to stabilize my BP, I scull water and eat so much salt I could pretty much double as Lot's wife, and this is what I get.  Stupidly I also have other days where my BP does stupid things like 140/115.  Or days where it is 100/92, so I have no pulse, which gives a whole new to the term 'looking like death warmed up'.  I have also had periods with a HR of 150+ just sitting on the couch.  Who says you can't get a work out whilst watching TV?  Mind you one of those times I had just been watching Jensen Ackles on Supernatural so maybe that's the true cause.

The result of this is I am exhausted.  As I sit here writing I am feeling like a space cadet.  I am pretty much the poster child for "Lights On No One Home".  My head feels like it may explode in the next 3 seconds, my muscles are jelly, I am uncoordinated and keep hitting walls, tables, fridges etc, I really wish they'd stop jumping out at me.  I also put my saucepan of milk on the stove this morning, only problem was I forgot the milk part, and turned it on anyway.  Mmmm nice warm air to put on my oats, tasty.  I have a series of 'mystery' bruises on my legs, arms and feet and I have no idea where I got them.  So now I have purple and black legs, sexy!  I am also starting to rue the day we picked a house with 3 fights of stairs, which leave me breathless.  Now it's just the week of recovery, ie back to normal crappness. Swooning sucks.

It may be time to send my body a 'Dear John" letter.  I think it'd go a little something like this:


Dear Body,
You are a dick.
Go self fornicate.
Cheers
Michelle.
Ok so I may be a little shitty today.  I've had a crappy week(s).  I did hear that Bob used to be called 'Irritable Heart', and I know I also have an "Irritable Bowel", so maybe I'm just plain old Irritable.  I'm sure when I read this back in a few days I'll be horrified by my poor attitude but hey at the moment there's no blood going above my irritable shoulders so the old brain filter is on the fritz and I've pushed the publish button.  I'm pretty sure this is the blogging equivalent of drunk dialling.  So I guess I should leave it with "I luvs yas all. I do. (hic) I really, really (hic), really love you. I do.  You're the bestus".

I think I may have to invest in a Fainting Chair.  I've always liked them.  Maybe that was a sign of things to come.  They were very popular in the Victorian Era for all those poor corseted women, with such small waists they made Posh Spice look like Barbar.