How To Spot A Sick Chicken.

I'm pretty inured to the whole "you don't look sick" line. It all becomes white noise after a while, though I will admit to often thinking, "well you don't look like a knob either", but I generally have enough tact to keep that to myself. Well sometimes. According to my loving family, I occasionally have a bowl of bitchy for breakfast, and my Mother Teresa persona is replaced by a large dose of bitch with a side of cow. Usually, this has something to do with a lack of coffee, and really if you speak to me pre-caffeine that's your own fault.

[Image: A Vintage image of a woman holding a cup of coffee. To the right of frame in black text it reads: I haven't had my coffee yet. Followed by red text which reads: Don't make me kill you.]

In many respects, I'm over what other people think. I have enough on my plate without taking on other people's issues. But recently my happy-hippy, zenness slipped. A few weeks ago I was informed by a relative who shall remain nameless (but we both know who you are and you should know better than to piss off a person with a blog) that, "You can't expect sympathy with that face".

For some reason, the bluntness of this statement hit me like a full on sucker punch to the gut. I was lost for words and just stood there with my mouth hanging open. What was I supposed to say to that? Would I have been within my rights to pick up the coffee pot and send it flying across the room at their head? Was it okay that I had a whole montage of Looney Tunes-inspired cartoons going through my head? Think lots of anvils and frying pans.

The whole idea that I was asking for sympathy was like nails on a chalkboard. I'm pretty sure the effort involved in holding my tongue, and coffee pot, did leave me with an odd twitch and a vein pulsating out the front of my forehead. But other than that I was cool as a cucumber.

Anyone who has ever read my blog or spoken to me for more than 3.2 seconds knows how I feel about the whole pity issue. I HATE pity, it sucks out your soul like a big hairy-arsed incubus (or succubus for those of you of the male persuasion). It is disempowering and frames you as a victim. If you are going to give me pity then you might as well just give me a chilli enema or poke me in the eye with that bastard offspring of a fork and spoon, the spork, and why don't you make it rusty while you're at it. To you and your pity, I say a big fat Bite Me!

Now, this isn't to say that I don't hold my own private pity parties every now and then. But its a very exclusive invite list of one, and may involve chocolate, hiding under my blankies and watching bad sci-fi or horror shows (yes I know the geek alert just went off, but until you've watched a shockingly bad sci-fi or horror show you don't know what you've been missing. If you haven't seen The Blob circa 1988 you haven't lived. The horror of Kevin Dillon's (Entourage) hair alone, is worth the effort of tracking it down). My pity parties are all infected with the Cinderella effect, so they are short-lived. After a couple of hours, I wipe the snot off my face, pick up the mounds of soggy tissues and chocolate wrappers, suck it up and move on. 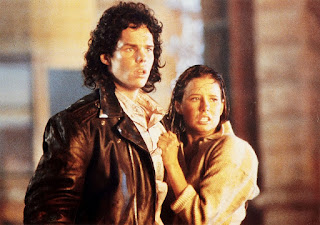 [Image: a coloured still from the movie The Blob (1988). It shows a white man with glorious 80's curly long hair and a leather jacket to the left of the frame, he looks shocked. To the right a white woman with dark hair and wearing a cream top holds onto Matt Dillon looking scared.]


So in case, I haven't been clear:

So once again I am forced to revisit the question of "what does sick look like"?

If I am sick should I look like this?

[Image: a movie still from The Exorcist (1973). A close up of Linda Blairs face after her demonic possession, pale, scary, horror]

(The Exorcist is one of my all-time favourite movies. So happy when Linda Blair was on my favourite horror eye-candy show Supernatural).

Would I then appear legitimately sick? Currently the most I get is a "gee you look tired". Mind you some mornings when Bob is beating the crap out of me I would be grateful to look as well as young Linda. Problem is when I do look sick, I am usually too ill to go out in public. Conversely, if I'm out I'm feeling 'better', by which I mean instead of death warmed up, I feel like that little bit of goop you get in the corner of your eye in the morning, I look okay. I've most likely brushed my hair and put on some BO Basher, no guarantee of the dreaded shower or clean clothes but there's nothing a few squirts of Chanel No. 5 can't cover.

Not looking sick enough can create many problems. Recently a friend sent me a link about a woman who lost her health benefits because she appeared too happy in her FB pictures and therefore was deemed to no longer have Severe Depression. Damn that brain-fogged woman for trying to break through her depression to attempt some sort of life instead of succumbing to the expected levels of overwhelming hopelessness. It's a miracle. One smiley day and Depression is cured. Maybe I should burn all the pictures of me standing up and wear a disguise when I manage to go grocery shopping? Obviously, the trolley of milk and Green & Blacks mean I'm cured, just ignore the puke bag and salt sachets sticking out the top of my handbag.

Damn those invisible illnesses. I couldn't get a good illness where I look like crap, no I'm such a loser I picked dysautonomia. Way to go Michelle!

Now I did think about getting "SICK" tattooed on my forehead, but I am a wuss. I can't even pluck a rogue eyebrow hair or take off a band-aid without screeching like someone is cutting off my leg. So the tattoo plan has gone out the window. I think I need to accessorise. I'm sure that just like the right accessories can make an outfit, the right sick accessories will enable people to easily pick me for the sickie I am.

So what kind of accessories do I need to purchase and where do I get them? Is there an e-store called Sickies R' Us? Do Maybelline or Napoleon put out a line of anti-bronzers to give you the pasty sick tint? Where to start? I decided I'd google "What does sick look like?", in hopes of finding an answer to my problem. Alas, there was no answer to my question. I could find out what a sick fish looks like, or a hamster, but no answer for a sick 36-year-old woman. Just when I had given up hope I had an Oprah light bulb moment. A ray of sunlight fell upon my computer screen and I found the answer in the form of the humble chicken.

Thank you Wiki Answers, once more you have saved my life.

So there you go chicken/human its all a bit the same. Your hen may look pretty on the outside, sexy feathers and all, but look a bit closer and she is just not quite right. 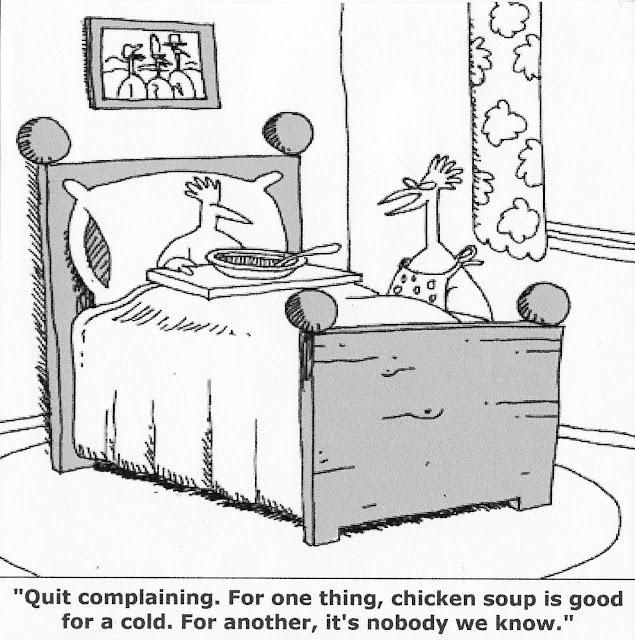 [Image: a black and white cartoon of a chicken sitting in bed with a tray and bowl in from of them. Next to bed, another chicken wearing an apron stands. The text underneath reads: Quit complaining. For one thing, chicken soup is good for a cold. For another, it's nobody we know.]

So if next time you see me and my vent is a bit crusty, you will know with complete certainty that I am sick.

The clucked off Michelle :)

Email ThisBlogThis!Share to TwitterShare to FacebookShare to Pinterest
Labels: But you don't look sick, Chickens, Dysautonomia, Supernatural, The Exorcist