Well, you knew it was coming. There had to be a Christmas post describing the varied delights of the time of good will to all men (and women, and hermaphrodites and transgender, and all those along the continuum). No doubt there will also be an obligatory New Years post, it's a given really. I must admit I do love Christmas. There have been good bits and bad bits, and perhaps most importantly there has been ham.

Christmas has a smell that you can recognise anywhere. It's a mixture of cinnamon, nutmeg, all spice, Grand Marnier, and flustered present buying stress sweat. I love the decorations and the food. The novelty of people actually making an effort to smile and be cheerful. The traditional Christmas Eve movie, National Lampoons Christmas Vacation. You know exactly what is going to happen yet you laugh every time. It's the one time of the year that I really love all the tacky trimmings. At the hospital where I used to work, we would dress up one of the skeletons with tinsel and baubles and he would sit with pride next to the front desk. It wasn't really Christmas until he was sitting out there topped with his Santa hat. No one cares how silly they look with their tinsel wrapped hair and flashing reindeer earrings. Everyone's a child, regardless of whether they are 5 or 95. Joy is in the air and the closest thing to bar humbug are those black and white lollies you buy at the sweet shop. Well at least for the most part.

Pre-Christmas Bob made his presence known. A simple trip to the den of iniquity also known as the Knox shopping centre, was punctuated by frequent trips to the rancid public conveniences to remove all traces of food from my body. I do fear I may have mislaid a liver or at least a kidney down that pungent porcelain but I was not in the mood to search and am willing to live with whatever I have lost. Whilst this does not in and of itself scream Christmas, I did get to experience all this with the joyous tunes of Deck the Halls, Jingle Bells and Joy to the World, screeching out of the tinny speakers in the water stained roof of the bathroom.

Ah the joys of Christmas shopping, the goodwill in the car park, the kindness shown to shop assistants. Oh wait a minute that's bizarro world. This is the worst part of Christmas. The time of year when people feel it is their right to screech like banshees and behave like morally bankrupt, self-centred two-year-olds all in the aim of buying a Wii or a copy of Twilight, to ensure they and only they have the Christmas of their dreams. There was the rude middle-aged woman berating a poor shaking pimple-covered shop assistant who was trying his best to maintain his composure. She ripped the receipt from his hand, screamed over him as he tried to explain and was generally a complete cow. Call me crazy but I don't think that is the best demonstration of Christmas spirit when buying Lego for your grand kids. There were the people swearing at each other in the car park because someone stole someone's car park. I do think the height of Christmas spirit are the thieves who break into people's cars at shopping centres to steal the presents in the boot. Bar Humbug! Thankfully David did the majority of shopping this year or I think I would have been emotionally defeated weeks before the big day. 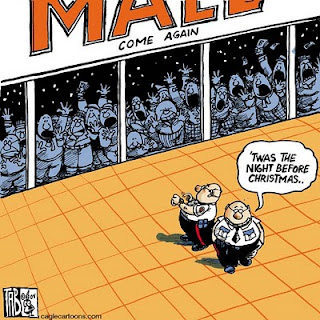 I managed to bake and chop and stir and blitz with minimal damage. Though I will have to admit that my attempts at Turkish Delight ended up more comparable to 1980's version of The Blob than the delicate rosewater delight I was aiming for. It is actually possible to bake away to your hearts content with a nuclear powered air conditioner (sorry global warming but it's Christmas and there must be mince tarts), a chair in front of the oven, bucket loads of salty potato chips and a never ending supply of cold water. Collapsing, vomiting and nanna naps on tiles are optional. No? You don't believe me. Okay compulsory then.

The house managed to get decorated and thanks to the efforts of my industrious mother, the house was cleaned before the invasion of the hordes from the west, I mean the family. They know I love them, I'm just rather comfortable with our quiet and sedentary life. The addition of 7 extra people, including 3 children aged 4, 5, and 6, was like being strapped into one of those astronaut training centrifuges going at about 50 g (note that 3-6 g sustained for more than a few seconds can cause blackouts and death and you kinda get the idea). 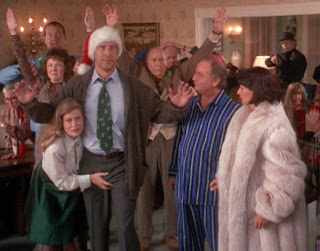 Bob was kept relatively at bay on the big day thanks in part to a promise of gold, my left kidney, a date with a Victoria's Secret Model and my first born son (sorry Thomas, but it's just one of those things). There may have also been some influence from my rash decision to up my meds for the big day, for which I have well and truly been chastised by my very disappointed, zero-tolerance body.

My long thought out decision to wear a sleeveless baby doll top to accommodate for both the traditional Australian Christmas day heat and the obligatory ham and turkey OD was found to have a large flaw. Halfway through the day my eldest was nice enough to point out that if I bent over you could clearly see my mid-30s, 2 children, womanly pancakes. Thereby turning to stone the unlucky viewer. This is not the first time my children have chosen to inform me of my poor fashion sense at an inopportune time. Pre-Christmas my youngest decided to inform me that the maxi-dress I was wearing was completely see through. He had noticed this earlier in the day but decided to burst my blissful bubble of ignorance halfway through our weekly shop at the local supermarket.

I was very impressed with my culinary efforts on the day, so I must brag a little. There was turkey cooked to perfection. Potatoes and pumpkin baked in a bath of chicken stock, herbs, garlic and large globs of butter, which they soaked up and caramelised to gooey goodness. Warm roast duck salad with chilli, lime and general Asiany delights. I forked out for the good ham, and it was good, oh so good. Five days later I am vaguely aware through the haze of my ham induced high that I may be about to OD. A shudder of fear runs through me every time I look at the dwindling leg sitting in my fridge. Deep down I know that each slice brings me closer to the inevitable time when this pink salty nirvana will be over and the withdrawal will begin. Yet I continue to chase the porcine dragon with wilful abandon. There were other gastronomic delights, babaganoush, macadamias roasted with rosemary and sea salt, triple cream brie, smoked salmon and capers, but none truly compare to the Babe version of china white wrapped lovingly in its vinegar soaked ham bag. 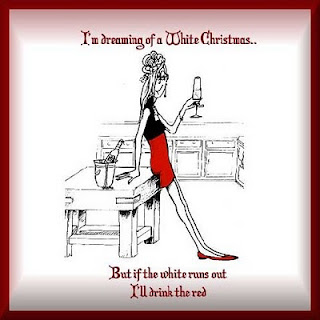 I managed to have a glass of champagne, scored with the presents and overall the day went pretty well. No family feuds erupted and the kids didn't fight, scream or cry despite the ingestion of copious amounts of sugar. The good crystal survived the day, the dogs didn't attack the children despite repeated poking and even the teenager managed to speak in full sentences rather than the normal grunts. There was genuine laughter and smiles throughout the day and even after about 10 hours of family bonding we were truly disappointed that the day was over. If that's not a Christmas miracle I don't know what is. 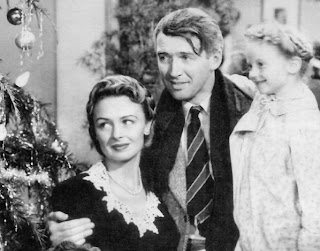 So there you go that was Christmas for this year and we all managed to survive. The aftermath wasn't pretty but that's always the case, Bob or no Bob.

So I hope everyone had a Merry Christmas.

OK that's it I'm off to nourish my ham addiction.