Happy New Years Eve (And An End To Onychocryptosis).

Today is a special day. Not because it is New Years Eve. Not because it is both the end of the year and the end of a decade. (Two for the price of one, I do like that). Not because of all the magical possibilities that are contained in the as yet unwritten year ahead. No. These events pale into insignificance to the true meaning of Dec 31st. What? You don't know? Of course you do. We have waited 365 long days, but it is finally here. Today is the big day. Today is the day of the release of the New Years Eve, Year in Review Lists (NYEYRL). YAY!

NYEYRL is the day we all wait for (you know you do). From the time the clock ticks over to 12.01am on January 1st, we long to know what will make the many and varied Top 10 lists in the year ahead. A day when we celebrate the magnificence of list making in all its glory, by creating our own listy offerings in the form of our New Years Resolutions. The day when we sit down with the newspaper to read page after page of vital lists, accessorised with a mix of pictures of various celebrities and nefarious characters who rose to prominence over the past 12 months. What will be the Top 10 Best Films of the Year? (Please, please, let it not be Twilight. I'm sorry but people over the age of 17 who class themselves as either Team Edward or Team Jacob, should not be allowed to breed. Under that I can understand. I watched The Lost Boys a bazillion times as a teenager). What were the Top 10 Celebrity Scandals of the Year? Will the reality and underwear challenged Brittany Spears take the top spot? Or will anti-soap campaigner Lindsay Lohan take the crown? Who will win the coveted number one spot on the highly influential, Top 10 Pan Pipe Solos of the Year list? Will it be Plegma Nork of Norway or Ptorkie "Pete" Petrovski of the Ukraine? List after glorious list. Where would we be without these magical lists of knowledge. Thank you anonymous list maker of wisdom, for clarifying what I should think about the year soon to pass.

Who creates these tomes of enlightenment, without which we would be left adrift in the sea of best-less ignorance. What would the job advertisement look like?

Applicant must believe that they and they alone are the most qualified person to judge best in show for every category known to man. Applicants must display tertiary qualifications in E!, (experience with E! online also accepted). Demonstrated knowledge of Entertainment Tonight and a love of all things Kardashian and Lamas a must. Ability to count from 1 to 10 desirable, but demonstrated abilities in the use of Word bullet point list maker also accepted. Applicants afflicted with mind numbing stupidity as demonstrated by the ability to quote The Simple Life seasons 1-5, welcomed.

I can think of a few potential applicants.

At this time of year no section of society can resist the temptation to celebrate NYEYRL by creating their own listy vision. This week I was emailed Top Medical News of 2009, courtesy of Medscape CME (yes I subscribe, don't judge my lack of a life). These doyens of the medical world put together an impressive list of medical advancements that have occurred over the last year.

It begins impressively with, New Test May Detect Early Alzheimer's Disease. Understandably an important advancement. Now we can find out if our future selves are going to permanently scar our teenage nephew by mistaking him for our childhood boyfriend and going the grope with our arthritic, Bengay covered hands, all whilst we can still appreciate the ickiness of the situation.

This was followed by, Single Screening Question May Accurately Identify Unhealthy Alcohol Use. What could that be? Miss X, "Have you ever woken up to discover the Kelvin Klein underwear model you took home last night has transformed into a troll man who keeps calling you Lt. Uhura and has questionable body odour?" Mr B, Have you ever thought that the tepid kebab served to you at 4am by some sweaty, swarthy, soap-challenged gentleman, was the best thing you have ever eaten? A yes to either question would suggest a need for at least an AA pamphlet.

Further along we are suitably impressed by, CDC Issues Guidelines for Early Empiric Antiviral Treatment in Persons With Suspected Influenza. Always a good thing in this time of porcine bio-warfare. I always knew pigs were evil (have you read Animal Farm?). First it was ham causing cancer and bacon blocking our arteries, now it is swine flu. Obviously the pigs of the world have had it with us making fun of their curly little tails and are bent on world domination. Revenge is a dish best served with a side of bacon.

And then a headline caught my eye:

Yes that's right. The management of the humble ingrown toenail was a top 10 medical news story for 2009. No story about cancer vaccines. No news about the development of a bionic eye. No no. It is the humble ingrown toenail that is up there as a shining beacon of man's ability to take on and master the plagues of humanity. Apparently, we should all rejoice in these exciting developments in halluxial health. I did find out that the official name for an ingrown toenail is onychocryptosis, so that's something. But I continue to wonder how this made it to a top 10 list? Maybe Medscape's list-maker, Barry, had a bad case of onychocryptosis and was really impressed with the new anti-fungal cream prescribed by his doctor? Maybe Barry has a toe fetish, Sarah Ferguson style? We will never know and it will remain a mystery for the ages.

Who needs to spend hours creating their own tribute to NYEYRL, when such well researched and throughout examples of list excellence already exist. My resolution for this year is to not write any New Years Eve Year in Review Lists, or lists of any sort, except for my shopping list which I shall endeavour to lose or leave at home not realising until I am standing in the middle of the supermarket with my rickety trolley, swearing like a mad woman under my breath.

Happy New Year dear readers. Wishing you all a year free of onychocryptosis. 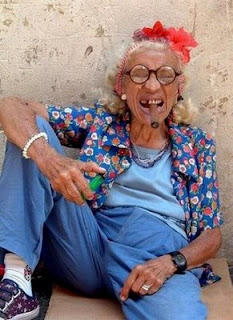 The List-less Michelle :)
Posted by Michelle Roger at 13:10

Email ThisBlogThis!Share to TwitterShare to FacebookShare to Pinterest
Labels: Dysautonomia