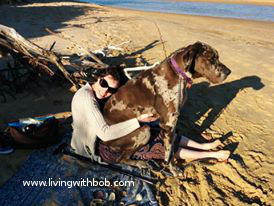 [Image: A large merle Great Dane, sits on the lap, or perhaps squishes the legs of a woman with dark hair. The woman in a cream cardigan and sitting on a blue and white patterned throw, is cuddling the displeased Great Dane. They are at a beach with big scary waves. They are sitting on sand near a peace of drift wood and a small creek winds it's way out to see in the top right corner.  This is one of my favourite photos of Freyja. She's always been a lap dog and very protective. Though in this case I'm not sure if she was protecting me from others on the beach or seeking protection from the big evil waves.]

I want guarantees. No, scratch that. I need guarantees. I need to know Option A will lead to Outcome B. One hundred percent. No deviations. No messy odds that allow for Outcome C, D and Z to come into play. I am a tantruming two-year-old demanding my due. I want it and I want it now. Rational thought sweeps in and out to be replaced by panic and screams that it's not fair. And it's not. Even when rational me says it's part of life, emotional me is still in the foetal position. The decision's too big. It's all too quick. But still it must be made.

She doesn't care. She sleeps on her brown and tan couch as warm Winter sun streams in through the angled blinds. Blinds that hold a layer of slobber. A layer of oil from nose presses and fur. Light comes through the window whose pane is patterned with overlapping nose prints. The top line of which mark her height as clearly as any notch or biro line on a door frame. No matter how often I clean, her presence is announced from front door to back, in oils, slobber and fur.

Half wrapped in her blanket, legs tucked under pillows she twists awkwardly to look as I emerge from my bedroom. A morning tail wag thumping heavily on the cushion gives rhythm to her excitement. The tangle of limbs uncurl. She flops to the end of the couch in her usual half-stretch half-stand that seems more attributable to an initial emerging from three months hibernation instead of 12 hours over night.

A warm head moves expertly into position. My hand encloses the top and side of her warm head. Eight years of mornings have made the movement automatic. The coffee machine splutters into life and the crack of the container that holds her breakfast leads to the first signs of excitement. Food, her family coming home after an eternity (otherwise known as any period spent outside the front door) and the occasional pounce at the chicken run to watch them squawk and flutter, her main sources of excitement. A rattle of her lead or her desire to let people, other dogs, birds, the crow that likes to sit on the front gutter, or the occasional unidentifiable sound, know that they have entered her domain, the others.

She stops at the door quivering. Bowing, before a stretch elongates her body and she yawn-yelps to calm herself. She waits for me to head through, before a burst of excitement zooms around my right hip and heads to her silver bowl. She's looking great the vet said. Could even lose a kilo or two. Yet the lump of meat is inhaled as if we have starved her for weeks. Suck down the food, quick ablutions and a check that the boundaries are secure, before waiting on the door step to return inside. That's where her family is. Or, more importantly, that's where her couch resides.

Cocooned in the corner of the loungeroom. Soft circular couch. Warm Winter sun. A throne to gaze at both family and the world. Content and unaware.

I want to know we are making the right decision. We had three. One, do nothing, was discarded immediately. The other two are filled with uncertainty that leaves me sleepless and nauseous. The stress of such big, irreversible decisions do not meld well with a chronically ill body. It's all been too quick. Monday just a double check with the vet. Tuesday the bad news. The big bad. The one that left me crying on the phone to the vet, and Mr Grumpy, on the couch, in my bedroom. Wednesday rapid decisions. Friday, tomorrow, surgery.

On Monday when the vet, with her keen eye and calm voice mentioned possibilities, I never entertained it'd be the worst one. It was supposed to be nothing. Benign I was prepared for.  This. This had been locked away in a place where I'd never find it. This was the sucker punch delivered with a calm, sympathetic voice on the other end of the phone. Bad news evident from the first syllable. From the too early phone call. Monday's "it often comes back unclear" replaced by the removal of any doubt and the clarity of the expert eye. "Aggressive," "high grade," "no clear margins," the hole in my stomach growing deeper and wider with each word.

I knew I loved her. I knew but I didn't know how deep it ran. I didn't know how deeply she'd wound her way into my being. I sit watching her sleep and try to catch a glimpse of  the invisible filaments that bind my heart to the smelly, snoring body opposite. They remain elusive to my eye but are crystal clear in the pain that potential loss creates. So big decisions are made.

It'll give her the best chance. Best chance. Such a pathetic pairing of words. I don't want chance, not even the best one. I want certainty. I want a promise. I want it written in stone. I want to know that when it's all done she'll be back sneaking her head into my hand. That I'll feel the weight of her body pressed against me as I try to hang the washing. That she'll worm her way back into my lap when I sit outside. That she'll still annoy the chickens and and bark at the delivery woman before poking her head between my leg and door frame for a pat and a scratch. That she'll continue to ruin my good clothes with fur and slobber. That she will announce her displeasure at my being out or not getting up early enough, by disembowelling a tissue, or placing items from my handbag outside my bedroom door.

I want to know she'll be okay. I want her to tell me that it's the right decision.

I'm not ready to let those filaments go.

Tomorrow she goes in for surgery and they'll take her right front leg. The leg she holds up to shake hands. The leg she whacks me with when she wants my attention. The leg she touches me with just to make sure I'm still there. Her best chance they tell me. Best maybe. But shit chance, shit option, shitty best chance of all the options. I look at the still growing lump protruding above her ankle, the one that is growing rapidly and now so tender she's not happy even for me to touch. I look at it and know it must be done, even with potential complications, even with the shitty nature that is her best chance. Even if we don't have time to breath between news and decision.

But for today, there'll be cuddles and belly rubs. She'll be my other walking stick as I move around the backyard. She'll give me side-eye when I cuddle one of the chooks, and bark at the workmen across the road. She'll be excited when Mr Grumpy gets home and when the youngest returns after his long trip to the mail box at the end of the driveway. Today I'll pretend and she'll remain oblivious.

Tomorrow we'll trust to the experts. Keep positive thoughts even if at present they are tinged with fear and worry. I'll start breathing again after.

I love my snotty, furry, leaning shadow.
I love the feel of her warm head in my hand
Her weight on my hip
Her continuing belief that she is a lap dog

Even the snot and fur that have been deposited on and in the laptop on which I type.

Michelle
Posted by Michelle Roger at 13:21