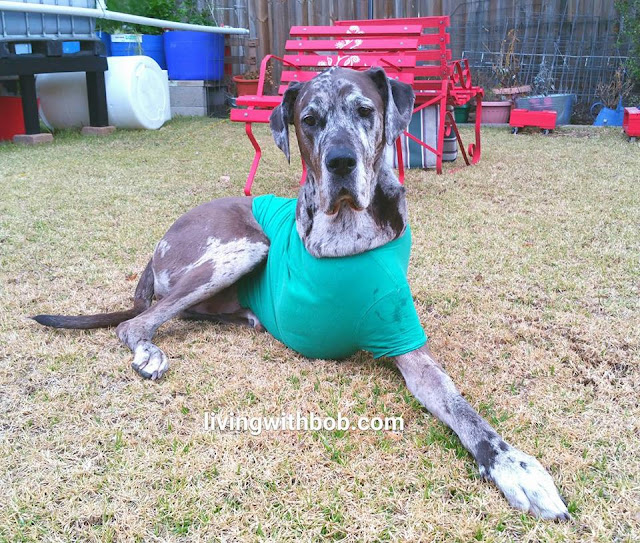 [Update: a merle Great Dane sits on frost burnt grass. She is wear a green t-shirt and has only one front leg. Behind her is a red garden chair and garden pots and plants. She looks alert but over it. Out of everything my old green t-shirt has been the best thing to cover her wounds and stop bandages from moving.]

This post is the follow up to my last (Filaments) which was the lead up to her surgery.


"Freyja's temperature is always low, so this represents a fever for her."

What is it about vets that they instinctively trust the animal and the readings before them? Try to explain something similar to a medical practitioner and you can see the internal eye roll before they hustle you out the door ignored and untreated. So many Dysautonomia patients often have internal thermostats set outside normal parameters. After years stuck at 38C my body now frequently inhabits the region of 35.2- 35.5C. A couple of my regular doctors believe me, but even as I described back when I was getting regular saline IV's, a nurse despite multiple forms of assessment refused to believe her instruments, or me. Mind you even when I told my pacemaker surgeon that I don't process sedation or local anaesthetics properly, it wasn't until I continually woke up mid procedure and in pain, that I was believed. And yet for Fryeja's vet it's not a stress. She simply believes and believes in, her patients.

It does give me confidence. Not all vets do well with giant breeds. I've seen towering men baulk at touching both Freyja and when he was still with us, Thor. Giant breeds always attract comments about their size ("You should put a saddle on that!"), and it can be off-putting, belying a gentle nature and a breed that still considers itself a lap dog. But practicalities of treating a large animal aside the vet is at ease and just gets on with the job. She walks in comforting and confident and Freyja just goes with the flow. And in turn I feel confident and comforted. I am grateful for that. We go back in today. Maybe I can convince her to give me a litre of fluids and a cortisone shot in my bursitis inflamed hip, when she's done with Freyja's stitches. There definitely seems to be a lot more practicality and in many ways compassion, in veterinary medicine that has been lost in human medicine where all too often the patient is seen as less than, an inconvenience, or even at times the enemy.

It's been two weeks since her surgery, nearly three from the time we walked in ignorant and free from the worry and stress that has permeated so much of days since. And I am tired.

So so tired. But we're getting there.

It's been a rough few weeks and chronically ill bodies don't tend to react well to stress. Life hasn't stopped so we could focus on the one stressful issue. Instead it kept throwing things our way including the sudden loss of my uncle. He was a tough guy. Three bouts of cancer, a heart attack, broken bones and a 70s rock and roll lifestyle that he never really shook. He was a guy who always lived life by his own rules and never mellowed with age. And sitting in front of his casket and listening to his singing and bass playing, quintessential Oz Rock, it felt and continues to feel unreal. And I am still processing. But we're getting there.

I keep reminding myself.
Slow and steady wins the race, right?

Standing in the vet's consulting room going through the procedure for the surgery I was simultaneously trying not to throw up from worry and fighting back tears at the prospect of what lay ahead for her. She didn't know. We were leaving her with strangers to have a life changing operation. We couldn't explain to her. Sucking up the responsibilities of pet ownership is tough when it comes to decisions like these. Realising how much you love the trusting, furry, stink ball in front of you at the same time as you have to watch her go out through the door after signing the paperwork, is even tougher.

Perceptions of time vary depending on the circumstances in which we are living and the stress of waiting for the phone call felt like an eternity. When the vet finally called it was late. It went longer than expected. She did really well. The scans were clear and the procedure straight forward except for the complications of her size.Would we mind if she went home and had dinner before we came in to see her? Of course. Well not really. Emotional brain wanted to scream no and run straight to the clinic and break down the door. While logical brain knew it was already 7pm, that the vet was also on call and working hideously long hours over an incredibly long working week. We could wait, Freyja could wait, and perhaps more importantly, the vet could go home, see her family and have a breather before the emergency after hours consults started to roll in.

Thankfully calm and rational Mr Grumpy was in charge of phone calls on the day.

8:30 pm Freyja was tucked up under a blanket surrounded by hot water bottles and blissfully unaware thanks to the slow steady drip of morphine into her veins. The relief of seeing her was overwhelming. To touch her paw and stroke her muzzle. To have that tangible connection. Then and only then did the vets words seem to take on form. It went well. She was okay. She was in good hands. I went home exhausted but slightly less anxious. Slightly.

Great Danes aren't supposed to be in tiny country vet clinics. Her 58kgs and long limbs meant only just fitting on the fully extended operating table and a room all to herself for recovery. Similarly the next day she was perched on blankets in the middle of the main surgery room. Allowing her company and after a quick look around at the other inhabitants, clear acknowledgement that her bulk would not fit into even the largest of their cages. A small excited whine, thumping tail and waves of relief. Who knew you could be so excited to hear your dog had peed? Who knew as I write nearly two weeks since the surgery, seeing her pee and poo would continue to excite me. This is much of what the last to weeks have involved.

Bringing her home has been both nerve wracking and a relief. I have slept on the couch next to her and also jumped out of bed when I've heard her cry out or stumbling around in the lounge. I watch her and clean up after her. We've wrapped meter upon meter of bandages around her torso. And my bum and legs have gone numb from sitting on the floor next to her bed. I am continuously covered in her hair and slobber. And changing her blankets sometimes multiple times a day due to incontinence. I am tired. She is tired.

But we're getting there.

Every unsteady pee and poo is celebrated. Ever hop/step applauded.
Every moment of discomfort soothed. Ever stress comforted.

She lays before me in the loungeroom in one of my green t-shirts trying to keep a dressing on her infected drain. We continue to ply her with antibiotics and cuddles and take calls from our vet checking on her progress. She is quieter than normal. In our multiple trips to the vet since the surgery her nervous energy, especially in the presence of other dogs, is gone. I don't know if she's more settled or more over it. Only time will tell. Today we go in again to check the infection and hopefully remove the stitches from the two large wounds that occupy the space left from her now amputated shoulder and leg.

"All I want is to do is go inside and rest and this annoying woman keeps trying to make me walk." * * Freyja is still not feeling great and pretty meh about the world but we have to keep her up and moving if only in short bursts with much rest in between. It's all a bit slowly slowly but we're getting there. Hopefully the antibiotics are kicking the infection in the wound and she'll pick up again soon. We're both tired but hopeful. She's been my companion for 8 1/2 of the last 11 years I've been ill so I just want my energetic, slobbery pup back. * * [Image: a short video of Freyja a merle great dane wearing a green t-shirt walking a little in the back yard on our Winter frost burnt grass. More a hop walk as she continues to learn how to get around on three legs. At the end she flops tired to ground to look longingly at the back door where her warm bed resides.] * * #greatdane #merle #ilovemygreatdane #tshirt #amputeedog #recovery #tired #exhausted
A post shared by Michelle Roger (@michelle_roger) on Aug 8, 2017 at 12:23am PDT

Thank you to everyone who has sent me and Freyja lovely messages. I keep thinking I'll catch up with them but I realise now it's unlikely. I have read them all but the fatigue and stress has meant all my spare energy has been focused on taking care of her. If you want to keep up to date with how she goes I'll be updating over on Instagram.
Posted by Michelle Roger at 12:29