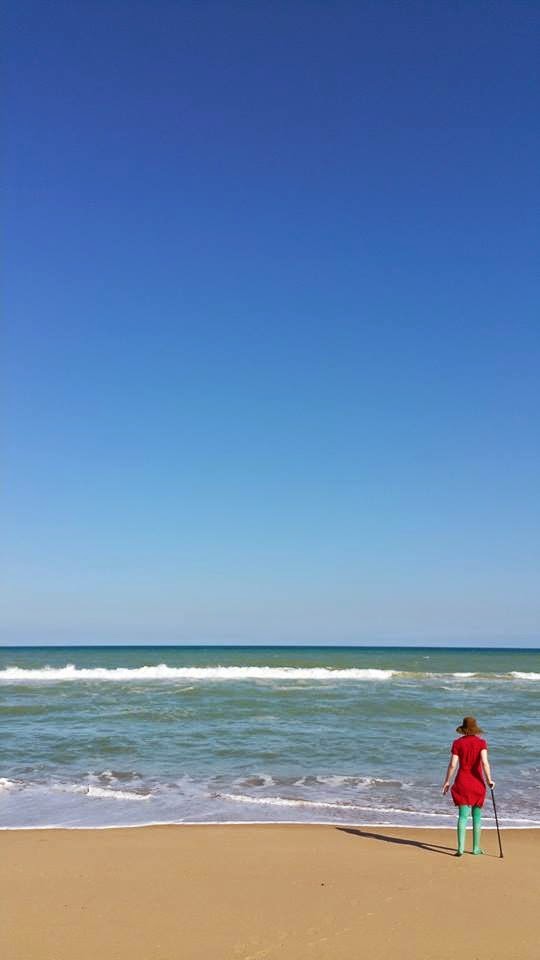 A couple of weeks ago I sat in a cafe with Mr Grumpy and ate a croissant. It was toasted and stuffed with cheese and ham. Delicious, but not allowed. Everything in it was on my No list, but I had it anyway. A moments pathetic, although rather tasty, defiance. Mr Grumpy just looked at me when I said what I wanted and we sat in silence as I ate. He was well aware that I was not in the mood for conversation. And I was beyond even attempting a pretence of civility. It wasn't him or my dietary restrictions. I was just beyond over things. Another scan, another wait. All after another disappointing specialist appointment. I was just tired. Being ill is exhausting. Being chronically ill is a continual state of exhaustion that reaches beyond the physical.

I am in a bit of a holding pattern at present. I continue to be ill. I continue to deteriorate. I continue to have no real clue as to why. Apart from my original medication and my pacemaker I have had little in the way of concrete wins. I am luckier than many others in that I have belief on my side. My doctors believe that I am unwell. Before becoming ill I had no true understanding of just what power that holds. For many in similar situations no one believes them. There doctors palm them off as having some nebulous form of mental illness and go no further. I at least have doctors who acknowledge I am unwell and there is a cause somewhere. Just what that cause may be, continues to remains elusive. A hint here or a hint there, but none of the pieces fully fit. I listen to the words at each appointment, "It's looking more CNS related" before I am sent on my way. I am monitored far more than I am treated. And get to shell out both cash and limited energy for the privilege.

I am at the point where lots of little symptoms crop up. In isolation they are easy to deal with. Combined, it is exhausting and I feel I am once more at the plate spinning stage. Trying to maintain my game face when confronted with it on a daily basis becomes a chore. I flitter around doing small meaningless tasks. Some I complete. Some I don't. The things I love like writing, are harder as my body strives simply to move forward, let alone trying to also string words together. Even the flippancy of social media is trying and beyond me. I float on the periphery of the superficial and the real worlds. But am simply too tired to engage.

Last night the pain in my abdomen became so severe I dropped to the floor as my bp plummeted in response. Only to lie curled in child's pose on the carpet while my family had dinner and Mr Grumpy waited for me to be ready to accept his steadying hands to move. I lay there breathing through the worst of the pain, eyeing the dog fur on the carpet and feeling miserable. Not just the pain and the joy of breathing in dog dander, but the knowing that at present my doctors are either unconcerned or have run out of ideas. This is how so many exist and I can't help but wonder at the hidden populations who live just like me everyday. On the odd time I come clean and lay it out for my doctors they are horrified and I am showered with pity. Then sent on my way with nothing resolved. My parallel universe of illness intersects with the regular world in jagged moments before diverging again and again.

Some days I want to simply crawl out of my skin. I want to shout at the injustice. But mostly I lie defeated and tried. So so tried. The weakness in my muscles spikes at times and I can't lift myself. I wake in the morning and my face muscles refuse to move as I want. My gait is disjointed and I lurch from wall to door frame to bench to couch. Wait for the meds. Wait for my body. Wait. Mornings a waste. A small respite in the afternoon. An evening of exhaustion. Times like these it is hard to keep the wolves at bay. Especially when I know tomorrow will be the same.

I exist in a medical purgatory. Never quite breaking free. Just trying to make it through. Periodically the planets align and I can function for a while. I can get up and potter. Do things I enjoy rather than focussing every shred of energy in simply existing. But I work for it. As hard as any job. I work on it every single day. Existing is a 24 hour, 7 day a week endeavour. And I've been on the job without a RDO for what is now more than 8 years. Walk a day in my shoes. How I hate that phrase. A day is a doddle. There's a special burden that comes from time. From months and years of unrelenting illness. Some days I can push it to the back of my mind. But of late the stagnation in my treatment options lends itself to a sense of suffocation.

I withdraw into myself. A defence mechanism I have employed since childhood. I withdraw and put up the barricades. Part of me wants to hide but part of me still wants to hold onto a tangible link to the outside. I put out feelers into the world before retreat is sounded again. Too much. Too soon. Every sound. Every contact. Too much. Strained nerves make me irritable. I snap and then beat myself up for the snap. My irritation peaks and I become directionless. So the shutters come down and I stew in a swamp of amorphous displeasure and irritation at life. Until something in the back of my mind tells me to kick my feet and wave my hands for help. Both my own and from others.

After I'd finished my croissant I asked Mr Grumpy if we could just go sit by the lake for a while. I needed the air, the trees, the sound of the water and the birds. I needed to be anywhere but where I was right at that moment. Claustrophobia courtesy of simply being in the world. The sounds, the space, the people and the noise. Noise in my head and noise in my being. He suggested the beach instead. So we went home gathered some towels, our youngest and Freyja and set off. Each kilometre and each tree wiped away a layer of burden. Bit by bit open paddocks and bushland took another slice of the exhaustion. I watched as the red gums changed to scrub and twisted banksia and lush flood plain to sandy soils. And finally sand dunes and salt scrub. The long blue/grey stretch of the Bass Strait meeting the clear blue skies overhead. 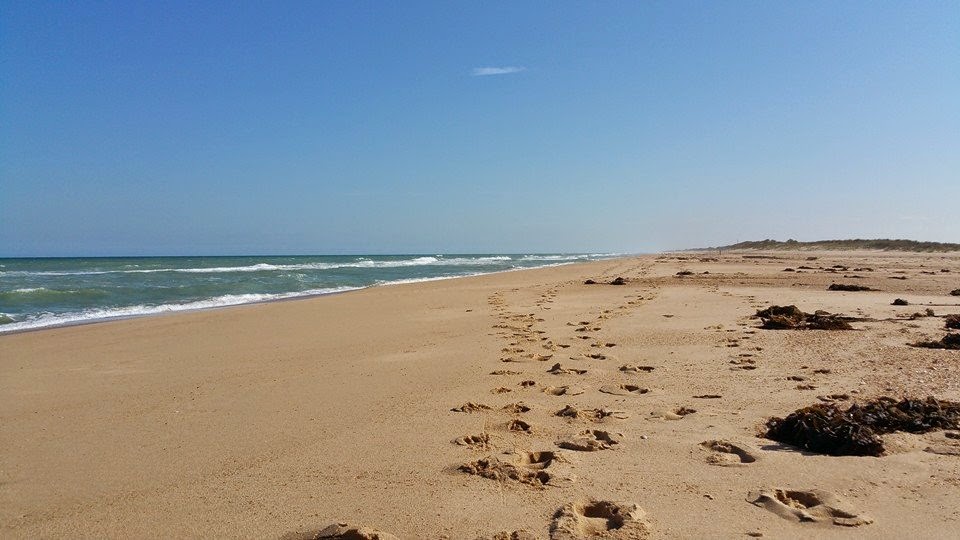 Near empty beach. The sound of waves on the shore. The smell of salt and the detritus of the sea strewn across the sand bar. Warm sands and gull calls. I stood in the water and let the waves wash over my feet. Sinking deeper in the sands. I stood there until I could stand no more. Only then was I happy to ask for help and a steadying arm to get me back to our encampment higher up the beach. Only then did I feel the tightening in my chest and head decrease. Only then did I feel I could unbend my shoulders and breathe. 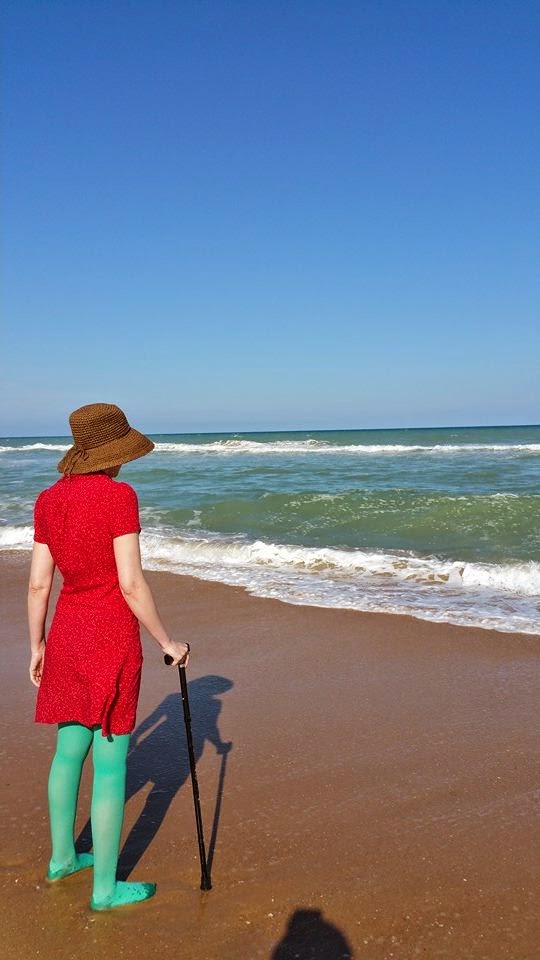 He knows me well that husband of mine. And he tends my wounds with a precision built of years and tenderness. Wash my wounds with salty water and lay them bare to clean winds and the last rays of the sun. 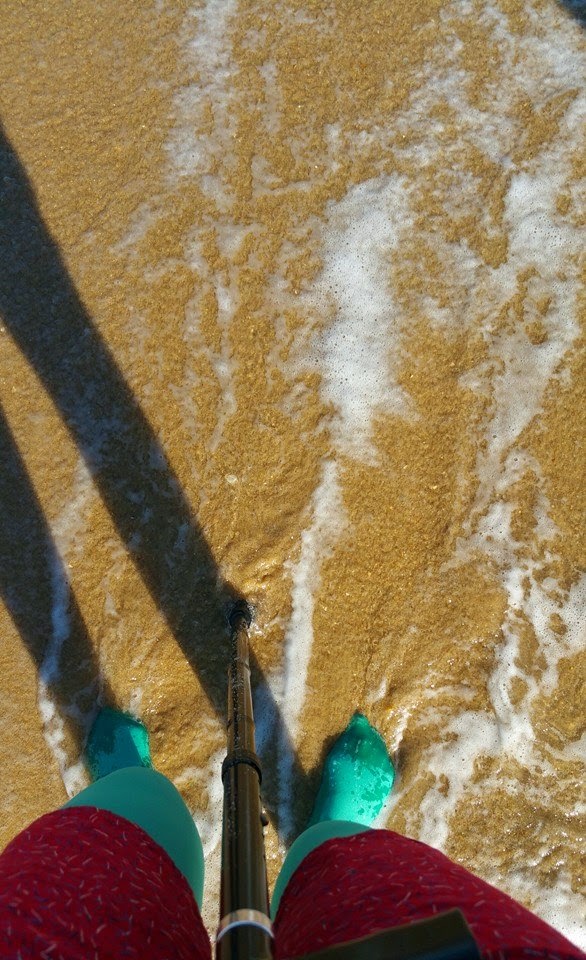 I am so tired of being ill. But for now, my salt and sand-filled stockings and the new additions to my shell collection give me respite. I run my hand over the sea-smoothed skin of the drift wood we brought home and knock more sand out of the line of holes at the base of my walking stick. Remnants and reminders. 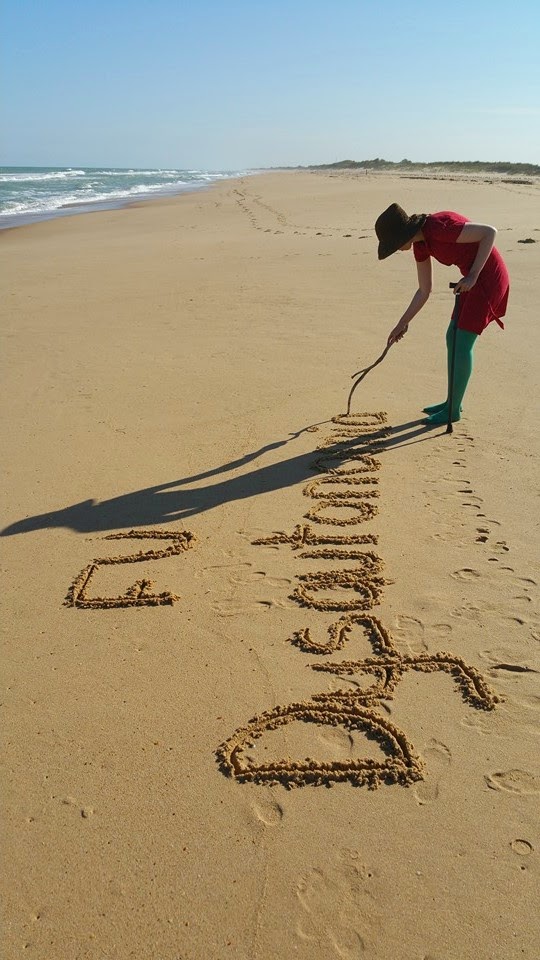 Now I can pick up and go again.

I love this song (well 99% of her songs) from PJ Harvey. All about losing your way and getting overwhelmed and finding your way back.