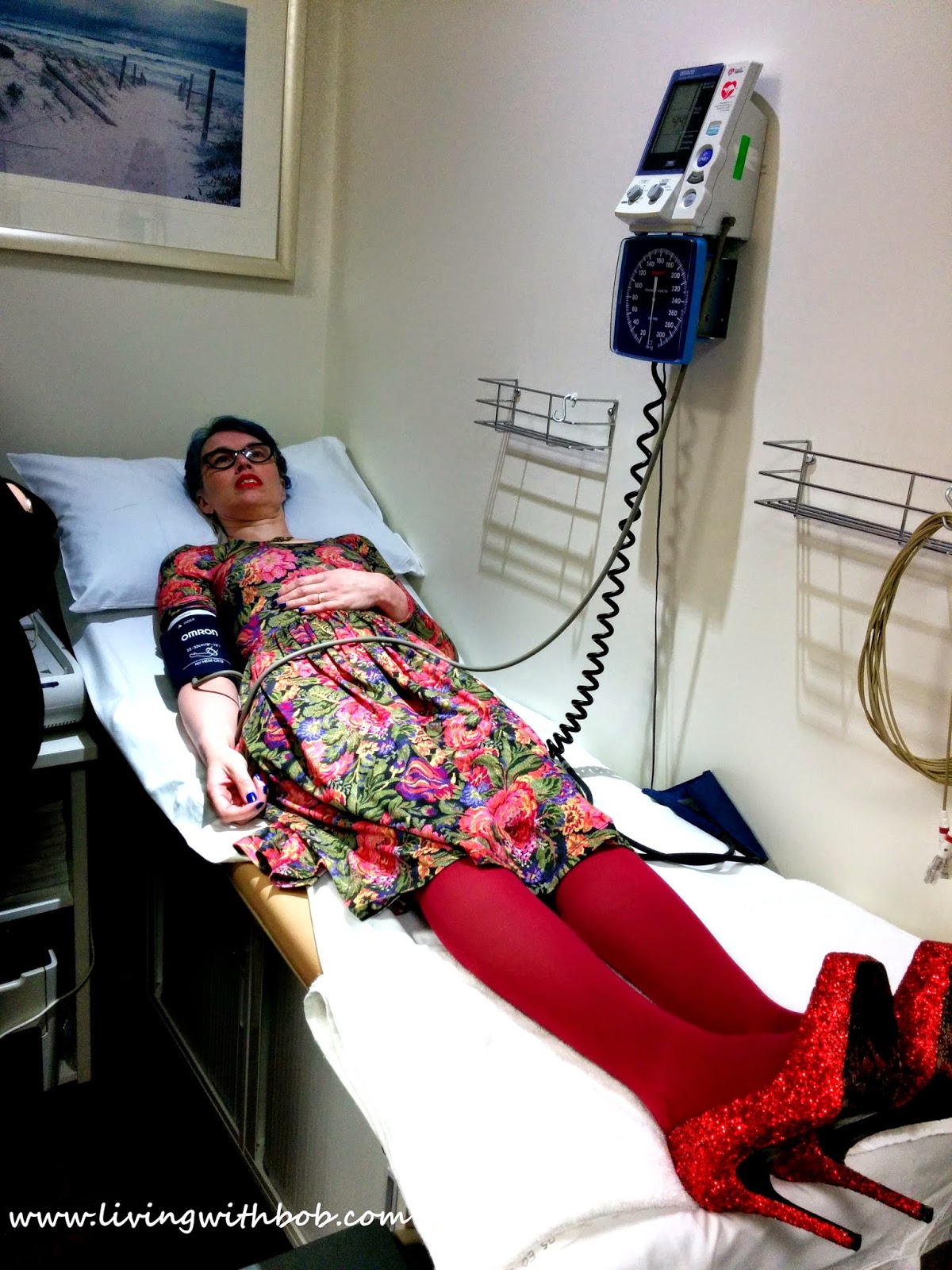 (Yep blue hair, fabulous frock, bright red compression stockings and sparkly red heels for a pacemaker and cardiology check, I may be a fan of  #Hospitalglam)

I've been stewing over the reaction to #hospitalglam for about a week now. Comments have ranged from supportive to outright rude. And it is the later that have really gotten to me. Both the unwell and the well have slammed the concept. And whilst I must say I am not surprised by the comments of the healthy, I am disappointed by many of the comments from fellow patients condemning her for making their lives harder, or doubting the veracity of her health issues.

For the uninitiated #hospitalglam is the creation of Karolyn Gehrig and can be found on Tumblr, Instagram and Twitter. Gehrig was diagnosed with a form of Ehlers Danlos Syndrome (EDS) and like many of us with chronic illness, is a frequent flyer in the medical system. She wears funky clothes (I have serious dress envy over her pill dress) and poses for the camera in an array of hospital and clinic settings. Many have followed her example, posting various selfies of their own glammed up medical experiences, adding them to the hashtag. The concept came to light recently in mainstream media and the discussions around it have been interesting, and at times infuriating, to follow (why I read comment sections I'll never know. It's a bit like picking a scab until it bleeds. Or watching QandA.) The issues surrounding the accuracy of the information relating to EDS is an issue for another post, but I will say, journalists pick up your game. It's not that hard to find accurate information about this collection of disorders.

When you become a patient autonomy takes a hit. The very nature of disease and injury mean you are reliant on another, a doctor, to direct certain aspects of your life. You are reliant on the expert knowledge of treating teams to direct aspects of treatment and allow access to certain medications. Part of being on top of your disorders necessitates regular reviews and things like blood tests. You must, to a certain extent, suck it up, (as my your control freak nature screams in protest.)

You must accede control to a medical system which trundles on oblivious to your personal needs and desires. The hospital PA doesn't care that you want treatment yesterday rather than waiting for six months. Hospitals feel more production line, than houses of healing as time poor staff are forced to minister to an ever growing multitude. You must tell your story a bazillion times to every medical or allied health professional. You must play the game to a large extent, to have access to care.

The clinical nature of medicine both in the hospital or regular clinic is frequently cold and impersonal. You have to wear backless gowns and bear your body to strangers. You have to lie there while you are pushed and pulled, spoken about rather than too. As much as you pride yourself on being able to self-advocate, and some like myself are lucky to have a husband who is a strong advocate for my care, there are times where you are blocked. A doctor can turn around and say no to a treatment and given the rarity of my presentation, I know I am limited to where else I can go. Choice is a lovely word, but when it is spoken about in the context of health, it negates the realities of issues like geography, finances, availability, and rare illness.

Control is an illusion and when you are thrust into the medical system, particularly as a chronic or long term patient you are slapped in the face with this reality. It's easy to despair. It's easy to feel beaten down and hopeless. It's easy to lose yourself to illness and the world that surrounds it. How we find our way out is complex. The paths we take and modes we employ differ greatly. And we arrive at that place at different times. But if we are to not simply exist but thrive, we must find a way to reclaim control, and our sense of self, however that may look.

#Hospitalglam is one method of taking back control. And one I relate to strongly (Anyone who followed my Clicking My Heels for Dysautonomia fundraising last year, or follow on FB, will understand why I am a fan of the #hospitalglam concept.) But it is not the only one. Gehrig is not telling people what they should do. She is not telling people they must take her path. She is sharing what works for her and the large following she has garnered suggests that there are many people who can relate to her, and her mode of rebellion/control.

I have seen headlines talking about #Hospitalglam, taking the “ugly” out of illness, or removing the “shame.” Neither word deserve a place in the illness narrative, and their use misses the point of the hashtag. There is no shame in illness. It is simply something that occurs as part of life. It doesn't matter how good a person you are or how well you eat or exercise, illness can still come calling. No one wants illness, we don't actively seek it. Nor do we do things to prolong it. “Shame” is closely linked with blame, and if you have been ill for any length of time there will be someone who tells you how you are to blame for you continuing malady, be it your diet, lack of appropriate religiosity, lack of kitten cuddling or refusal to see their favourite swami or eat 85kgs of [insert super food of choice] each day.

We are continuously fed a lie both in the community and through the media that illness is shameful and ugly. Just to clarify NO ITS NOT. “Shame” and “Ugly” are judgement statements. Why should we be judged or internalise such a view, for something that is out of our control? So not only do I have to deal with a debilitating illness but now I must also feel ugly and ashamed in the process? I say F**k that!. Yes there is pain. Yes there is vomiting. Yes we fall over. Yes we require medical aides. We are cut and sampled. Swathed in bandages and stitches. We may need feeding tubes or colostomy bags. Gain excessive amounts of weight due to hormones or treatments, or end up little more than bones in a skin bag due to malabsorption and paralysed stomachs. Our mobility, speech, thinking etc may be impaired. We may be depressed, anxious, dealing with bipolar disorder or schizophrenia. But none of that is shameful or ugly. They are merely the cards we are dealt. To equate illness in any context with shame or ugliness is insulting. And perpetuates damaging stigmas. Again, I say to the media, pick up your game.

In #hospitalglam many see an alternative to the paralysing and disempowering pity narratives of illness. They see an “up yours” to illness and a system both medical and societal that says to be ill you must conform to a certain paradigm. You are either pity worthy or inspirational. But in neither case can you win. There will always be someone to tell you, you are doing it wrong. The classic “you don't look sick” in all it's forms is thrown at those who wish to frock up or pop on some lippy (if only putting on my heels cured my broken genetics). Alternatively, if you stay in your pjs and trackie dacks you are becoming your illness and need to pull yourself up by your bootstraps. Damned if you do and damned if you don't. And these are the themes peppering the comment sections of articles about the hashtag.

Gehrig is not telling anyone what they should or shouldn't do. She is expressing herself in a way that works for her. The media interpretation of #hospitalglam has missed so much of it's intrinsic value. Her behaviour is not unique (though it can't be framed as an inspiration narrative by the media unless it is seen as an abnormality), many frock up in hospital and at medical appointments, but hers has been a more public and organised expression. Given her background in performance art it is not surprising that this is what works for her. But the way she and others have chosen to express their experience is so anathema to the wider societal views on illness that it has been held up as more of the inspiration porn of which the media is so fond. Just like those dealing with disability, the expectations of those with chronic illness are so low, any achievement is seen as miraculous. We are taught that such life events are the end of the world, so many are unable to conceive of a life filled with joy or fabulous frocks and illness. It is this framework which is so angering to many patients who feel like #hospitalglam represents yet another burden to add to their experience, rather than a moment of choice with a bit of tongue-in-cheek sparkle. Thanks media.

Patients are people first. And people are inherently diverse. The way we react to illness varies greatly, but that doesn't mean we can't appreciate or support the way others choose to seize the day. Even if we don't understand or like their particular choice. While #hospitalglam celebrates fashion for it's power to give illness and the medical system the finger, others use art or music. Some form book groups or join support organisations. Some garden. Some engage in cosplay. Some are Trekkies and yet others, shudder, Beliebers. The idea that illness is some sort of end of the world scenario is far from the truth for many. When you are living with an illness or disorder that may never go away you find ways to deal with it, and that will look differently for different people.

Whether other's do or don't like #hospitalglam is beside the point. This is her experience and her expressive outlet. She is entitled to do whatever works for her. Just as every patient is entitled to do what works for them. As someone who wore sky high red sparkly heels to their MRI and bright red compression stockings during their pacemaker implantation, I celebrate her chutzpah and raise my bright red lippy in salute.

Michelle
Posted by Michelle Roger at 11:23