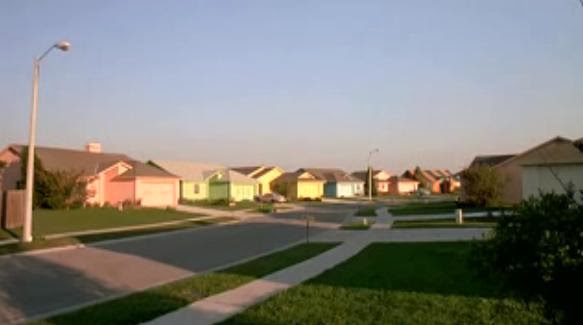 Picture it if you will. A Saturday night in a small town. A nondescript suburban house. Cookie-cutter brick. A collection of impractical right angles. The token attempt to differentiate with the others on the street. A swathe of green lawn. Wind blown plants set out in a rock covered garden bed. Unremarkable to the dozens that surround. Inside. A small beige ensuite. Coffee-coloured tiles. Glass and chrome. A large mirror sits on the wall, reflecting the scene unfolding before it. A couple. The man standing before the woman. He in shorts and t-shirt. She in red dress and grey stockings. Something about his stance suggests a mixture of concern and uncertainty. Something about her stillness jars.

She is sitting, bent in half on the hard toilet lid. Chest pressed to knees. The lights above beat down on the tangle of black hair on the back of her head. Pain-sweat sticks random hairs to the nape of her neck. She catches her breath with each heightened burst of pain. Cold smooth tiles anchor her feet to reality. She holds tightly onto that feeling, focussing on the texture below her heals. Overly controlled breathing, a futile attempt to control the situation. She continues to fight long after the battle is lost. Pain, misery, and lost dignity are thick in the air.

He is murmuring soft words of encouragement and comfort. Concern flickers on his face as his composure slips. Gone as fast as it appeared. Calm replacing worry.

She is unable to unbend, stomach pains increase. Partial paralysis of your digestive system is not what good times are made off.

He gently lifts her weak leg. Holding her trembling foot against his thigh as he slowly unrolls resisting compression stockings down her pasty, wasted legs. First the right, then the left. Her legs dropping to the floor. Each foot making a small smacking sound as they hit the floor.

She hunches over as he helps her take off her dress. A reflexive shudder with each attempt to unbutton and unzip. A gasp of pain. Their uncoordinated, combined efforts, would be funny, except for the ever present pain. A moment of fear intertwined with a wave of relief, as the fabric gets caught and is suddenly released as he gently pulls it over her head.

He places her pajamas, the soft, old, comfortable pair, kept just for days like this, on the marbled bathroom bench. The only height that she can reach from her bent position. He steps aside so she can have a moment of independence to dress herself. But not too far. He stands ready in case she needs help.

She emerges. Clothes rumpled and askew, but all parts covered enough. She stumbles, bent in half to the bed. Curling up in sheets as pale as her flesh. Pain and misery eclipsing the world around her.

He helps her sit up slightly at the edge of the bed. A contorted mess of distressed flesh. A fragile dam of tears.

He gently holds her shoulder so she doesn't tumble from the edge of the bed. Handing her the cocktail of pills one after the other. Waiting patiently for her extended hand to indicate she is ready for the next. Gentle words, encouraging, barely heard, between pain and concentration. But the feeling, the emotion behind the words, soak into her.

Shaking hands bring the glass of water to her mouth. A small moment of panic as a pill starts to stick. A small moment of relief as it manages to go down. A cycle repeated for each. Big, small, pill, capsule, an eclectic mixture of sizes and colours. Trying to swallow, when your limbs and body are at awkward compressed angles is not for the faint of heart.

Him, quite unwavering support. A rock. Her rock. Anchoring her tonight, and all the other nights that have become part of the pattern of their lives.

He covers her with the sheets. Gentleness out of keeping with what others see, but so familiar to her. He moves quietly out of the room. Turning off the light. Closing the door softly. A quick parting word to let her know he is close by if she should need anything.

It's quiet moments on Saturday nights in the tiny coffee-coloured ensuites, of everyday brick houses. It's a steady, gentle presence in the midst of pain and illness. It's the hand that holds another's when they sleep. Transferring strength and comfort in equal measures.

It doesn't shout. But is more powerful for the whisper.

*Mr Grumpy took me to see Edward Scissorhands for our first date way back in 1991. I knew he was keeper right away.