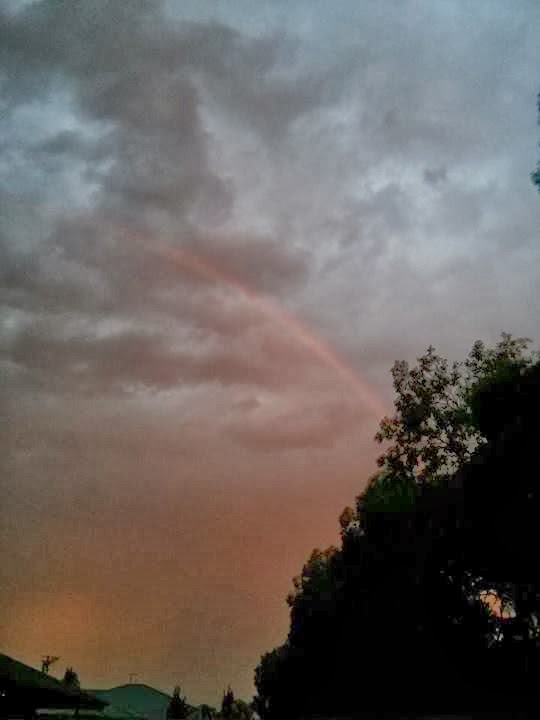 There are moments in time that seem to collide perfectly, inexplicably, and unexpectedly. Sometimes you don't know that you need one of those moments. You don't know that you need that little light in the dark. Or that the dark even exists. Because you stuff it down. "It" being you. You stuff you down. Deep down. Hidden behind a wall made of the necessity and dross, of day-to-day living. You push yourself further and further down because life says you must solider on. Because the morning shows are full of inspirational people who are worse off than you. Because you feel that you aren't entitled to simply feel the moment. And because if you truly face what is happening to your body, you don't know if you'll be left standing or be reduced to a heap on the floor.

And then an evening comes along. An unremarkable evening. After an unremarkable day. Just another in the long list of hard days that seem to be more the norm than the exception of late. Ordinary. Because life with chronic illness, means that illness becomes ordinary. Until a moment begins. It's first stirrings unrecognised. It's importance hidden because your mind is stuck in the rhythm of the metronome. One foot in front of the other. A slow spirit movement. So far removed from the mind, that its sweetness is not noticed or appreciated until you are in its midst. A moment that will be best appreciated in the days that follow.

And then you look out your kitchen window and see a rainbow poking through the remnants of a late afternoon storm. And something is different. For that one moment you ignore the fact that the window remains unwashed, a fact that you have beat yourself up over for the past few weeks. You ignore the noises in the background. The water boiling on the stove fades. The chopping board and the mix of ingredients on the bench sit ignored. The moment has begun.

It had been one of those days that brings to my mind The Build Up, from when we lived in Darwin. Seasons run differently in the tropics. The Dry, The Build Up, The Wet, The Let Down. Seasons felt in the blood, but The Build Up most of all. When the monsoon clouds would roll in threatening. The air would crush. We would sit on the cusp of a downpour, waiting for relief. Hour upon hour. Boiling black clouds would tease. And then they would be gone. No rain. And no relief. For month after month. Tearing at the nerves. And now, in this little corner of the country, far removed from the tropics, that feeling was once more present. The air had been thick and heavy all day. The winds blowing from the north were hot. Standing outside a physical assault. My knees would threaten to buckle unless I retreated to the ground or stepped quickly back into the air conditioned confines of the house. The clouds kept threatening, but only a few drops would fall, to make the air humid and claustrophobic.

And then there was a burst of heavy rain. Short and loud.

And out my kitchen window a rainbow appeared. Not much of a rainbow. A coloured smudge in the sky. A double-take required to ensure it wasn't the product of my imagination.

But there it was. A little, curved line of colours stretching out across the rumbling sky.

And I was taken by a desperate need to go outside.

Pots were left to boil. Food ignored on the bench. That need eclipsed them all.

And there it was. Shining as the evening darkened. Defying the charcoal sky that surrounded.

It was right. It was all and everything. Seven lines of colour in the midst of seemingly overwhelming dark. I breathed it in. I felt it in my bones. And the beginnings of a smile could be felt.

As it faded in the darkness I turned and was rewarded once more. 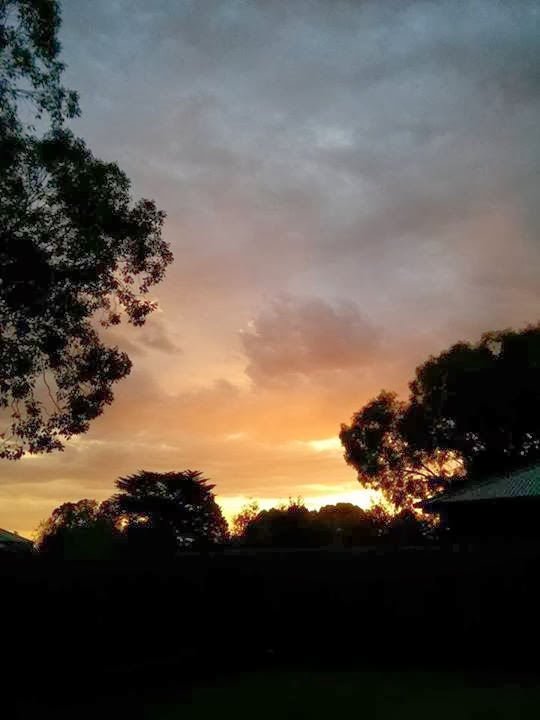 I stood in the remnants of the storm. Watching the sun retreat from the day and feeling the earth move under my bare feet. Damp grass below and wet leaves murmuring above. Small cleansing drops from the heavens, wiping away layers of darkness and dust. And I felt lighter for the first time in months.

A first breath or a moments reprieve. Either way it is treasured. I'll hold it tight and bind it to my battered soul. I'll keep it close so I can look upon it at need. And remember the colours in the sky that wiped away the burden of an unrelenting, breaking body. If only for a moment.

Moments upon moments. Moments I needed, even though I'd never even known of that need. Moments whose importance would have been overlooked a day earlier, or day later. Timing is everything. I was ready. And so I saw what was before me.

Serendipity at it's finest.

Rainbows and sunsets. Colours. Light in the dark. A promise of hope and renewal. A reminder that moments occur when you are ready for them. A reminder to embrace them when they do. A hope that all of us find our moments.