It's Just a Flesh Wound aka I'm a Dumbarse.

A few years back I wrote a post about the internal dilemma I face each time a health issue crops up. Well dilemma is probably the wrong word. In reality the dilemma is token at best. The outcome is pretty well decided from the first stirrings of “hmmm, well that's not normal.” I think it's more to sooth myself into saying,“Well you weighed that one up well, Michelle. You looked at the data provided, did a review of your medical history and the examined all the pros and cons. Well done. You Rock.” Whereas the reality is far more, “Shit that's not right. Should I go in? Nah. She'll be right. It's just a flesh wound.”


Normal is not a word I completely understand these days. It might as well be written in Sanskrit for all I can decipher. My view of health and what constitutes a worry is seriously skewed.

Recently I was in having my IV Saline and notice a MET poster on the wall of the room.

Three of the criteria. Systolic under 90 and HR under 50 or over 130 made me giggle. Both of these indicators are so common in a world of autonomic dysfunction. Systolic of 90 is a walk in the park. A complete doddle in fact. Pre-pacemaker low 40s or high 30s for a hr were a daily occurrence. For my POTS friends 130+ occurs on days ending in 'y'. New or unrelenting chest pain again something most with Dysautonomia contend with on a daily basis. We are a walking (okay stumbling, swaying, staggering) MET call. 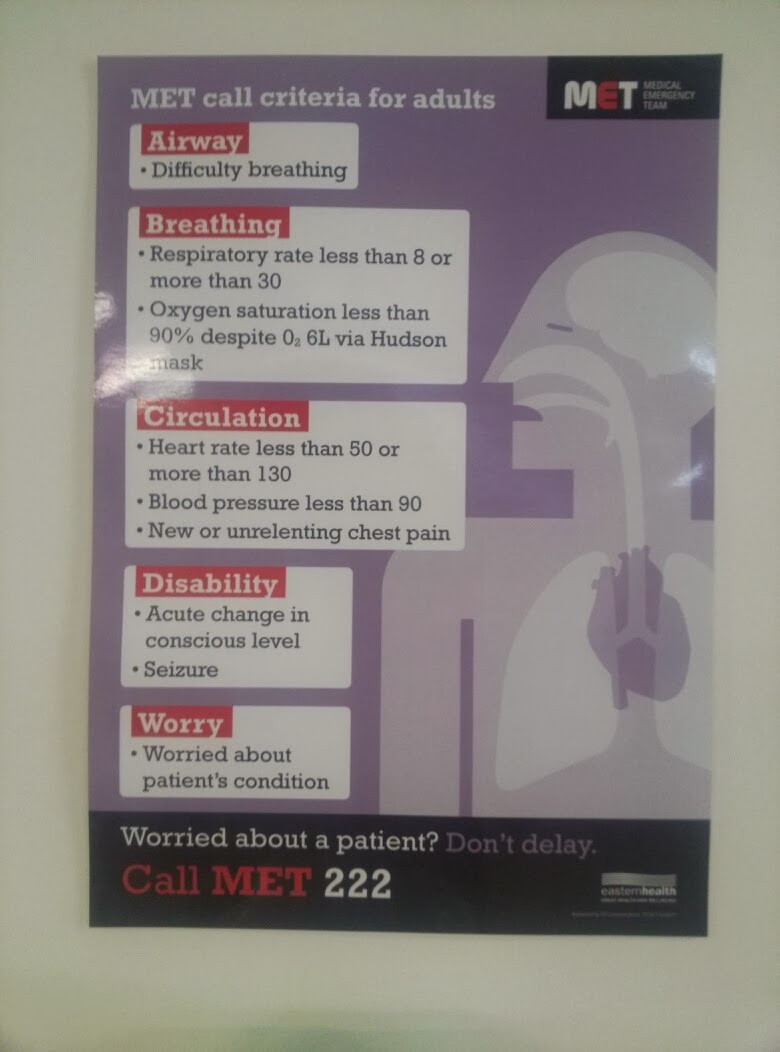 The combination of a skewed normal and a medical system that often treats you like you are lying when your obs don't make sense (I'm looking at you nurse who took my temperature with 3 different types of thermometer before she would believe my reading of 35.2 C.) means I am not a frequenter of the medical system until I am in “dumbarse” territory, as Mr Grumpy would describe it. And even then it's not guaranteed.

1) We have only recently moved to a new town. About 3am of the first night in the motel I had excruciating kidney pain. Not a first be any means, but still not pleasant. I tossed up that I was taking more desmopressin than usual to cope with the move and our current heatwave, and that my last few kidney tests had come back relatively okay. I knew I was dehydrated, the skin that still stands up on my hands when I pinch it tells me this. But the idea of negotiating a new, country, ER in the middle of the night was just too much to contend with when I was feeling so incredibly unwell (you have to admire the strength of my convoluted reasoning right there). Plus the whole, “I refuse to start the first day in our new town with an ER trip”. That just feels like I'm jinxing myself. So I road it out. When I mentioned it to Mr Grumpy the next day I got the whole “dumbarse” routine. And he's probably right (don't tell him I said that) I should have gone in. I should probably go in now and get fluids, but here I am sitting tapping away on my dying lap top, laying on bed, not going in.

2) Incident 2 is an ongoing one that started the weekend before Christmas. As regular readers will know I received two new diagnoses (Myotonic Muscular Dystrophy and Gastroparesis) and my beloved Great Dane, Thor, passed away all in the fortnight before Christmas. Merry Fricken Christmas, folks! When that weekend I discovered I could nolonger move the toes on my right foot it was a bit of a final straw. I couldn't take one more shitty thing at that point. I had a day of self-pity and sobbing into my pillow. Then I wiped the snot from my face and hit play on the cassette tape known as “Michelle's Hardcore Denial Hits of the Summer.” ER be damned. That's where really sick people go.

I told myself that it'd come back. It was just the lack of blood flow. Or a pinched nerve. You know, the usual suspects. I did the basic stroke routine (perks of having worked in stroke rehab). Then I pretended like it wasn't an issue. By the time two-weeks had passed and I still had no movement I finally thought it was time to see my GP. Needless to say I received another “you're a dumbarse” lecture and she rang my neuro on the spot. Of course their were no emergency appointments, and given the fact I was neither in pain or dying, I decided not to push it and just take the earliest available.

As I lie here today I have minimal movement back. But minimal is some, in my deranged mind. I'm choosing to ignore the accompanying reduced movement in my ankle. What reduced movement? What toes? What ankle? (See, I'm good at this). I have an appointment booked for two weeks to review things. But the idea of having to drive the 2 ½ hrs back to the city so soon after the move is not inviting and I am thinking of cancelling as I have another appointment with her a month later. When I factor in the lack of pain and dying, I can easily reason that it's not that important.

And so I sit here in “dumbarse” territory again.

The place where past negative medical experiences and an impressive ability to normalise the completely abnormal meet.

But you know, it's all okay. It's not like I'm really sick. It's nothing but a flesh wound.

Update: Since I wrote this post I have had a moment of sanity and have decided to go to my neuro appointment next week.

Denial is my weapon of choice.