Pacemakers, capes and becoming the bionic woman, or Seven of Nine, if you talk to Mr Grumpy. 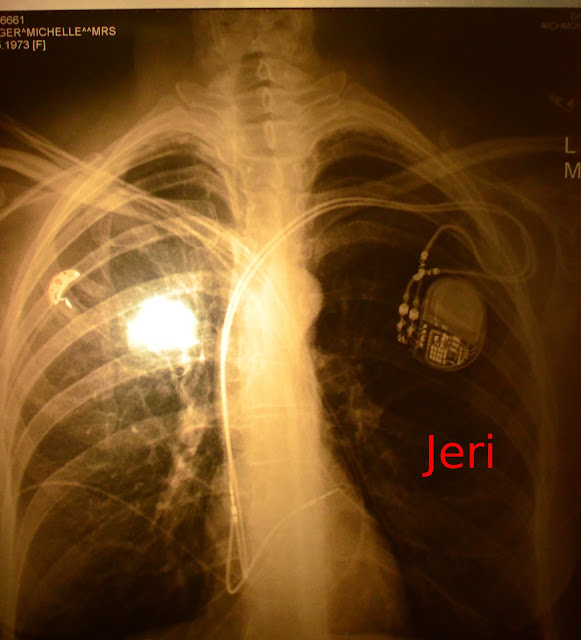 This time one week ago I was in the midst of teeth clenching and swear-mumbling. I begged for icepacks and looked aghast at the fact my cardiac surgeon left for the day thinking that a couple of panadol would do the trick for post-op pain. Ah, good times. But that was a week ago. And today it seems a lifetime ago. 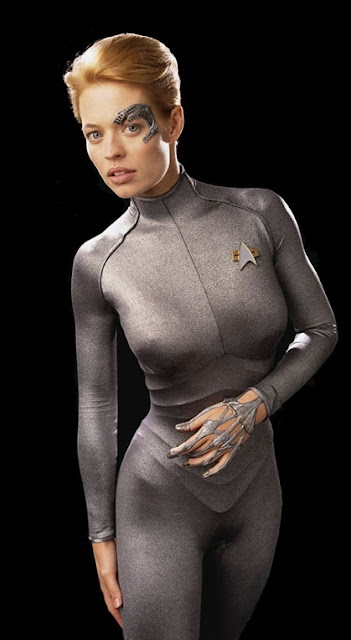 I am now the proud owner of a pacemaker, or Jeri as I like to call her. You see, Mr Grumpy has always had a thing for Star Trek Voyager's Seven of Nine, played by gorgeous Jeri Ryan.

And because I love him and really this is as close to his dream as he is ever going to get, my pacemaker will forever be known as Jeri. I do refuse to wear the skin tight body suit though. Unlike Jeri Ryan, I am less hot hourglass and more icypole stick/stick insect. No one needs to see that. But I do have my first Borg implant, it's apparently of the cutting-edge medical type, so lets just go with it.

To say I was a little nervous pre-implant is a bit of an understatement. No matter what you read or hear (and a huge thank you to everyone who were kind enough to share their experience, it's so good to hear from other Dysautonomia patients who have been there and done that) the idea of someone cutting into your chest and screwing wires in your heart is a little concerning.

I cleaned and crafted. At odd hours and in my pjs. I even tried to be as fit as possible pre-surgery. Though needing Mr Grumpy to carry me up the stairs at home after a 5 minute walk sort of put paid to that. I had a couple of okay days and started to doubt my need for surgery. Of course that was followed by a few days feeling like I was going to die, so you know I kinda thought maybe, just maybe, my cardio was right after all. 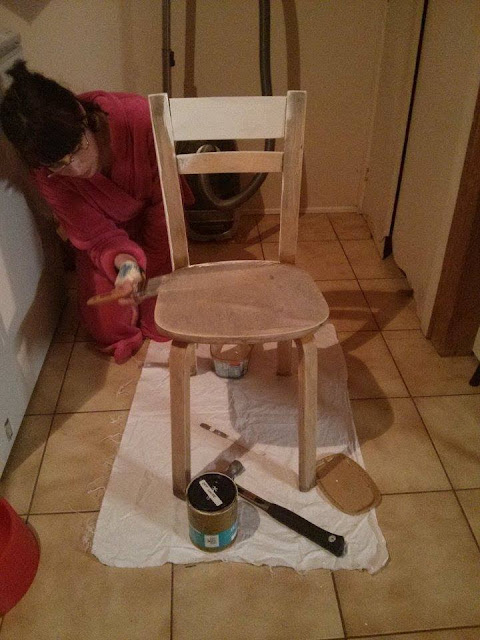 Why yes I did have to finally start that craft project that's been sitting around for months,
9pm, in my pjs, two nights before my surgery. 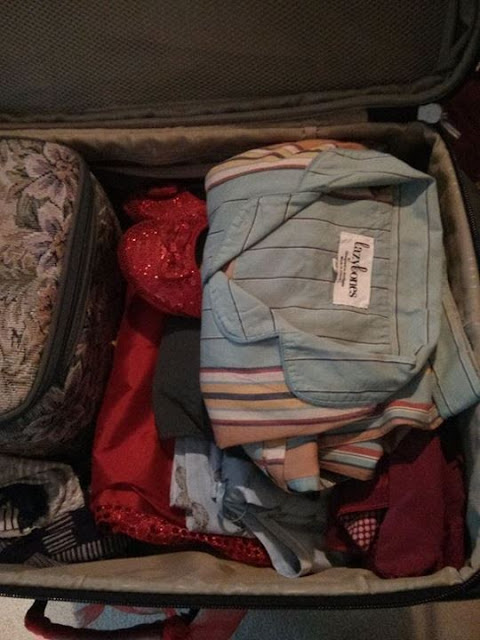 (Always pack things that make you happy.
Like Dorothy slippers, a cape, a spoon dress and nice pjs etc)

Thankfully Mr Grumpy held my hand and managed my anxiety as he always does. We stayed in the city the night before, about 5 minutes from the hospital to avoid the shamozzle that is peak hour traffic. Not that either of us slept, but we went through the motions, tossed and turned all night and were woken up by the tradie truck beeping it's way back into the small driveway next to where we stayed.

I don't often name the hospitals I go to, but this time I have to give a shout out to The Epworth here in Melbourne. Great staff from the admissions lady to the porters and the medical staff. Nothing was too much trouble. Everyone was friendly. They even made me delicious meals from scratch to account for my food intolerances and allergies. I can't stress enough how much of a difference it makes to the whole experience. Last year's admission to another hospital in the city was a disaster from go to woe. Surgery stress aside this was the best hospital experience I have had by far. 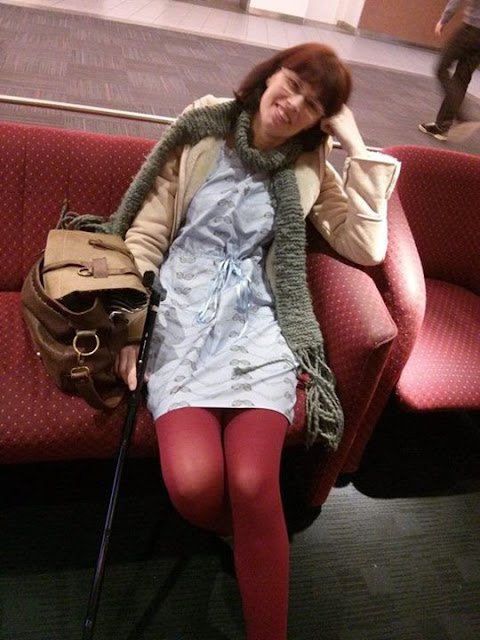 The pre-op nurses were amazing. Even scored me a private room! Mind you once more I was odd woman out. There were a bunch of 50+ year-old men, a 94-year-old woman, and me. I don't think I am their normal pacemaker demographic. For once the staff had read, and more importantly believed, that I had medical adhesive allergies, so they tried their best to avoid the worst of them such as the tegaderm and steristrips. In the photo below you can see they even used a sock over my cannula rather than tape which was a godsend. What I particularly loved was that the staff and the surgeon were happy for me to keep on my red Juzo Soft's for the surgery rather than the hideous white TED stockings you are usually forced to wear. I believe I may be the first patient they'd had with bright red legs on their operating table! 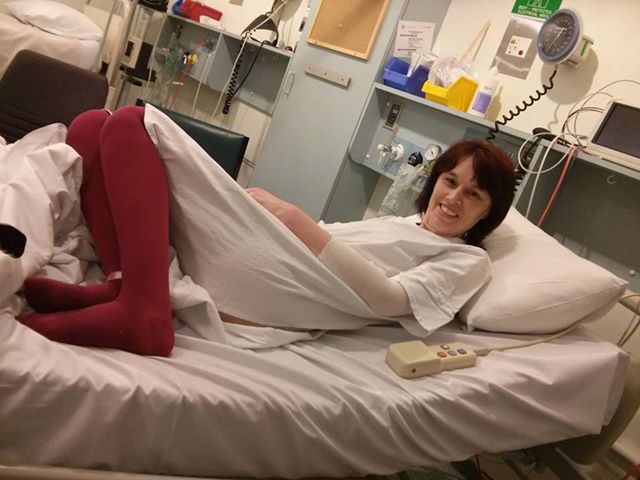 The surgeon came in pre-op and went through the surgery, what to expect, what not to expect, all the risks etc. He even openly gave his infection and complication stats, all super low thankfully. Now that's a first. I had some IV antibiotics pre-op which I will say was a relief after the nightmare of last year's post-op infections. So far so good, my GP checked the wound on Monday and no signs of infection.

In the OR things did go a bit pear-shaped as my body's reluctance to process either sedation or local anaesthetic has become worse (wish I knew that beforehand). Whilst the procedure itself went well, I have way too many memories of pain and hearing the surgeon say "give her 5 more". I may have dropped a number of F-bombs in that OR. He did come in the next day and apologise. Apparently I was given a ridiculous amount of anaesthetic and sedation, but it just didn't work. At least now I have an official letter stating that I am only ever to have general anaesthetics from now on. After battling to get other doctors to believe me, it is a relief to have it finally acknowledged and documented. Now if only I didn't have to feel the pain during the surgery that would have been nice.

Now, because many have asked, down to the nitty-gritty.

I ended up with the latest Medtronic Advisa MRI SureScan Pacemaker, which is MRI compatible (not for the first 6 weeks post-surg, though). Helps to have a surgeon who is researching their efficacy. Given the high likelihood that I will need further MRIs that is a bit of a relief. It's set to kick in when I drop under 60bpm at the moment, though my regular cardio did say it'll likely go up to 70 long-term. Thanks to the weight I've lost he had to cut a pocket in my chest under the muscle for the device, whereas most go under the skin. So the pacemaker sits in that pocket, which I can see and feel, and then two wires were threaded through a vein and into my heart where they were screwed into the internal heart muscle wall. Just a heads up for anyone who has this done: Under muscle is more painful and takes longer to heal and settle. The scar is pretty small compared to what I was first told. About 2 inches long and about two inches below my left collar bone.

It's strange how many people who think I would be worried about the scar or that the pacemaker will be visible. That is the least of my concerns. In fact, I couldn't give a crap about scars or visibility. Now, my heart stopping? That I was concerned about. Aesthetics doesn't even rate in that context.

I was unable to move for the next 4 hours and had continual heart and bp monitoring during that period. The nurse wrote 6:45pm up on my board and said I could get up to pee at that point. That may have been the longest 4hrs of my life. Urinary frequency and a bag of fluids during the procedure meant that I was using every Kegal exercise and prayer I had ever heard of to hold on. Their was the bed pan option but having had that indignity before I was determined to hold out. Amazingly I made it, and even more surprisingly I managed to walk from the bed to the loo without help. Go pacemaker. Go!

Pain was not my friend that first night. Not just my chest but, left shoulder and arm, as well. All that was on offer was a couple of Panadol and an icepack. Not sufficient by any measure. About 4am it was tears in the eyes level of pain, and it takes a lot to get there these days. The nurse did take pity on me and get me a couple of Panadine, but really I might as well had a sugar tablet it was that useless.

I had a holter-monitor on till the next morning to monitor how it was working. And the pacemaker was checked the next morning to make sure it was working. This consisted of simply placing, what looked like a large computer mouse over the area for about 5 minutes. A chest x-ray to ensure all was in place and a visit from the surgeon and I was finally allowed to leave. 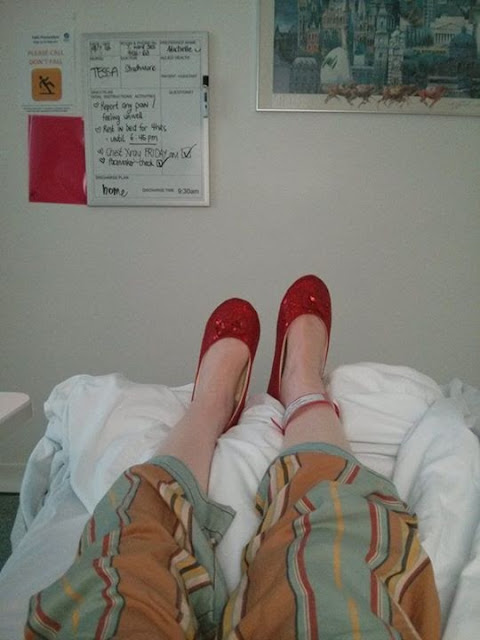 And now Jeri and I are home and getting used to each other.

Many macarons have been eaten (thanks Julia) and many movies have been watched. Prometheus, disappointing. The Hobbit, much better than I expected. Zombieland, still cracks me up. My bestie came by with CDs and meals (thanks Kerri) and made me laugh.

Pain is still an issue but somewhat reduced. I can feel Jeri kicking in all the time, it's weird and kind of hard to explain. A weird fluttering/hiccup is the best I can do. All I know is that I am now even more aware of the drops, so I realise how much I do need her.

Do I feel better? That's a hard one. I think I will know more when the pain subsides. But I will say that I feel clearer mentally than I have in months. Funny how adequate blood flow can help like that.

I managed a slow 5 minutes on my mini-cycle tonight. My heart rate dropped repeatedly but Jeri kicked in and I didn't have that horrible crash I am so used to. My legs hurt but I'm calling it a win at this stage. I did manage to do some crafting today, though I am paying for that now painwise. But still it felt good to do something. 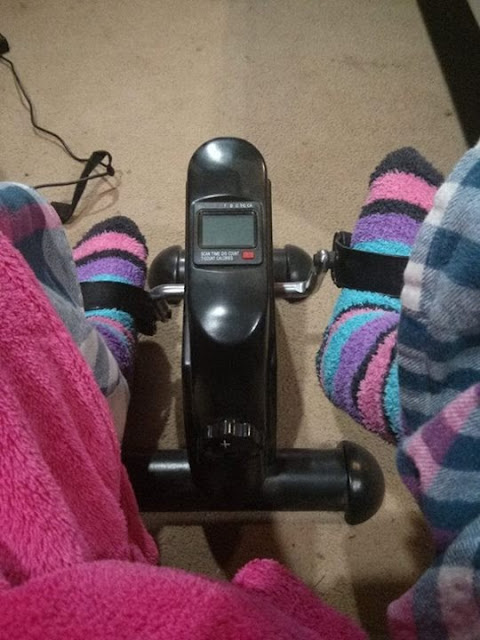 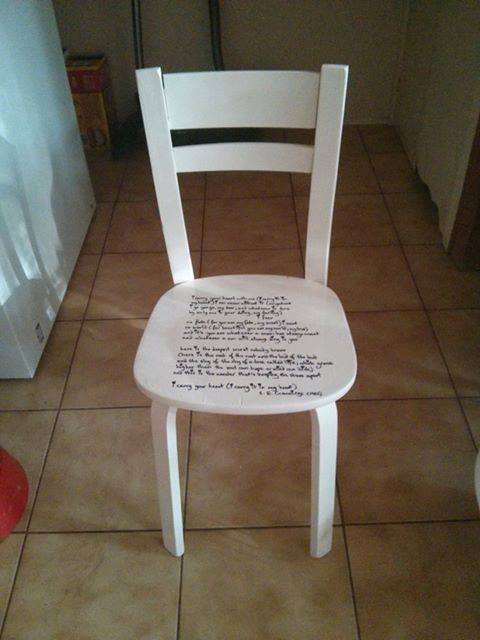 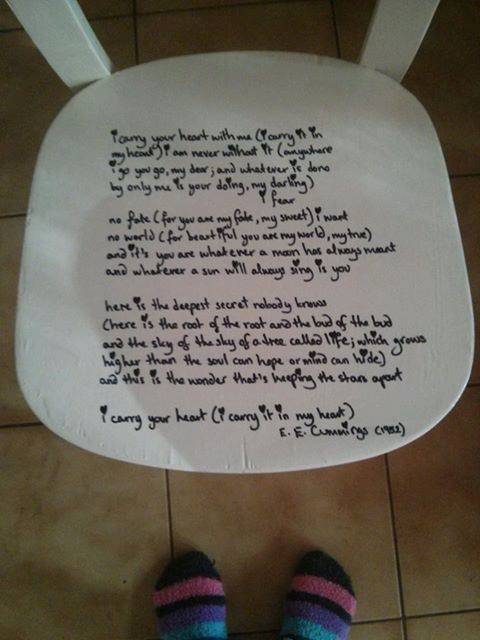 (Woo hoo crafting denial for the win, even with the post craft pain hike.)

Not being able to use my left arm sucks. Showering in particular is not fun. Mr Grumpy washed my hair for me the other day. Lets just say it involved more shampoo in my eyes and me spluttering than the romance I remembered from Out of Africa. Not being able to do washing or vacuming whilst good, is frustrating as I have to keep asking for things to be done. I need pjs people, and underwear. Maybe if I streak through the house they'll get the message.

Oh and for all those on FB who wan't me to wear my cape in hospital (thanks Kate), I did. Just for you. I may have been in pain and little over it all, but I made it through. And that my friends, is cape worthy. 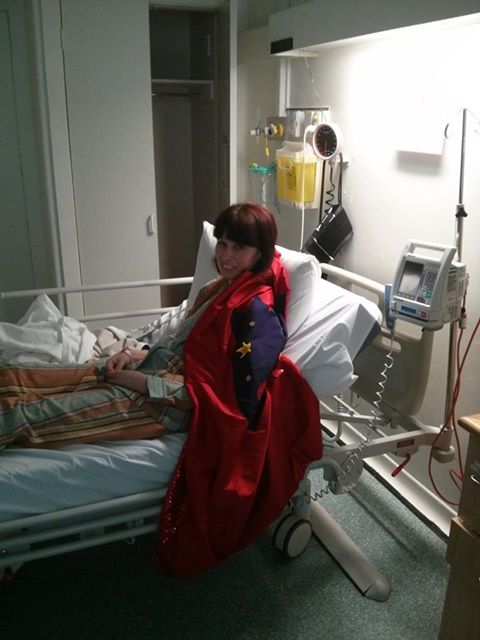