So there's this thing called a Pacemaker, and apparently I need one. 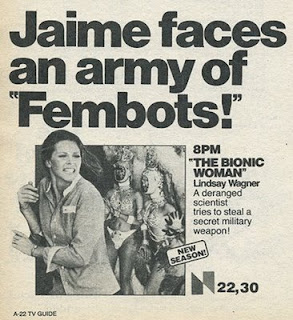 When I was a little kid I used to love watching The Bionic Woman. Jaime Sommers was beautiful, kickarse, and had a great wardrobe. Plus, she got to hang out with The Six Million Dollar Man. What more could you want? Plus, headlines like the ones above, "an army of "Fembots!" ", who wouldn't want to watch a show with such a catchy tag line?

Well it seems I am going to become The Bionic Woman myself, well apart from the whole tennis pro, school teacher, skydiving, secret agent thing. But that's just details. I do hope I get theme music, though.

My dicky ticker is indeed very dicky, or just a dick. I mean, I knew to certain extent. My bradycardia has been getting steadily worse. This past year it has become more frequent and my health has been in a nice neat downward spiral for some time. Equally, my coping skills have been slowly slipping as my body decided to up the ante and become a complete arsehole. And not surprisingly, maintaining a Stepford persona is hard when you are clutching your chest on the floor wondering for the first time if you're actually going to die.

A strange thing occurs when you are chronically ill with a weird unpredictable illness. You start to hope for positive findings. Not positive as in sunshine, lollipops and rainbow farting unicorns, but positive as in, please find something concrete wrong with me. So often with this disorder you go in for testing and it's a "good" day so the tests come back clear. Symptoms fluctuate day-to-day so trying to catch them in a one off, short test can be difficult. So part of me wondered if the tests my doctor ordered would show anything. Even my cardio said, Murphy's Law says that it will a good day and come up clear.

But this time I had the clear results I hoped for, and I'm equal parts glad and terrified. My 24hr holter monitor showed clear bradycardia. Not an hour went past without my heart rate dropping to dangerous levels. 80+ times over the 24 hr period. No wonder I've been feeling like death.

It's also the first time in the 7 years I've seen my cardio, that she was 100% sure about my options. Pacemaker, pacemaker or pacemaker. I do have high risk factors for the procedure due to other issues (because I'm lucky like that), but it's either have the procedure or risk my heart stopping. So really it's a Clayton's choice, the choice you have when you don't have a choice.

In reality I know that getting it done is the right choice. Avoiding things like a hypoxic stroke, or heart attack, and getting blood to my starved organs is all good. Getting rid of this permanent chest and neck pain and feeling my body randomly shutting down are also a positive. But, ARGHHHHHHHHHHHHHHHHHH.....

At this point it's looks like by early July I will be, The Bionic Woman. Mr Grumpy is already calling me Jaime, because sarcasm and humour with a good dose of denial is the only way to go with these things.

To say I'm a little freaked right now, may be an understatement. I decided last night that I would meditate the crap out of my stress, only to find that my fantastic meditation skills lower my damn heart rate even further. Well played, Universe. Well played.

So make me laugh Internet. Distract me with bright shiny objects and inappropriate humour. Because right now I'm feeling a little vulnerable and scared.