Can we leave the drama for The Bold and The Beautiful? 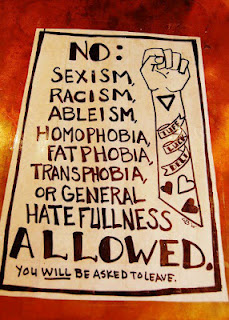 (source)
Wee bit of a ranty post ahead: you've been warned.

Being chronically ill is hard. Unless you've been unlucky enough to sucked into the vortex, it's hard to explain just what a struggle it can be at times. Being ill 24/7 for years on end takes it's toll physically, psychologically, socially and emotionally. It is unrelenting. All of us who tread the path know this and we know just how hard we have to work to maintain a sense of self and happiness along the way. It doesn't even matter what's your poison. We are united by the simple fact that this shit is hard.

Support is vital. We look for it from our loved ones, but often it is only with others treading the same path that we can find true support. There is a shared knowledge that doesn't need to be spoken or explained. Support groups and forums have popped up everywhere. The advent of FaceBook and Twitter have allowed for the development of communities that span the globe. Got a rare or obscure disorder? Don't worry, there is a guy in Azerbaijan who also has it and thanks to the wonders of the internet you can commiserate and laugh over the joys and challenges of life with your particular issue.

As patients we are frequently vulnerable and exhausted. Being sick, especially when you are new to the game, can be a very scary place. We need support and a safe place to discuss the often confronting physical and emotional issues that we deal with. Online support groups and forums fill an important void in the medical system, where housebound and often geographically distant people can come together to find knowledge and support. They have many fantastic attributes.

But there has been a perceptible change in the functioning of many communities. Maybe it was always there, but these days it's become far more visible thanks to the immediacy and inherent anonymity of the internet.

Drama in the form of illness oneupmanship as so elegantly described by Carly Findlay over at Tune Into Radio Carly. Where patients try to out-sick one another. And the winner is in truth the loser, not that the participants can see this.

Drama in the form of judgement (check out Claire Foust Martin's post over at Stop POTS Virginia). Judgement in the way you handle your illness, your treatment choices, or your philosophies. Patients attacking patients, carers attacking carers, it can be truly disheartening.

What is being achieved by this? Why as patients aren't we calling each other out on this bullshit?

As patients, or carers, many of us have seen the worst of the medical system. A system often populated with doctors who either don't understand, are dismissive or in some cases, are outright hostile. A system where there is a lack of research in under-recognised disorders, like Dysautonomia. A system not set up to deal with complex and chronic conditions. Where money talks and where treatment and diagnostic options are often non-existent.

Many have seen the worst of those who we thought were friends or family. A lack of understanding and judgement. People who walk away, or talk behind our backs. People who leave us high and dry when we need them most.

And now we are set at tearing ourselves apart piece by piece, because we don't agree with what someone else says or their treatment choices.

The reality is that my treatment choices don't affect anyone else. Nor do anyone else's affect mine. As individuals we have the right to make choices that suit us based on our individual presentations, beliefs and life circumstances.

It is possible to suggest alternatives, to point out concerns with a particular treatment, to disagree and choose different paths, in a respectful manner. Disagreement is a good thing as it makes us all re-evaluate our positions. It may open our eyes up to alternatives we've never considered or it may reinforce our original position. But do it with respect.

Do not send multiple emails demanding the person tries a particular treatment.
Do not decide that their reluctance or choice not to take up that treatment means that they either don't want to get well, or aren't as sick as they 'claim'.
Do not tear them a new one on a thread because they disagree. You may be right, but your method and tone serve only to drive people away.

For example: Just because you don't believe in or use Western medicines doesn't give you the right to write "maybe when some of you have kidney failure you'll wish you hadn't take some of them" and it sure as hell doesn't sell your own position. It smacks of judgement and a lack of compassion. Concern for the well being of fellow patients is an honourable trait, but can be written with a very different and supportive tone. (This isn't a post for or against any particular treatment option. I've seen equally callous responses to those who follow a more alternative path. In either case, it is appalling behaviour from adults).

We are better than this.

If you make an informed choice in the form of humour, religion, diet, exercise, medications, meditation, supplements......or any combination of things to deal with your illness that's okay, and no one has the right to tell you otherwise.

We all have the right to choose what works for us.

Aretha was onto something when she sang about R.E.S.P.E.C.T, because that's what it is all about.

Life is too short and this shit is too hard to add this level of drama to our lives. It is unnecessary and it is something we can choose to stop.

Support does not require agreement. And difference doesn't instantly equal bad. And manners cost absolutely nothing.

Being ill isn't a competition and no one has all the answers. But what we can do is support each other through the tough times. We can provide a shoulder for those in need, laugh at the absurdity of life and rejoice in the small successes we can achieve. That is a far more rewarding and positive way to spend what little energy reserves we have. We shouldn't need to add a Code of Conduct at the top of a group that says: act like an adult, use your manners and don't be a dick.

When we leave this world, we all need to decide what we want as our legacy. Do you want to be Right at any cost, or do you want to know that you made even a small piece of the world a more compassionate and better place.

Time to actively bring back the support to support groups. Six years down the track I am still friends with people who I met in online support groups early in the piece. They have made this experience bearable and they are family. I want others to have that experience. That gift. Because I know how important it is.

So if your name isn't Ridge or Brooke, and you haven't accidentally slept with your husband's best friend, who is really your long lost half-brother/cousin/uncle/dog walker/mysterious European prince. After eating hallucinogenic berries whilst castaway on a desert island, following a mysterious yachting accident, set up be said royal, dog walking, blood relative, leave the drama for the TV soaps.

Michelle:)
Posted by Michelle Roger at 17:57