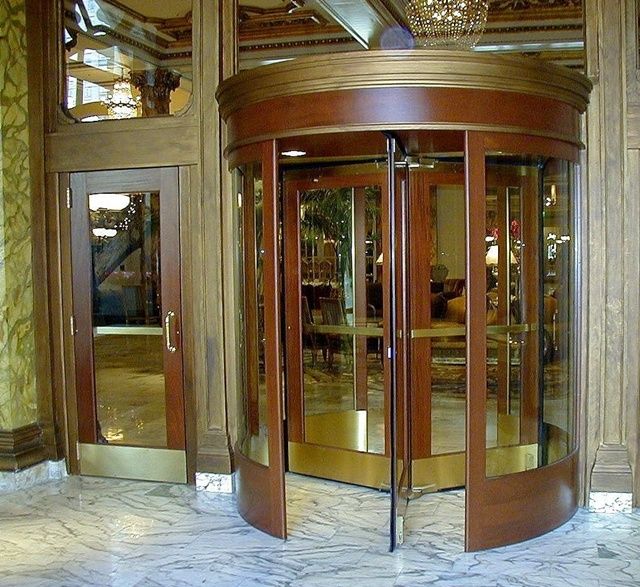 [Image: a gorgeous wood and brass revolving door at the Savoy hotel. Source]

Tuesday I sat in my neurologist's waiting room. It was full to overflowing as she was running overtime. It's not uncommon. All it takes is one late patient or unexpected emergency for the program to blow out. I can count on less than one hand the number of times in the past nearly eight years I've been seeing her, where she's hurried me out her door. But the cumulative effect of this tendency to take her time, on top of those other factors, also stretches that list out further and further.

Fellow patients came and went. Heading off for a belated lunch or restorative coffee. I commiserated with the petite elderly woman across from me about the delay. We commiserated again when she came back from her impromptu lunch to find me still sitting there. Surprisingly most people were happy to go with the flow. Momentary frustration replaced by resignation. Getting in on time to see any doctor is rare. There's an urban legend that some guy living in Preston once managed to have an on time appointment at some medical clinic somewhere. No one really believes the myth, but we all have a little kernel in hope that maybe, just maybe, it was true, and in turn that it could also happen to us.

When my name is called she talks about how much she loves my new hair and clothes. We've always bonded over a love of fashion. I wheel down to her room, my driving skills hampered by exhaustion and building hypotension.

"How are you going?"

How to sum up the shitfight that has been my life since I last saw her? It's never easy. Physically and cognitively things have gone down hill, though it is the later that concerns me. Where to begin? I start listing the physical issues. Even I know how disorganised my communications are, fatigue having amplified my cognitive fog. Part of it is also my worry. The worry that I've voiced on occasion before hastily stuffing it back down, binding it's limbs, shoving it into a box, welding the box shut, before tying bricks to the outside and tossing it over the side of a ship somewhere over the Mariana Trench (I am nothing if not thorough in my denial).

While my physical issues are problematic, apart from the odd exacerbation, I can deal with them. I've come to accept that they are simply part of life and while they can be difficult to deal with at times, after ten years I'm made my peace with them (I fully reserve the right to bitch and moan about them in the future. I'm not fool enough to believe that acceptance is reached, and all is fine and dandy in the world from that point on. Life doesn't work that way.) But my cognitive issues aren't improving. Things are better than they were the first half of the year but they are still no where near where they should be and the term brainfog underplays what I've been experiencing.

When I start describing the heartache of finding writing and reading difficult she instantly recognises the importance of the issue. Over the years of our relationship we've frequently discussed my writing. She's been excited when I've presented at a festival or had a piece published and always added that I am a blogger or writer to my letters. She understands that not only is this important to me, it is indicative of a significant problem. My language skills have always been my strength. And their deterioration a sign she can't ignore.

Back in June I wrote of my worry that I was forgetting important things. Turns out I was. Emails came in querying where I was and why I hadn't completed certain tasks. The embarrassment combined with a realisation that my fears were founded. I was not just forgetting the little things I was forgetting the big thing. The things that were important to me. I have since sent off many a mea culpa email, apologising, and where appropriate, trying to explain what had been happening. But it is the ones that related to my writing that have hit me hardest. That I could forget things so dear to my heart is worrying. The fear that I still have a collection of important events or issues that have escaped my mind is ever present. It would seem I was going through the motions but nothing was sticking. Even when I have interacted, somewhere between event and storage, the information simply evaporated.

Memory, language, attention, speed of processing,...I list off my concerns. My understanding that one may underpin another, or be working together to create the impairment.

"It may be useful to have a Neurorpsychological assessment."

A kick to the guts.

Not that I haven't thought about having an assessment. I have. On multiple occasions. Especially following my SPECT results, and more so the last six months. But telling a former a Neurospychologist that they may need a neuropsychological assessment is confronting. Mr Grumpy knew about my hesitation. I've discussed my fears with him on more than one occasion. He pipes up to fill in the blanks where my mind dissipates, as I face the realisation that it's not just me who thinks I need to be assessed. That the expert in the room agrees. I start to recite the problematic issues involved in assessing someone who was previously the assessor. The community is small. And I don't want to be assessed by someone I know. I know the process and the assessments used.

"I still know all the tests. I can still recite the memory stories and draw the RAVLT!"

Why that phrase stuck in my head I don't know. Maybe because a small part of me registered the mistake.

It wasn't until I was sitting on my loo 24 hours later, that I realised that you can't draw a RAVLT, a list of words. You can, however, draw a Rey Figure, which is what I had in my head, and I can still draw.

Word substitution. Crap. Just a small example, but when these tests have been your bread and butter and you've conducted them more times than you can count it is confronting. Somewhere between mind and mouth or mind and keyboard, things get lost. Going back the other way is not much easier these days. Attention, divided attention, memory it's all screwy. And the concentration and effort that is required to try and present a good front is frequently exhausting.

There was research that came out around 2011 that suggested that doorways were essentially memory scrubbers. A kind of purging of unnecessary information as we move from place to place. It's thought to be responsible for that common feeling when you walk into a room and then stand there having already forgotten what you were supposed to be doing. I feel that every day. Though I often feel like I am stuck in a revolving doorway rather than simply passing from one room to another.

There's a pivotal scene in The Walking Dead where three characters get stuck in a revolving doorway. One fights his way out through the doorway condemning another, Noah, to be eaten alive by the zombie horde, while the third, Glen, is stuck watching in horror as this occurs on the other side of one of the glass partitions. Noah is my memories being eaten, while I'm Glen, stuck on the other side of the partition, impotent and condemned to watch my memories being ripped apart. (First guy gets his comeuppance later in the season, not sure what my real life equivalent would be. See, that's what cognitive issues give you, an unfinished metaphor, or parable, or....well my brain can sort of feel what it is but I can't quite get there.)

She mentioned a name. A Neuropsychologist she assured me was very competent. It wasn't a name I recognised, not that I can trust my memory at this point. And I acquiesced. In truth if I hadn't blurted out an impulsive "Okay!" right then and there I likely would have left the appointment with no referral sent off. I would come back in six months having progressed no further except for a few more blood tests for more rare disorders. I feel sick but resigned to the fact I will soon be siting across from someone asking me the same questions I asked the patients I saw back when I was working. I wonder if he'll find the trick to making me feel relaxed? I wonder if I'll be able to stop myself from judging him every step of the way? Poor guy. I feel sorry for him already.

I sat there while she dictated her letter. I must have looked deflated as she assured me that she's not giving up. That she knew other doctors did. That other patients are left in limbo with no support and trying to navigate their diagnostic journey alone. She assured me she had patients where it took ten or twenty years to diagnose, but she kept with it. She assured me that every time something new and weird comes up at a conference that she instantly thinks of me, and starts trying to work out if it will fit. She assured me that we know more about autonomic disorders now than five years ago. That this knowledge will only increase with time. She assured me.

We left the appointment and headed to see our son. It's one of the bonuses of the six hour round trip to the city. A neurology appointment can hardly be classed as fun. But after the fact when you're hanging out in a dodgy, smelly, laneway taking photos, it's easy to push aside what was discussed an hour or two earlier. You scull down a long black and feel it infuse your being and let the rain fall, softly dampening your clothes and hair.

And you realise that sometimes those doorways are much appreciated. 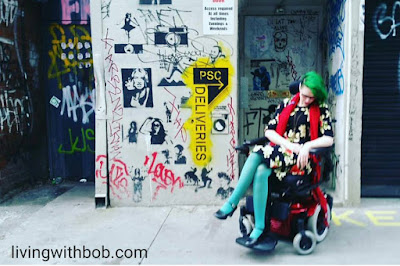 [Image: A woman with green hair (me) sits in her red electric wheelchair in a graffiti covered laneway. She is wearing a floral dress, green stockings and black high heels with a vibrant red scarf and is looking down.]

I've been listening to a lot of Etta James so Next Door to the Blues popped into my head when I started thinking about door themed songs. I saw Vika Bull in At Last the Etta James Story
earlier this year. Gosh she was amazing. If you're in Australia and it comes to your area go along. I've been a huge Etta James fan for years and equally have followed Vika (and Linda) Bull since the early 90s and it did not disappoint.