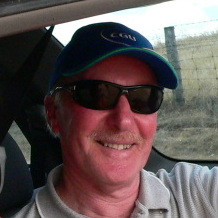 Today my Father-in-law, John, has kindly shared a little of his story with prostate cancer for Movember. I hope his openness will encourage more men to talk about this and the other issues Movember covers, and get the checks they need. Thanks John.

John is also raising funds for Movember.
You can donate here.

It is now 6 years since being diagnosed with prostate cancer.


Back in 1995 I was given a full check over by my then GP including ECG, listening and peering into every orifice he could find, checking reflexes and all body functions and reactions, then blood tests for everything else he could think of. Apparently this included a *Prostate Specific Antigen (PSA) test, which at that time I had no idea what it meant - a reading of 1.2 and of absolutely no concern.

Since then my GP sold his practice and I inherited my current GP. Apart from a bad mix of cholesterol, sun damaged skin and the odd pulled muscle I have not required her services.

My new GP never advised, discussed or recommended anything to do with prostate. It was only on my instigation that she included a PSA test in with my 18 monthly cholesterol check, commenting that it might only open a Pandoras box and decisions would have to be made. The results came back, PSA - 12.8. It was out with the rubber gloves and a better check this further. A referral to a urologist or a radiographer was required, and it was up to me who to see.

I chose the urologist - more rubber gloves and he recommended a biopsy.

'A' biopsy was actually 24 samples.

So after 64 years of not having to be in hospital the procedure was undertaken with the result being 14 samples proving positive with a **Gleason Score if 7. Based on that he advised surgery to remove the cancerous prostate as first line approach. Dumbfounded at receiving that information I agreed knowing there would be some after effects and possibly some ongoing problems or even permanent ones.

Waking up in the hospital ward to the news all went well, margins were clear and they were able to save one bank of nerves. Apart from various tubes coming out and going in to parts of my body they had never been before, all was OK. I recuperated well enough and then having to wait some weeks and then a few months for more PSA checks.

The PSA had not reached optimum minimal levels ("oops must have missed a bit") and I was referred to a radiation oncologist.

After another two, three monthly checks and it had stabilised to a 'satisfactory' consistent very low reading.

All good at that for a couple of years then about 18 months ago PSA started increasing so it's a monitor to see what happens.

Having increased to six times the previous 'satisfactory' very low level my oncologist tells me we have to wait it reaches a level detectable by the latest scans available before further treatment can be determined.

Fortunately unless PSA checks were done to let me know there are cancerous cells somewhere there are no other symptoms to let me know there was anything wrong.  None of the possible real problems eventuated post surgery and no after effects of radiation so life is good considering where I might be not having had the surgery. Thanks to associations like Movember collecting donations towards research, new treatments and detection techniques are continuing to be developed, so by the time I have to start worrying (which my oncologist says will be a few years yet) there may already be better treatment/control or even be close to a cure for my condition.John.
John is raising funds for Movember.
You can donate here. 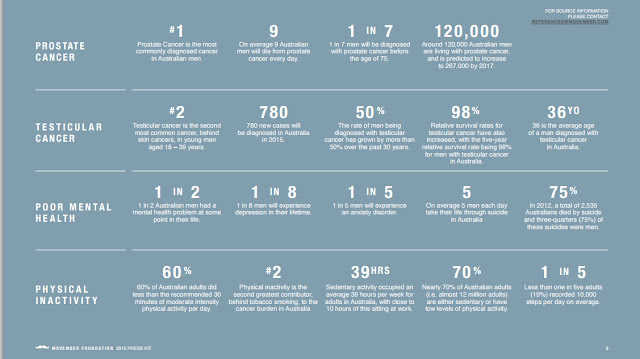 Huge thanks to John for sharing his story. His is one of the many reasons that organisations and events like Movember are so important.

For more information on prostate cancer check out:
Movember
The Prostate Cancer Foundation of Australia.
Cancer Council of Australia

*Prostate Specific Antigen (PSA) Test: The result shows whether there is an increase in this specific protein. Depending on the result, you might need further investigation by a specialist. A high PSA test result does not necessarily mean cancer. Prostate diseases other than cancer can also cause a higher than normal PSA level. (Source: The Prostate Cancer Foundation of Australia)
**Gleason Score: A way of grading cancer cells. Low-grade cancers ( Gleason score 2, 3, 4) are slower growing than high-grade (Gleason scores 8, 9, 10) cancers. The pathologist identifi es the two most common tissue patterns and grades them from 1 (least aggressive) to 5 (most aggressive). The Gleason score is given as two numbers added together to give a score out of 10 (for example, 3 + 4 = 7). The fi rst number is the most common pattern seen under the microscope and the second number is the next most common. (Source: Cancer Council of Australia)
Posted by Michelle Roger at 14:41