On the bright side.

Well it's been a non-stop health blast here at Chateau Rusty, which culminated with me testing the hardness of my floorboards with the back of my head (not something I'd recommend). It must have been elegant to behold. A flailing me trying to grab the back of the couch with my Muppet arms and failing abysmally, whilst my legs slowly collapsed and the world went a tad black. Not to mention me lying legs akimbo on the floor after. At least I managed to keep all the important bits covered. That's always a bonus. Melbourne's fickle weather, migraines and a body that acts like a petulant child are not a good combination.

On the bright side I have managed to watch every episode of The Walking Dead again, (please tell me they're not going to kill off, Daryl) because there's nothing like a little zombie action to make a girl feel better. Now I just need to find a new series to tide me over for the Christmas/New Years TV break. Any recommendations are welcomed.

On an even brighter note I am up for a few awards in the 2012 WEGOhealth Health Activists Awards. Woo Hoo! Thanks to those who took the time to nominate the blog it really means a lot and it also means that information about Dysautonomia is getting out to a wider audience. Always something to celebrate. I've been nominated in three categories this year:

If you want to show your support you can Endorse the blog in the widget in the Top Right Sidebar (next to the post title).

There is still time to nominate the many other fantastic Health Activists for various awards. Simply head over to WEGOhealth. Nominations close 31st December 2012.

I was also honoured to be asked to contribute a piece for the new Dysautonomia SOS organisation, which launched last month. 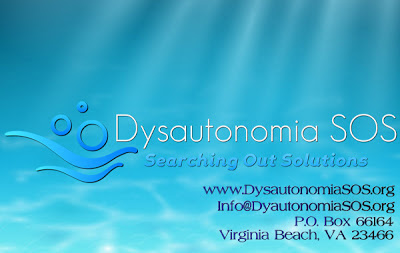 Psychology and Dysautonomia is a review of the quandary that is psychology and Dysautonomia and is aimed at both medical practitioners and patients. This quite a contentious issue amongst patients, many of whom (myself included) have had to deal with the spurious, "it's all in your head" line at some point, and I hope it can provide some clarity on the issue. Big thanks to Claire's big brain and wonderful editing and additions, whilst my brain and body were on vacation. Joining words and punctuation make a world of difference!

This year I was also honoured to be asked to contribute a chapter to the Second Edition of Jodi Epstein Rhum and Svetlana Blishteyn's book, POTS - Together we Stand: Riding the Waves of Dysautonomia. 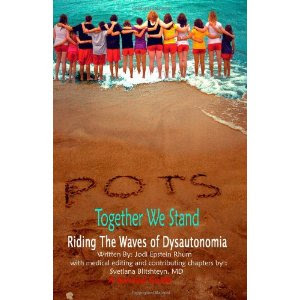 The chapter is entitled, Grief and Dysautonomia (Chapter 8) and examines the way grief presents in relation to living with a chronic illness such as Dysautonomia. Grief is something rarely discussed in relation to chronic illness but it is something we all experience to differing degrees. The new Kindle edition (with my chapter) is out now, with the new paperback out soon.

It's actually been a bit of a fantastic year for Dysautonomia. Not only do we now have Dysautonomia SOS, but also Dysautonomia International launched this year. POTS UK are another organisation that have really gone from strength to strength this past year. We had our first official awareness month and there have been multiple fund and awareness raising events around the globe. There have also been far more articles in newspapers, with a higher degree of accuracy. The most exciting news for me is that more doctors are starting to be aware of the various diagnoses. This last six months I have encountered a number of specialists who had actually heard of POTS, NCS, OI and the like. Such a change to when I was diagnosed back in 2007. This gives me hope. We still have a long road ahead of us, but we have more forward momentum than we've had in a long time.

Congratulations and a huge pat on the back to all who are helping to raise awareness and provide support for those beginning and continuing on the Dysautonomia roller coaster. As Jodi's book says "Together we stand", or as I like to think of it "Together we kick arse!"