What is worse than realising you are an 80-year-old woman? Realising that you are not, and will never be, an 80-year-old woman. For the last couple of years now I've joked that I am only a blue rinse and a hip replacement away from becoming an 80-year-old woman. This is not without a basis in fact. I worked with the elderly for years. I can spot an oldie at 100 paces. I have tested my hypothesis. I have identified my variables and calculated the statistics and it is clear I have many of the features of an elderly woman.
However, like all good theories that should be tested again and again when new data becomes available, I have recently been forced to re-evaluate my conclusions. Upon review, I have begun to suspect that my level of patheticness is not worthy of 80-year-old status. I have come to understand that even Methuselah could kick my arse at this point. 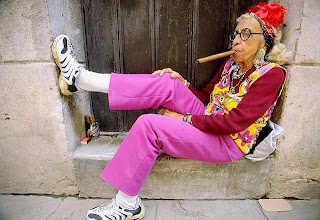 When I first went into hospital for intensive rehab I was filled with hope. My doc said she had sent many patients before. Fool! The minute I walked in something felt very very wrong. There wasn't one young face in the corridor for the 30 minutes I sat waiting to be taken to my room. It was like walking into my Nan's nursing home, complete with hacking coughs and the faint odour of bleach and urine. I stumbled along the bland grey corridor on that first day, expecting to see my Nan come around the corner at any minute. In doorway after doorway I'd catch a glimpse of grey hair, a crocheted blanket and a wiff of Bengay. I was surrounded by room after room of Merles and Franks and Beryls and Alfreds with no hope of escape. I was to be stuck in the room between the neurology and cardiopulmonary patients. Apparently no one under the age of 80 suffers from these ailments. How stupid of me to get a disorder better suited to those who enjoy butterscotch and bingo. Night times I would drift off to sleep listening to the dulcet tones of old Stan in the next room coughing up his left lung. Morning would be heralded by the gentle rhythms of him coughing up his right, followed by the delightful sound of the nurses sucking the phlegm from his clogged and failing lungs. Sadly I was to later find that silver-haired Stan was the Lance Armstrong of the exercise bike, whilst I required training wheels.

It was particularly inspiring that first day when the physios did my baseline measurements. There is nothing more heartening than being lapped by an old chick on a zimmer frame. I'd wander up to the gym for my 3 sessions of patheticness a day, which my lovely physiotherapist was kind enough to call exercise. I'd sit in the waiting chairs surveying the large bland open space before me. One thing I learned early on sitting in those chairs was to avoid eye contact or fain death/sleep. If not you ended up with your new elderly best friend telling you her life story and complete medical history. You only make that mistake once. The gym was a site to behold. It was like some bizarre, overly elaborate hamster cage. It was filled with an army of bent grey-haired ladies in pearls and old men with pants up to their arm pits. They'd shuffle around weird wooden boxes, sit in a chair, stand up from a chair, sit down in a chair, stand up from a chair. I'd fall into a trance watching the hypnotic rise and fall of those frail grey-haired hamsters. Then the tea ladies would come and those same little old ladies and gentlemen would move with speed that bellied their age and infirmity, to be the first in line for a cup of tea coloured water and a slightly moist digestive biscuit. It was like seagulls on a hot chip. It must have been scary for those hair-netted, khaki-coloured, tea ladies as that grey-haired horde descended on mass on their cart. Maybe that's why they always looked like they had just sucked on a lemon, and had delightful personalities to match. Me in my patheticness had to be content to sit and wait for the tea ladies to bring the dregs to the smelly vinyl physio bed as I wasn't trusted not to go arse up after my oh so hectic routine of leg raises. In reality I had no desire to fight those old ladies for their cuppa. I still have a sneaking suspicion that I wouldn't win in that fight.

My favourite memory of that hospital stay is lining up to vote. The corridor was filled with a long line of zimmer frames, walking sticks, wheelchairs and me. Woo Hoo inspiring! Eventually I did make my jail break. Luckily I was released so I didn't have to implement my Shawshank plan through the sewage pipe. One more day and I would have done it, turds be damned.

Then it was me and my grey haired homies at my outpatient physio. It's hard not feel conspicuous in a group when you are the only one not born during the Great Depression. I think I started to lose the plot during this period or at least developed a bad attitude. Maybe dementia is catching? Is it wrong to fantasise about tripping the 70-year-old guy with the quadruple bypass running on the treadmill, or sticking a walking stick in the wheels of the exercise bike occupied by the 80-year-old with the new stent. I would devise rather elaborate plans in my mind of what to do to the oldies who could walk faster and further than me. I'm a bad person I know, but at least it kept me entertained for all those months. One thing I do love is that the elderly turn up to physio in their Sunday best, whereas I'd rock up in my old gym gear, stained runners and my hair just barely held back in an old hair elastic. Maybe that's the secret? If I wore pearls and got my hair "set" I'd be able to walk for more than 5 minutes without wanting to pass out. I hung out with the gang for a year before I broke free. I did half expect I'd have to endure a gang beat down with their zimmer frames and walking sticks in retribution for leaving.

Now it's the Masters Games and I must truly face the fact that I am not worthy of being an octogenarian, nonagenarian or even centenarian. A news article about a 100-year-old freak of nature, who can not only pick up a shot put but also throw it 5 metres, is not a feel good story to a 36-year-old woman who is unable to open a can of tomatoes thanks to her pathetically weak arms. Damn it grandma go home sit in your rocker and complain about your arthritis, your sluggish bowel and those kids with their evil devil music. Serve up curdled cream, pickled ox-tongue and year-old lamingtons like a normal Nanna (or was that just my gastronomically challenged Nanna?). That's what 100 year-old ladies should be doing, not playing with large metal balls and wearing short shorts. This spunky old Nanna and her hipster peeps may be more husk than flesh, have skin flaps that flutter in the wind, and arses that have completely disappeared, but they still wouldn't want me in their group. No matter how much prune juice I drink or how many tubes of liniment I have on my bathroom shelf, I will never be allowed in with the cool grey-haired kids. I will remain Nigel-no-friends with my abnormal disorder. 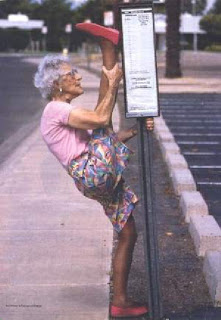 I must face facts. As much as I may wish it I am not an 80-year-old woman. Crap!

The unfortunately young Michelle :)
Posted by Michelle Roger at 17:26